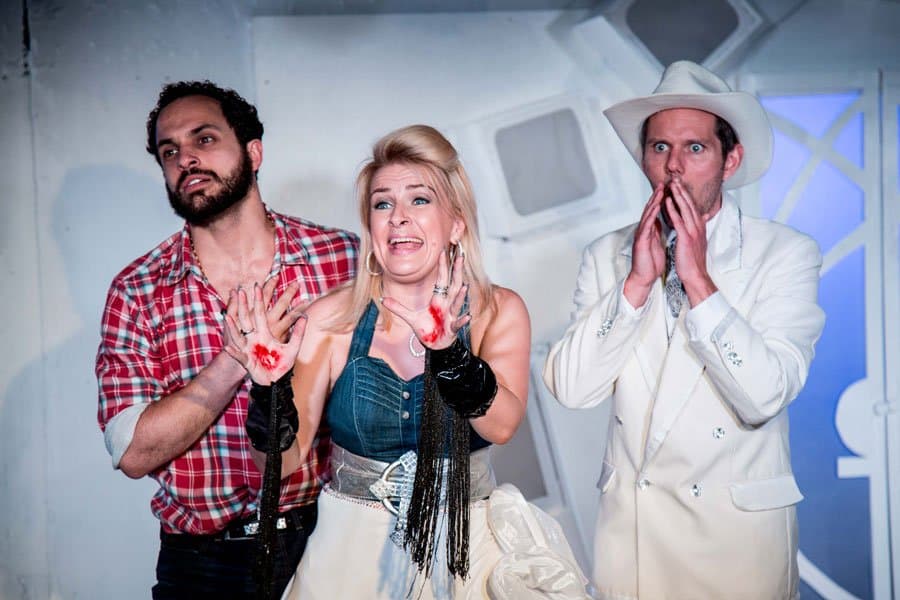 Indeed. This is a work that should be approached in the manner it is – I think – intended, namely, a bad-taste romp through religion, sex and the media, where the object is to have fun at all costs, regardless of any artistic or dramatic merit that might be striven for, and it may best be experienced through a devout haze of alcohol and – quite possibly – something rather stronger. I mean, this is on in Islington. At press night, someone was vaping through the second half, and perhaps that was indicative of broader ‘tendencies’ at play. Who knows?

If, on the other hand, you’re looking for something more substantial in this offering from ‘The Heather Brothers’, then ‘Abandon Hope, all ye who enter here!’. For years now, the authors of the book, music and lyrics of this raucously vulgar entertainment have specialised in concocting trashy, superficial burlesques that please audiences every bit as much as they antagonise thoughtful industry professionals and critics. I am fairly sure that this work will meet with a response similar to the receptions afforded earlier products, like ‘A Slice of Saturday Night’, a show that has racked up, according to a programme note, ‘well over 400 productions worldwide and has been translated into 9 languages’ (presumably not all performed simultaneously, although if they were then that would very likely not make one whit of difference to the show’s impact). To describe their fabrications as ‘shallow’ and ‘flimsy’ is to do nothing further than to state the obvious. And that is as it should be because their works specialise in doing precisely the same. Over and over again. Subtlety? No. They don’t do it. 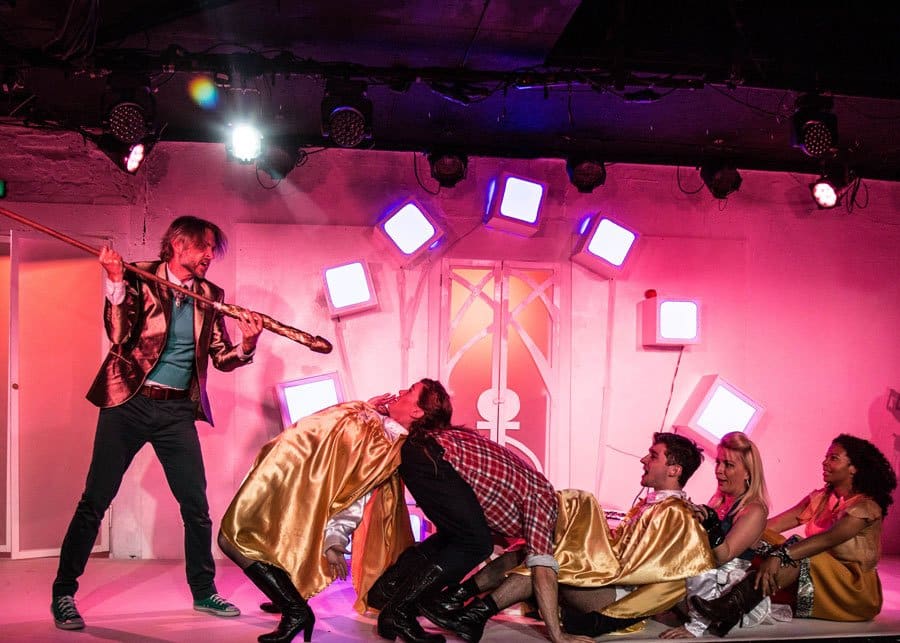 This, however, is more ‘adult’ fare than ‘A Slice’ (a show that has played for three long years aboard Cunard’s SS Queen Elizabeth). The designer, Zahra Mansouri, has clearly been shopping in sex shops, and there is a certain amount of not-very-used-looking erotic paraphernalia waved around under the noses of a tolerant if not vastly titillated audience, ahem, members during the duration of the presentation. Not a lot else makes it onto the stage in her budget, except for a suite of daywear and then 2nd Act fetish clothing for the always game cast: John Addison, is a trim and energetic TV personality, Bobby Del La Ray, whose performance recalls – very, very closely – his recent Jojo in ‘The Life’; Peter Bindloss, plays a pair of secondary characters much like those he has already done in ‘Jerry Springer’ (a show that this effort very slightly resembles); Letitia Hector, who gives us Destiny Jackson (we never find out what happened to Harmony, Symphony and Melody – this is not a show that troubles itself with verisimilitudinous backstories); and there is Arvid Larsen, who serves up someone called Rex Bedderman (geddit?); Rachel Marwood has her alter ego in the form of Clarissa LaFayette, something hesitantly approaching a femme fatale, or at least a vamp; and Nuno Queimado gets a brief, but welcome, chance to sparkle in Italian opera style as Vinnie Ginelli; and finally, Emma Salvo is meant to be the ‘Narrator’, but that useful function is confined to a few snatched asides (no sniggers!), and she is also someone called Victoria, non-royal, as well as forming a kinda one-person ‘Chorus’. 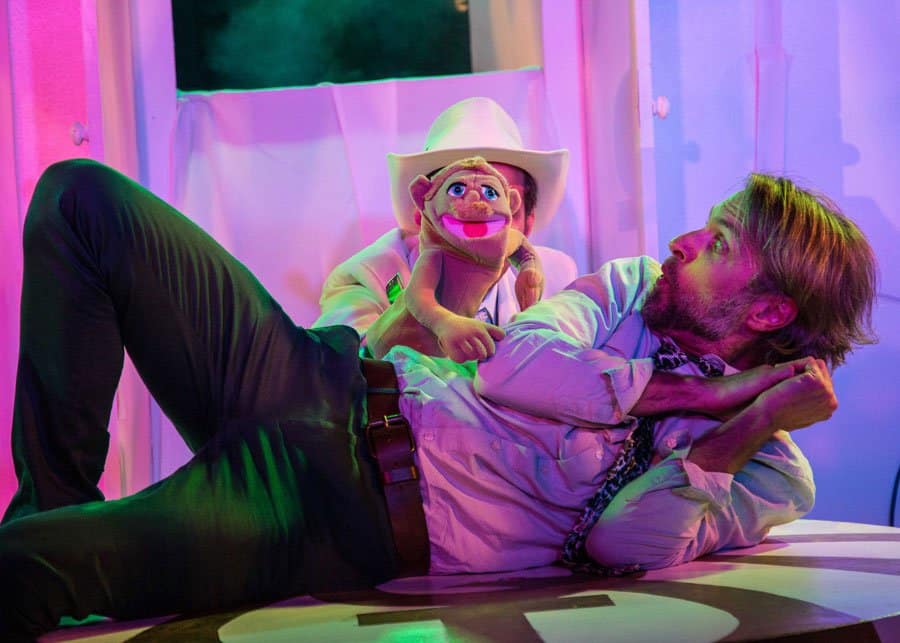 The score, bashed out in no-nonsense style by Ben Ferguson and Rickey Long on keys, with percussion and bass, is usually fairly functional, intermittently catchy, and very, very rarely soulful and involving, and forms a relentless pastiche of 60s pop songs. Why the Sixties? No idea. Absolutely none. Such questions are immaterial. Harry Linden-Johnson amps their instruments well enough, but he does the cast NO favours at all, and nearly all the (hardly distinguished) lyrics get muffed in a nearly but not quite incoherent mumble. Similarly, Nic Farman appears to be under instructions from his director, about whom more in a mo, to make a lot of fuss and absolutely no sense from rapid and chaotic lighting changes. It is all a glorious mess. Is it supposed to be? Well, I’m not actually sure.

The work is so poorly written – tatters of motivation or characterisation whizz past on winds of a dozen plots, none of them lingeringly long enough to establish any sense that we should pay them any attention – that it is difficult to gauge whether Benji Sperring knows what he’s doing… or not. I have to reserve judgement on that. Nick Thompson, the producer and general manager behind this spectacularly cheap and cheerful escapade seems to believe in the whole thing. But, apart from a brief moment in the second half, when all the posing (yes, in pouches and all) was briefly dropped and the show gingerly ventured a little glimmer of ‘realness’ to intrude, I never really believed in any of it.

For anyone expecting something as good as Sperring’s ‘Shock Treatment’ a grave disappointment lies in store; for anyone who doesn’t really care much one way or the other if a show has any substance or not, then this will not fail to deliver. There is, I think, somewhere, in the midst of all this nastiness, a rather interesting show struggling to get out, but it ain’t been found yet.