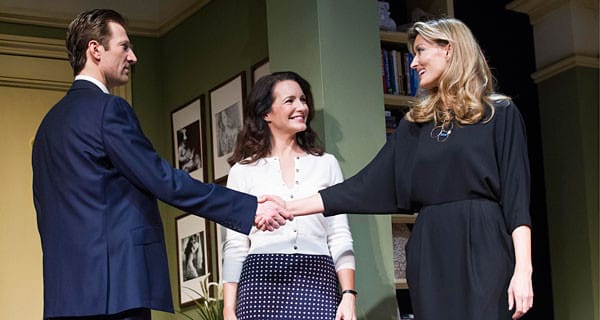 Trevor Nunn has helmed some truly wonderful theatrical productions and his place in the list of Important British Directors has long been secure. So the lamentable premiere production of Fatal Attraction (penned by James Dearden who wrote the famous film script) is made all the more curious, and disappointing, because he is attached to it.

Dearden claims in the programme:

“Because while Alex is undeniably borderline psychotic, she is also a tragic figure, worn down by a series of disappointments in love and the sheer brutality of living in New York as a single woman in a demanding career. So, whilst remaining faithful to the storyline, I have reintroduced the ambivalence of my earlier drafts…where each character has a point of view; nobody is entirely right and nobody entirely wrong. There are no white hats and black hats, which hopefully makes for a more rounded piece, which, whilst retaining a close relationship with the movie, has its own and separate identity.”

Dearden is on the money about one thing: he has reintroduced ambivalence. For the audience.

The script is clunky, jarring, full of clichés, completely devoid of passion or any connection with human emotion and, well, trite. The narrative is presented in first person addresses to the audience from Dan, the infidelity apologist, in a move which is counter-productive to any sense of rising tension and which, oddly, evokes memories of Nunn’s production of Sunset Boulevarde. Add the insane woman, Alex, who loves said narrator and the memories seem more than memories.

When you add the opening montage, which is a sort of modern day modern dress ensemble moving slowly forward version of the Act One finale of Les Miserables, it is difficult not to think that Sir Trevor was so stumped by the script that he turned to any measure he could to try to engage the audience.

The play only achieves any kind of interest when snatches of Puccini’s Madame Butterfly is played, and then not for its clever use, but simply because of its inherent musical power. The underlying notion that Alex is “inspired” by Madame Butterfly is tedious and works entirely against Dearden’s notion that there are “no black hats” here.

The casting does not help.

Mark Bazeley is unfathomably bad as Dan, unconvincing as lawyer, father, husband, lover or harassed “good guy”. He is completely devoid of charm and the “electric” sexual attraction between he and Natascha McElhone’s Alex totally nonexistent. The moment when they first have lust filled sex is risible.

McElhone has moments of interest – most often when she is saying nothing, just watching or observing. But the extreme ends of Alex’ behaviour are uncontrolled and unbelievable; what might be chilling is just silly. Partly this is because she gets no support from Bazeley and partly it’s because the script is so naff – but McElhone is not blameless in the lousiness.

Whatever way you look at it, Alex is a complicated woman – not a grey piece of cardboard which only comes to life in the shadows when listening to Puccini.

Kristin Davis does her perky inoffensive best, but, quite strangely, her accent seemed as bad as the other two stars’ accents. She seems ill at ease in the role and the costumes she is forced to wear don’t help her to feel comfortable – she epitomises awkwardness.

Robert Jones’ set design is simply awful. It does nothing to encourage tension or provide atmosphere or tension. It could be a set for a rom-com more effectively.

Inexplicably, there is a lot of “New York crowd acting” – people crossing the stage or standing by a water cooler or meeting up in a park. All of it unnecessary, distracting and execrable.

No one sitting around us seemed to be having a good time and there was much disgruntlement at interval.

Apparently the ending of the play is different from the film. As that was in Act Two, and I had places where I could go to watch paint dry, I can’t tell you what the differences are.

God help those who can.