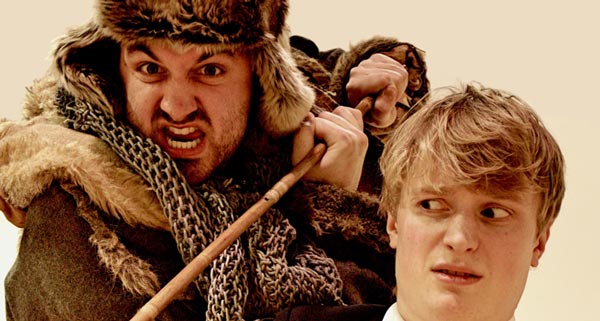 The very best part about seeing new work is that you never really know what you are in for. Famous, established writers or actors or directors can be involved in dud productions. Unknowns can produce theatrical alchemy. And things can be utterly unlike they sound or seem.

Beowulf was the first piece of literature I had to write an essay about at University. A big, sprawling epic poem, full of archaic turns of phrase and said to be, according to the learned tutor, the most potent example of traditional verbal storytelling, handed down through generations, and finally reduced to writing. A kind of verbatim poetry. Hard work but engrossing in parts.

Autojeu Theatre is now presenting Beowulf at the Etcetera Theatre in Camden. It might bear the same name as the great poem, but that is where the similarities begin and end.

It’s a theatrical piece, presumably devised by its two stars: Sam Gibbs and Pete Buffery. Part improvisation, part slick comedy routine, part pantomime, part musical, part physical theatre, part arrant nonsense, this Beowulf is an imaginative comic romp through the tulips that edge alongside and around the footsteps left by vaudeville. It defies categorisation, and not in a bad way.

At its heart is an unlikely, but genuinely remarkable, comic duo. Gibbs is the bearded, blokey, male diva who tells his version of the Beowulf tale to the audience, playing all the parts, with wit and irreverence, and smashing through the fourth wall when there is a laugh to be had or a patron to be singled out for attention. From his playing perspective, he is all that matters; some blonde musician is there as a living sound effects machine.

Blondie (Buffery) sees it differently. From his playing perspective, this is a proper double act, both performers being integral to the success of the performance. He is outraged by Gibbs’ hogging of the limelight and dismissive attitude towards him. So he plots revenge, determined to have his proper place when it comes to the bows.

With that set-up, the pair present a silly tale of a silly Beowulf having silly adventures and slaying far from silly dragons. It adheres in a very loose fashion to the events set out in the old poem, but the interest here is not in the tale itself but in the way it is told.

Both Gibbs and Buffery are excellent, but very different, clowns and both have that rare skill: the ability to hook an audience with a simple glance, a sly smirk or a perfectly timed raise of the eyebrow. The best moments in this Beowulf occur when they are sparking off each other, creating laughter with their synchronicity, superb timing and genial (fake) contempt for each other.

Gibbs has a lot of material to play with, as the bulk of the work of the piece falls on his shoulders. He is endlessly inventive in the way he creates different characters and tells the tale, effortlessly switching voices and posture to suit whatever is occurring in the narrative. He gets extra points for his ridiculous miming, especially the mirror-ball enhanced swimming sequence. (Extra points if, as it seemed, his antics were based on Shelley Winters’ underwater heroics in The Poseidon Adventure)

Buffery is no slouch in the comedy department either. He is exemplary at dead pan stares that Jack Benny would have admired and ably fulfils the Madge Allsop role in this routine. He is a good vocalist and his compositions (presumably they are his) are intriguing and attractive; he is a dab hand with a range of instruments each of which he plays with assuredness, providing very amusing, and perfectly timed, sound effects to Gibbs’ activities,

The piece is slightly too long (even at about 60 minutes) and for too much of the performance Buffery has nothing to do. But it is undeniably inventive and there are many laughs created. Especial highlights include Buffery’s vocalisations of the sounds of the swords Gibb’s hero swings, the sequence where the control of the percussive sound that signifies the speed at which Beowulf’s armies advance passes from Gibbs to Buffery and the glorious section where Gibbs plays two lovers hand in hand.

On its website, Autojeu says: “As a company we see the limits of creativity and play that are imposed on children, so with our work we encourage children to embrace play as well as help adults re-discover their youth and remember what it is like to ‘play’. Play is not just harmlessly being silly, it is a mentality, a mentality that can (and should) be brought into the workplace and everyday life, we hope with our work to bring play to our audiences. Play is not just harmless fun, it’s finding fun in everything. Play can be found in some of the most unusual places. It can be found while lying to your boss about why you are late to work, when you’ve missed the last bus home, after you’ve buried a loved family pet. Play is there to be found, and that is what we seek to do.”

True to their word, they find the fun in an unlikely place – Beowulf.

Well worth seeing for something completely different.