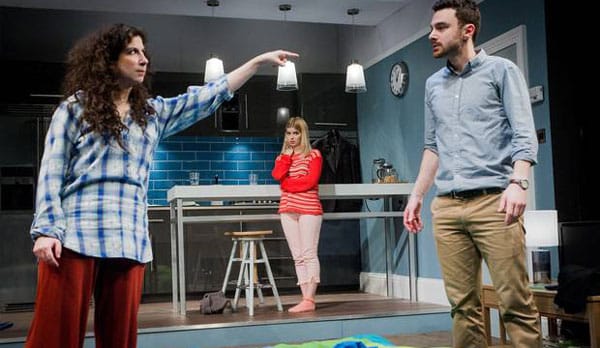 Three out of four are Jews. The younger brother seems sweet, with hair that begs to be tousled, and a simple view about life and a disinclination to fuss or argue. The cousin is feisty, fiery, argumentative, cruel, confrontational, snide and self-righteous to the point of hysteria – and not blonde and not conventionally attractive. The older brother is a typical Alpha Male, used to the trappings of wealth, fastidious and imperious, a collector of trophy girlfriends. His latest girlfriend is pretty, simple and warm-hearted – and very blonde.

Or so it seems.

One is a fantasist who hides behind religious zeal and tradition to hide the cracks in their life and create a persona that might bring solace and meaning to their unhappy existence. One is a secret believer, an adherent to tradition without being showy about it. One is warm-hearted and open minded, willing to see all sides. One is the kind of person who uses religion as a tool whoever it suits a particular purpose.

The question is which of the four characters, three related and one not, have which underlying characteristic?

Bad Jews, by Joshua Harmon, now playing at the St James Theatre, following a successful season at the Ustinov Theatre in Bath, is billed as a new comedy. It is nothing of the kind.

What it is, however, is a taut, tense and tightly written play, with plenty of laughs, some of the very uncomfortable kind, which takes a good hard look at the role of religion in modern America – specifically Judaism, but there is a universality about the work which should touch anyone who has ever had a relative who adhered to a particular faith.

The plot is simple enough. Grandfather has died. Younger son and cousin attended the funeral but older son and his girlfriend missed it. They return from overseas the night of the funeral to find they have to share a small Studio in the Upper West Side of Manhattan with younger brother and cousin, who have been there for two days.

Cousin wants her Grandfather’s “chai”, a religious relic made from gold which he managed to keep from the Nazis for two years while World War Two raged. Grandfather’s will does not specify who should receive it and the brothers’ mother has suggested they and the cousin work it out. Older brother wants the “chai” and is emphatic that cousin should not have it.

Cue bitter, savage and profane speeches from cousin and older brother about each other, each other’s attitude to religion and each’s “right” to the relic. Little brother and the girlfriend are dragged into the dispute and both suffer considerable collateral damage, sometimes quietly, sometimes not. Eventually there is actual physical assault and irreparable harm is caused. In the final moments, there is a delightful twist which serves to underline the complete folly of the terse tendentious tirades that have formed the bulk of the play.

Harmon writes vicious dialogue fearlessly and with potent froth. The characters are clearly defined by their speech and each seems real, accessible – possibly someone you might know. There are several real surprises along the way and not much ends up as it first seems. It is a sharp, clever piece of writing.

It is also an exercise in misogynist off-handedness. No female character comes out of this play at all well. The dead Grandmother is “a bitch”. The boys’ unseen mother is, at best, duplicitous, at worst a shocking Aunt. The girlfriend turns out to be as self-interested and weak as the cousin, albeit for different reasons, and neither of them live up to their own advertising. The cousin is revealed to be a complete fake; a vicious, insensitive hag who screams and kicks until she gets her way and then collapses in a puff of spinelessness. Why should the female characters bear these burdens?

Especially when the younger brother, although a little spineless in some respects, is the best character, the one who loves and respects all, the one who can turn the other cheek, the one who misses his Grandfather because he was his Grandfather, not because of what his death entitles him to receive. And the older brother, though just as vile of tongue as the cousin, is set up to be favoured by the audience because of his later entrance and the way his “righteous” claim to the “chai” is infused with romance and his place as oldest grandchild.

In seeking to capitalise on the comedy inherent in caricatures of American Jewish folk, Harmon utilises notions of the patriarchal society to underline his points. Could the play have worked equally as well with a brother and sister, a male cousin and a bimbo boyfriend? – almost certainly.

Nevertheless, director Michael Longhurst does his best to avoid these issues with excellent casting, and an energised, focussed set of performances which see the highs, lows and long, long pauses of uncomfortableness attacked with gusto. Even when you are squirming, or dreading the next moment, or realising what has just happened and what it will mean (which happens quite a bit), you are never not in the room with the characters, feeling the tension, pain and embarrassment.

The best, most complete, performance comes from Joe Coen who plays Jonah, the little brother. He has less dialogue than the others, but is constantly on stage, always watching, reacting, anticipating, trying to peace keep. His gentle disposition contrasts superbly with the warring cousins and his ability to communicate, non-verbally, his distress, fear or alarm is exemplary. His final moments are beautifully judged.

As the antagonistic and aggressive Daphna, Jenna Augen is a vitriolic thundercloud of repressed and hidden hatred, jealousy and angst, while at the same time demonstrating an able wit, a keen and tenacious intelligence and endless capacity for jealousy and pain. It’s a wonderfully complex and intricate performance. Daphna is a difficult character to love, but Augen permits us to see why she should be tolerated, perhaps even admired. Given the writing, that is real skill.

Ilan Goodman is excellent as the entitled shit, Liam. His contempt for Daphna is as palpable as his love/lust for the hapless Melody upon whom he inflicts the internal wars of his family. But Goodman excels at walking the line of frenzied harassment and indignant rage, presenting a character who is unpleasant but understandable and who does, at least occasionally, try to calm the waters and be a better person. Again, given the acidity apparent in the writing, Goodman shines in achieving this level of empathy.

As the startled, gorgeous, blonde non-Jew, Melody, Gina Bramhill is quite superb. Her tentative and appalling version of Gershwin’s Summertime is a moment of cruel, comic beauty. She convinces as the befuddled interloper, the girl in love with Liam, and then as not quite what she might have seemed to be. Bramhill is sweet, dignified and quite glorious.

Richard Kent’s set is superb, completely evoking the sense of wealth implicit in an Upper West Side studio apartment which probably cost more than $1 million. It’s stylish and utterly perfect in terms of layout and feel. You are completely and authentically transported to Manhattan.

If there is a serious flaw with the production, it lies in the key fight scene which occurs late in the play. Bret Yount’s realisation of that key – and appallingly vicious scene – is not as realistic as it needs to be, which dilutes the overall effectiveness of the piece. The scrap between all four actors needs to be realistic and painful to endure – and it is not. This is not a question of the actors failing, but rather that Yount has not come up with the goods. It is the key moment in the play and deserves better.

Kudos to St James for bringing in Longhurt’s production from Bath. This is a great evening of acerbic family drama which makes you laugh, chills you to the bone and leaves you with plenty to ponder afterwards.