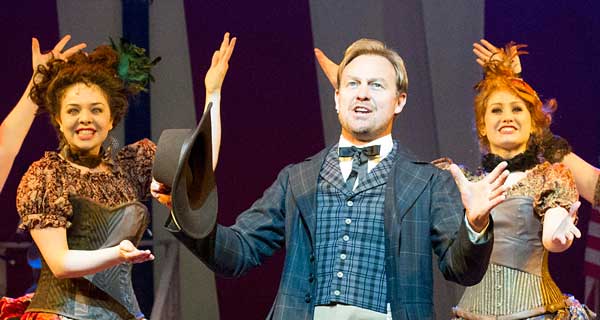 In August it was announced that the UK tour of Irving Berlin’s Annie Get Your Gun would close early, with its final performance at the New Wimbledon Theatre on September 13. Final nights can be tricky things: they can be joyous affairs full of “one last hurrah” moments or dull, limp “can we just go home please” lacklustre going-through-the-motions affairs.

At interval, a local Wimbledon woman, clutching her near comatose husband, as they fled to the the streets said: “It’s shit. He can’t act or sing and there is no point looking at him anymore. She’s good but it is not enough. Not for £30. This is nothing like show business”.

It was impossible not to agree.

Ian Talbot’s production of Annie Get Your Gun was, in every way, tawdry. This is a musical which needs great performers to make it work. The book, by Herbert and Dorothy Fields, was not the siblings’ best, most enduring work. It creaks and jars in any number of ways and there is nothing about the new material from Peter Stone (he tinkered for the Bernadette Peters Broadway Revival) which makes it fresh or immediate.

This was always a vehicle for Ethel Merman and Berlin provided a cracking good score. It’s a musical which requires genuine stars, because only with them can it achieve any kind of lustre, of joy; any kind of theatrical magic. And not just the leads, all of the parts need to be played with precision and care.

Musically, it needs an orchestra with lots of strings. Berlin’s music aches for a full orchestra and only with one do you get any sense of the spirit, energy and panache of the score. One violin and one double bass is just not enough. So much colour and precision is lost in the playing of the score that it is almost terminal.

Emma Williams is a classy performer. She has real talent, a great voice, beguiling charm and a quick easy manner on stage which makes her delectable to watch. But she is no Annie. At least not here, weighed down by tepid inept direction, a lamentable wig and an accent that was as varied as it was incomprehensible. Annie is a straightforward backwoods woman: gutsy, plain-speaking, driven and egotistical. None of those attributes were sufficiently on show here.

Which is a pity, because Williams is probably up to the task. She can certainly sing the score, and if unleashed with full throttle, and with a leading man who actually participated in their scenes together, she may have lit up the stage as a good Annie should. Not, however, with that wig.

Jason Donovan brought new meaning to the expression “out of his depth” in his quite simply ludicrous and enervating turn as Frank Butler. There was nothing sharp about this sharpshooter. He looked embarrassed, “sang” like a guppy in a fishbowl, shuffled around the stage with fear and surprise radiating as every attempted dance step managed to be roughly in time. If he had been the fourth understudy for the title role, he could not have seemed more ill-at-ease or badly rehearsed.

Happily, I’m A Bad Bad Man, the song which really defines Frank, was cut so it did not have to be endured. Sitting through My Defences Are Down was torture enough. Donovan does not have the manly, booming baritone for the role and his attempts to croon the material were doomed from the outset.

Watching Donovan play the egotistical, vain and virile Frank Butler was like watching a pair of wet socks dry on a radiator: consistently unsurprising, deathly dull and loaded with a whiff of a slightly fetid aroma. It was not necessary to hear Anything You Can Do I Can Do Better to know that Williams could do everything better than Donovan.

YIftach Mizrahi shone as Tommy Keeler, all smiles and exuberant roustabout joy. William Oxborrow did not let the detritus around him interfere with his excellent portrayal of Charlie Davenport and Kara Lane and Lorna Watt were quite lovely as the Tate sisters.

Norman Pace made a complete mess of Buffalo Bill and Dermot Canavan seemed to think that he was in pantomime as Foster Wilson and Pawnee Bill. Ed Currie, atypically for him, was dire as Sitting Bull; almost offensively so.

There is only one way to approach Annie Get Your Gun: wholeheartedly. It is a period piece for stars; it tells a silly tale from a long ago time. It has nothing relevant to say, but presented the right way, it can be a dazzling night at the theatre.

But you need a director who knows that, an orchestra that can make Berlin’s score fly and someone other than a wet sock as Frank Butler before you can hope to be dazzled.