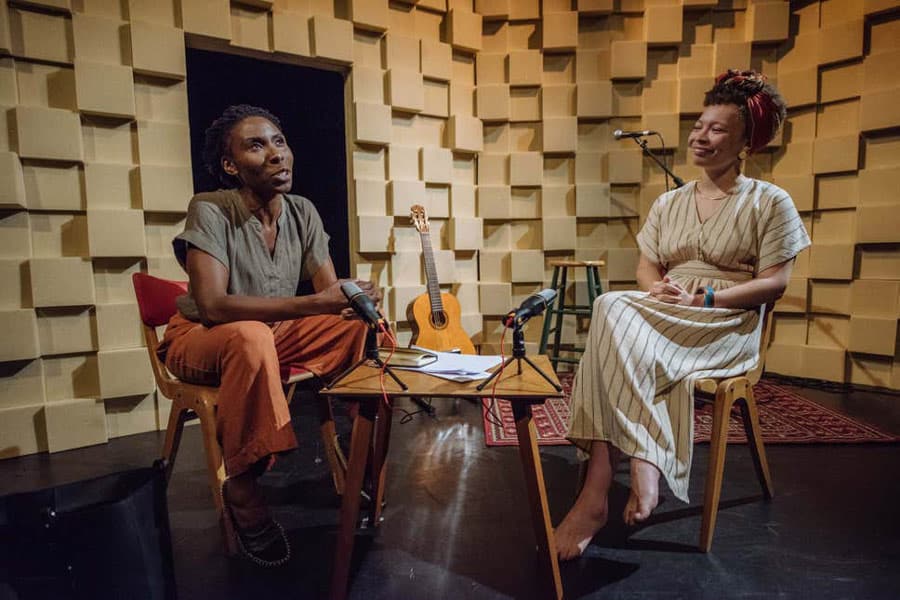 In her debut play Anguis, Sheila Atim has come up with a wonderfully inventive concept to explore ideas around truth and what it means to be a woman. She has plucked the great Egyptian pharaoh Cleopatra from the heavenly fields of Aaru and brought her into a broadcast studio to be interviewed for a podcast. Incredibly smart, a little bit of a snob, and very much a modern feminist, this Cleopatra challenges traditional images of herself through man-made history, not least the improbable “fact” that she killed herself with poison from an asp bite.

But Anguis is equally about the interviewer, Dr Kate Williams, a high-flying virologist who is focusing on her monthly podcasts while dealing with her own demons linked to a career break. Through their conversation, the play explores how much we are able to control the truth about our own lives, especially when, for women, those lives are too often represented in terms of men. Cleopatra ruled Egypt for 21 years but even Kate catches herself asking questions about her lovers Mark Antony and Julius Caesar.

The format of the podcast is like Desert Island Discs with live music, and it turns out Cleopatra’s skills extend to her being a brilliant guitarist and singer. Played with imposing dignity by Paksie Vernon, she performs a series of beautiful and powerful songs such as the moving “Shadow of My Heart”. Janet Kumah is also impressive as Kate, strong on the surface but crumbling underneath.

This is a promising writing debut from Atim who is best known as an actor, including her Olivier-winning role in Girl from the North Country. Tightly directed by Lucy Jane Atkinson, it throws around some topical ideas about truth and womanhood although it is not always clear how the two women’s experiences relate to each other within the action of the play. But, with two fine central performances, well supported by Peter Losasso as the sound engineer, Anguis confirms Atim as an exciting new voice in theatre.