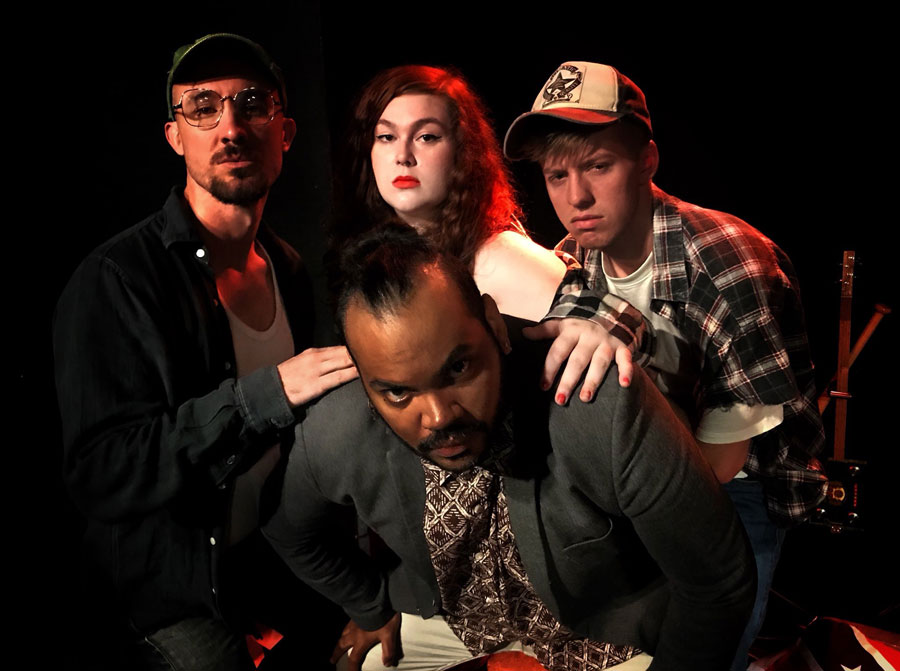 The gothic horror of America’s Deep South is conjured up in Hippana Theatre’s entertaining new show, Alabama God Damn. In a captivating piece of storytelling accompanied by live music, the three-strong cast take us into the richly imagined world of a small town in Alabama, from dive bar and diner to church and gas station.

We follow Frank who is returning to his home town for a funeral after putting his country life behind him to flee some years earlier to the city of Charlotte in North Carolina. He sets out to investigate the apparent suicide of his best friend Virgil which re-acquaints him with old haunts, old friends and old enemies including Kyle Tremblay, the town’s self-appointed boss and owner of the rapacious KKK Loan Company.

Ashley Driver leads the narration as the troubled Frank whose life goes into freefall as he tries to find out what happened to his friend and to confront his own past, while Sarah Connolly is excellent as his worn-down childhood friend Roxy. In pretty much every other role, Olivier Leclair is phenomenal, impressively switching from character to character with apparent ease and little else but a different baseball cap to help signal the change.

Written by Leclair and Paul Harris, the show is a dark delight, with plenty of black humour and touches of gruesome southern gothic and disturbing violence. Under director Kieran Fay, it is a slickly told tale energised by a fantastic live bluesy soundtrack that helps transport you to the murky beating heart of rural Alabama.