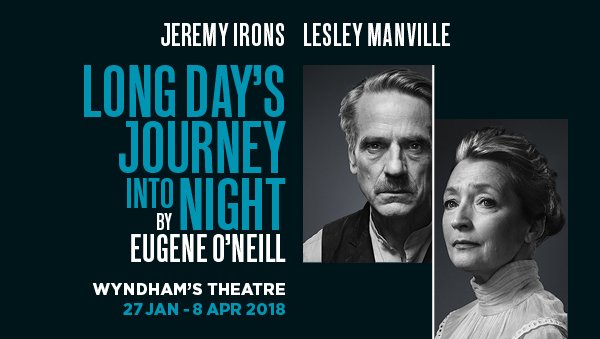 The Tyrones’ summer home, August 1912. Haunted by the past but unable to face the truth of the present, the Tyrones and their two sons test the bonds of a family caught in a cycle of love and resentment. As day turns to night and the family indulge in their vices, the truth unravels leaving behind a quartet of ruined lives.

One of the UK’s leading and critically acclaimed actors, Academy, Golden Globe and Tony Award-winner, Jeremy Irons returns to the London stage for the first time in over ten years. He is joined by BAFTA and Olivier Award-winner Lesley Manville, one of Britain’s most respected actresses, who is reunited with director Richard Eyre following their critically acclaimed, sold-out production of Ibsen’s Ghosts.

Considered one of the most powerful American plays of the 20th century, Long Day’s Journey Into Night plays a strictly limited season at Wyndham’s Theatre, London from 27 January 2018 for 10 weeks only.

Priority booking for BritishTheatre.com is now open until 2pm.