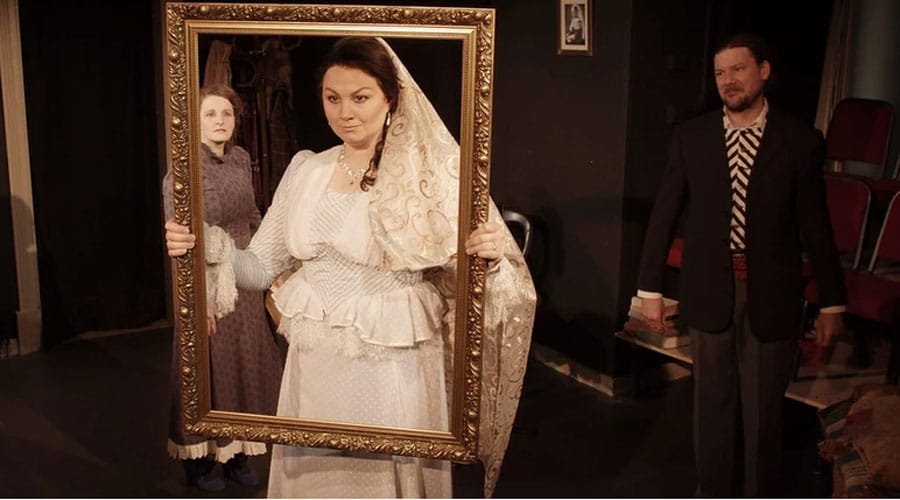 Originally presented at the Exmoor Studios in Somerset from May to June 2021, this revival of J M Barrie’s comedy The Twelve Pound Look is now streaming on StreamTheatreNow.com.

It was adapted by Charlotte Ellen of Betwixt-and-Between who has produced the show with Helena Payne of Pleasure Dome. Filming was by Middle Realm Productions.

The Twelve Pound Look was first staged in 1910. Barrie’s other works include plays such as Quality Street, The Admirable Crichton and Dear Brutus and the international classic Peter Pan.

Established in 2019 our first show, Peter Pan in Kensington Gardens opened in London, Dumfries and Edinburgh in July before touring to Poland in December and getting franchised to Alaska. Unfortunately, their 2020 UK tour was postponed due to Coronavirus.

Pleasure Dome is based in Exmoor, formed to stage theatre in The Valley of Rocks near Lynton in North Devon. More recently it has been working on productions for the newly created Exmoor Studios.

The Twelve Pound Look is adapted by Charlotte Ellen of Betwixt and Between who together with Pleasure Dome’s Helena Payne also produced the play described by Pleasure Dome as a “funny and surprisingly modern twist on domestic bliss”.

The Twelve Pound look is streaming until 11 July 2021 through StreamTheatreNow.com. Viewing passes last for 24 hours and are £12.50 plus £2.50 booking fee running from 10am each day.