Lin-Manuel Miranda’s blockbuster musical Hamilton is being released over a year early thanks to the COVID-19 pandemic and here’s what you need to know.

Originally scheduled to hit cinemas worldwide next October 2021, someone decided that Disney Plus might want to start showing this recording of Hamilton the musical shot on the stage of the Richard Rodgers Theatre given that they reported paid $USD70 million for the privilege.

It’s going to be a huge test for Disney’s server capability as Hamilton – the most in-demand theatre in the world comes to an online platform where you can watch it as many times as you want for £5.99 a month instead of $599 for a single Broadway seat.

Here are the answers to some of the questions we’ve seen floating around the internet over the past week.

WHO’S IN THE FILMED VERSION OF HAMILTON?

What you will see was filmed in 2016, features the original Broadway Cast including Lin-Manual, Chris Jackson, Phillipa Soo, Jonathan Groff, Daveed Diggs, Lesley Odom Jr, Renee Elise Goldsberry amongst others feature in this amazing looking recording that was shot over three days by original production director Thomas Kail.

IS IT SUITABLE FOR CHILDREN?

Definitely. It’s American history, but it’s embraced by students, kids, parents and grandparents around the world in a way that has not been seen before. The show when seem like on Broadway has a few choice words in it that many thought might make Disney blush and hit the bleep button, but it seems that Lin-Manual may have been the instigator on this. In a tweet this week he explained – 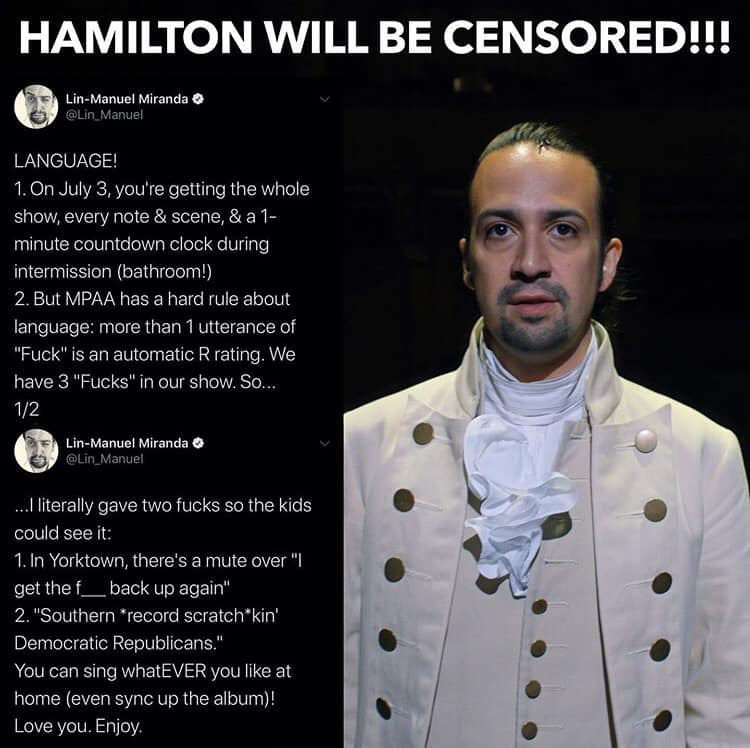 HOW LONG WILL HAMILTON BE ON DISNEY PLUS?

Nobody knows for sure, but we are guessing it might disappear when (and we hope it’s not an IF) theatres re-open and live performances resume. Enjoy it whilst you can. Once it’s gone that’s it, Its eyes only, no saving a copy Disney doesn’t allow that.

IS THERE AN INTERMISSION?

WHEN DOES THE SHOW BECOME AVAILABLE IN THE UK?

Hamilton has now debuted on Disney Plus in the UK. Enjoy!

More on Hamilton the musical

TAKE A LOOK AT THE HOTTEST TRAILER ON THE INTERNET