With the imminent arrival of Lin-Manuel Miranda’s musical Hamilton at the Victoria Palace Theatre in London, we thought a beginner’s guide might be in order for those of you Brits who are new to the world of Hamilton.

Alexander Hamilton was born in 1755 (or possibly 1757) in Charlestown , Nevisto a Scottish father and mother of French/English ancestry.  Orphaned after hismother’s death and father’s abandonment, Hamilton grew up in the care of a cousin and a merchant family, later being sponsored to travel to gain an education at King’s College (now Columbia University).

Hamilton was one of the founding father of the United States, the founder of the US financial system, an interpreter and promoter of the US Constitution. He was active in helping to end the slave trade and was responsible for the creation of the US Coast Guard.

Hamilton was mortaly wounded in a duel with Vice President Aaron Burr in 1804) and died the next day.

Since the start of the American Civil War, Hamilton has been depicted on more US currency denominations than anyone else having appeared on the $2, $5, $10, $20, $50 and $1000 notes. Hamilton the musical was about to be removed from the $10 bill but the popularity of the musical stopped this from happening.

HOW DID LIN-MANUEL FIND OUT ABOUT HAMILTON?

Much of Hamilton was inspired when Lin-Manuel Miranda read Ron Chernow’s biography of Hamilton published by Penguin Books. He bought the book to read on vacation in 2008. Lin-Manuel has stated that he realised that Hamilton’s story was one which he felt could be told through the medium of Hip-Hop. Lin-Manuel had previously written the Tony Award-winning musical In The Heights which fused traditional musical theatre elements with  hip-hop and modern musical styles, but Hamilton would take this marriage of styles to a whole new level. 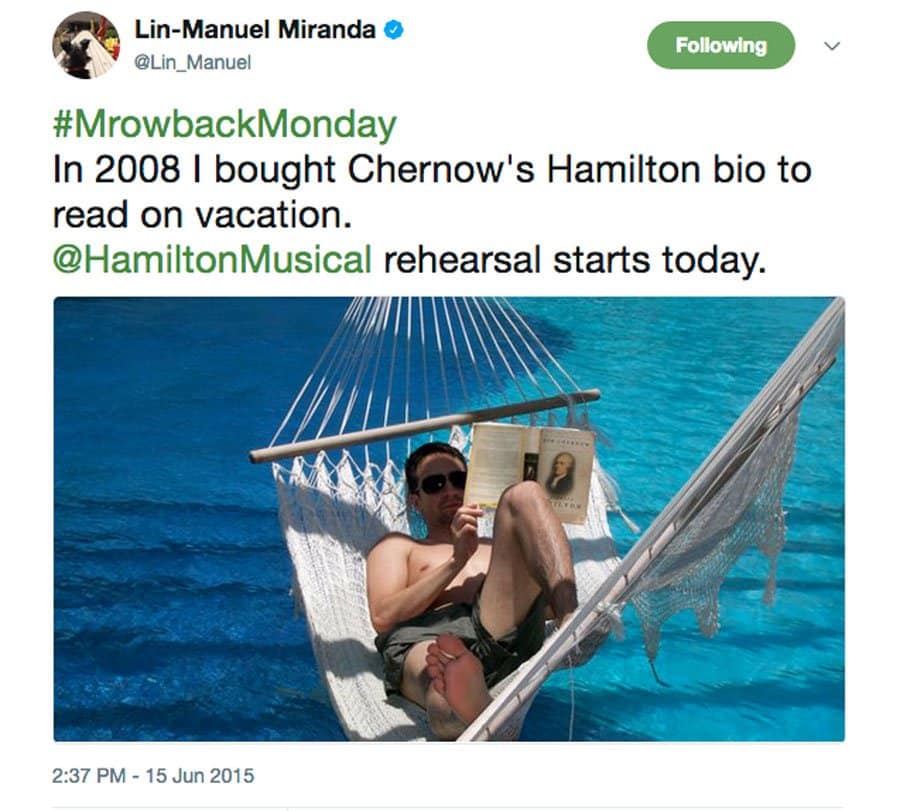 Lin-Manuel originally conceived that Hamilton might first take the form of a concept recording (much the same way that both Jesus Christ Superstar and Evita had done) which he was going to call The Hamilton Mixtapes, but things were not to go as planned. We will come back to Mixtapes later.

Invited by President Obama to perform at an evening of the spoken word at the White House, Lin-Manuel was to perform a preliminary version of the opening of Hamilton with the show’s future musical director Alex Lacamoire on piano. What he didn’t know was that this short performance was to change everything!

Watch out for Part Two of our guide to Hamilton.