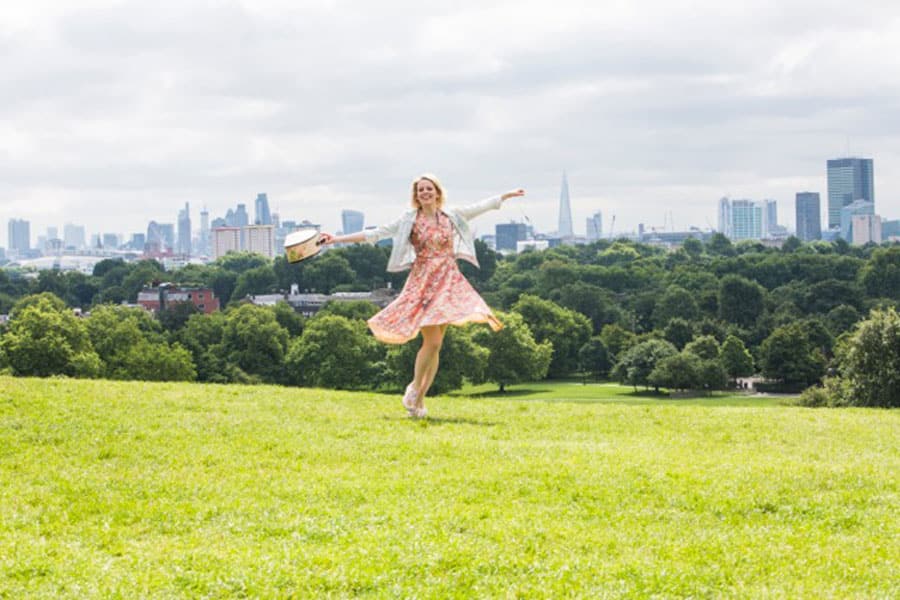 What Would Julie Do?
The Pheasantry, King’s Road
4th February 2018
3 Stars

There was a moment towards the end of the second half of this show, which is a kind of spoof self-help therapy session led by a kind of avatar of Julie Andrews, at the famous Chelsea cabaret spot when the headliner guest, Sophie Linder-Lee, thanked the ostensible star and would-be Andrews impersonator, Rosie Williamson, for organising the event, pointing out that such opportunities are few and that putting them together is a significant undertaking and one for which we should all be grateful.  She could have found nothing truer to say.

Linder-Lee is quite a find.  Her powerfully flexible and wonderfully accurate voice, as well as her attractive stage presence virtually monopolised the stage after the intermission.  And with good reason.  She started with a splendid second-act opener: the pretty soft-rock waltz of ‘Ready to take doctor’s orders’: a ballsy belter, and a completely convincing impersonation of an American voice by the Nottingham born West End diva-in-the-making.  Her subsequent switch into her native brogue came as a total surprise.  Linder-Lee went on to give us another compelling performance in a welcome plug for Southwark Playhouse’s forthcoming production of ‘The Rink’, letting us all get to know ‘Where are my coloured lights’, soon to be sung there by Caroline O’Connor in an eagerly awaited production by Adam Lenson.  This is one of the great usefulnesses of cabaret: developing new audiences for hitherto unfamiliar work.  On the basis of her wonderful rendition of this beautiful number, I’m sure plenty of punters hurried to book for that show, and to tell their friends about it, too.  This kind of generosity is what showbusiness is all about.  And Linder-Lee can carry it off, because she knows exactly how to ‘sell’ the numbers she chooses, including an exquisite Miss Honey’s ‘It isn’t much, but it is enough for me’ from ‘Matilda‘, some sharply rhymed verses here in a self-penned parody of ‘The Wizard and Me’, another waltzing ballad, ‘It Gets Lonely’, displaying a rich, almost plummy quality in her fascinatingly versatile voice, and a splendid torch song, ‘Goodbye Joe’, from ‘Second On The Aisle’, which merged perfectly into a much more up-tempo patter number of the Twenties pastiche, ‘I’m Gonna Miss You, Baby’, and a ukelele self-accompanied spoof of ‘The Jungle Book’s, ‘I Wan’na Be Like You’.  It was quite a set.

Before this, closing the first half, we got a terrific duet from Dev Joshi, really showing off her rock voice creds in a stonking duet with Nora Perone of ‘Rent’s ‘Love Me Or Leave me’.  This repertoire really suited their voices, especially Joshi’s, whose voice is maturing is a really thrilling way.  Earlier, we had had a gutsy, and near flawless, rendition by Perone of the patter section of ‘Not Getting Married’ from Sondheim’s ‘Company’ – she has the magnificent deadpan comedic face of a Virginia O’Brien or a young Mary Wickes, with eyes that communicate a hundred subtle shades of surprise, alarm, disbelief, dismay and more.  They were both clearly totally on top of their material, and pointed the witty lyrics in their numbers with great aplomb.  These are bracing new talents and just the kind of artists this event is designed to showcase.  Above all, it was great to see such dramatic performances from these committed, emotionally expressive artists, putting themselves entirely at the service of the material.

On slightly less secure ground, Sarah Day was content to stand at the mic and sing.  She gave us a couple of numbers, and it was notable how much less interesting they were when sung ‘straight’: anthemic titles like Judy Garland’s ‘Get Happy’ need a great deal more energy than that.  However, at least we got all the notes that the composers wrote for them.  Much less lucky was the compere, Ms Williamson.  Rodgers and Hammerstein is a repertoire that demands an absolutely flawless technique: it is mercilessly exposed writing and if you don’t have completely reliable intonation and the breath control and support of a long distance athlete, then you are probably best advised to leave it alone.  You will come unstuck.  And so Ms Williamson did, time and time again falling off notes, running out of puff, attacking the higher register from underneath, and so on.  Not that her fans, who had attended in reasonable numbers, seemed in the least to mind.  In fact, I think they find her struggles with this oeuvre rather endearing.  Well, that’s fair enough, but the reason Dick Rodgers loved Julie Andrews so much was that she was such a good technician.  To take her, as Rosie does, as the inspiration for a cabaret series, and then to fall so far short of her standards is, well, problematic.  It may not trouble the hardcore follower, but it didn’t make it easy for me to warm to this.  Sorry.  You will have to make up your own mind.

Meanwhile, the music itself came from the pianist, Dan Turek, and the guitar of Mr Williamson, Jonathan Kirwan, who capably did everything expected of them, and more.  There was also food served up in the ‘cabaret seating’ arrangement of the venue, and – unusually – on this occasion I departed from my usual exclusive focus on the show to delve into the menu.  Suffice it to say that that is not an experience I will ever be repeating.  My advice to you is that if you are ever attending this venue to hear the usually great music on offer – and I have spent many evenings here, and heard much that is marvellous and memorable – don’t touch the food.