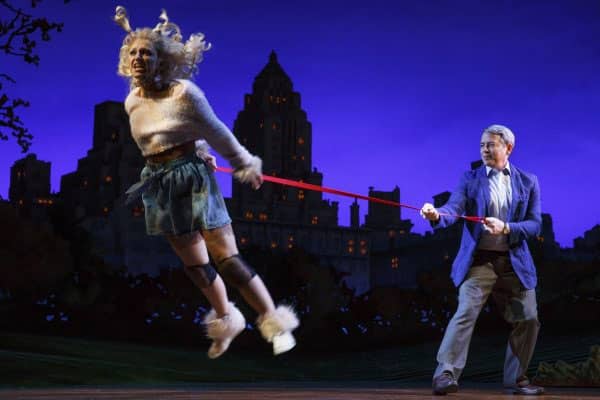 A businessman is enjoying the Park. A dog bounds up to him. They bond. He reads her tag, discovers her name is Sylvia, and then steals her. He takes Sylvia home, clearly smitten by the notion of a woman in his life who will love him unconditionally and never really argue with him. Unlike his wife of more than twenty years, the mother of his children, his childhood sweetheart.

He foists Sylvia upon his wife, insists that the dog join the family, regardless of what the wife thinks. He permits Sylvia’s needs to take priority and, frankly, he seems unnaturally obsessed with Sylvia, to the extent that he is jealous of the dogs with whom she ruts when in heat. He lets his marriage sail into choppy waters and come dangerously close to sinking.

Who will win in this war between wife and bitch?

This is the Broadway revival of Sylvia, A.R. Gurney’s curious play now playing at the Cort Theatre. Directed by Daniel Sullivan (who, at the preview I saw, was taking many notes), this is the kind of revival which makes one wonder why some plays ever get revived. It’s a fractious, hopeless, misogynistic stream of puerile tosh – at least in this vision of it.

One imagines that the real reason for the revival is that the central male character, the ageing businessman who steals the dog, Greg, presents a skilful, gifted actor with a real challenge: how do you keep the audience onside with this self-absorbed patriarchal prig? How do you unravel the nuances, the fears, the uncertainties, the fragile self-awareness of this difficult, complex character?

There are many ways to read the play, but the most obvious is probably correct. Sylvia is a metaphor for a trophy girlfriend; she is someone Greg can use to make himself feel better about himself, rather than actually work on his own complex personality issues. Someone he can effectively cheat with in front of his wife’s eyes, that he can challenge her with, that he can use to bring his wife to heel.

Self-evidently, there are Shakespearean aspects to the character: self-examination, self-realisation, self-loathing, procrastination and narcissism. At least. Greg is not a hero, but he is the central character. If the play is to work as other than a cheap, repulsive denigration of women, the actor playing Greg needs to be able to work something of a miracle.

Instead, here, Greg is played by Matthew Broderick. I use the word “played” in the loosest sense. Broderick says the words, but there is no acting going on. Impersonating Elmer Fudd is the best you can say of this squelching stream of vanilla rice pudding blandness. Still using the squeaky voice which seemed so endearing as Leo Bloom in The Producers, Broderick is not so much resting on his laurels as squashing them. There is no trace of the enigma that is Greg, no sign of the conflicts or the subtleties. Just a cartoon character with a silly voice, wishing he was hunting wabbits. 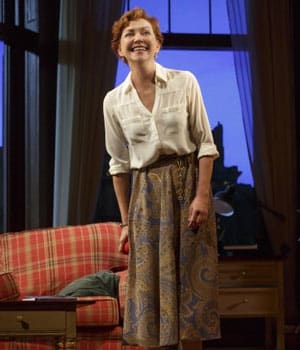 In stark contrast to this is Julie White, an actress with formidable skills, who is blisteringly good as the put-upon wife Kate. She bristles, melts, hurts and shines, making a real, complete and utterly conflicted character out of Greg’s shockingly treated wife. It is impossible not to feel Kate’s desolation and despair – White conveys the haunting pain with consummate ease.

She also manages to perfectly encapsulate the difficulty that Sylvia poses for Kate: on the one hand, she is a calculating rival, on the other she is a defenceless animal. White keeps those balls in the air and skewers the real cause of the tragedy here: Broderick’s selfish Greg. It’s a perfectly judged performance from White, all the more remarkable because of the lack of any kind of proper support from Broderick.

The delicious Annaleigh Ashford plays Sylvia. The conceit here is demanding: she must be a dog, but a dog that talks and does not move on all fours. Like a mer-canine, Sylvia is essentially part nubile woman, part bouncy labradoodle (or some such cross breed). Ashford is remarkable, physically flexible and engaging, but also determinedly ‘other’. White plays a woman; Ashford plays a she-dog, more human than animal, but with proper Scooby characteristics. There are moments when her spirit runs free and these are the most wondrous – there are other moments, when Sullivan’s hand is felt, when she seems foolishly restricted.

Ashford’s Sylvia is winning from the outset, and she imbues the character with edge and softness in equal parts. She is everyone’s idea of the perfect pet, but, at the same time, she does not shy away from the awful trophy-wife side to Sylvia’s being. It’s a complete performance, and there are moments when you do forget that she is, actually, human. When, in the closing scenes of the play, a huge photographic image of the real dog Sylvia is displayed, it is clearly a dog, but also clearly Ashford. Remarkable. 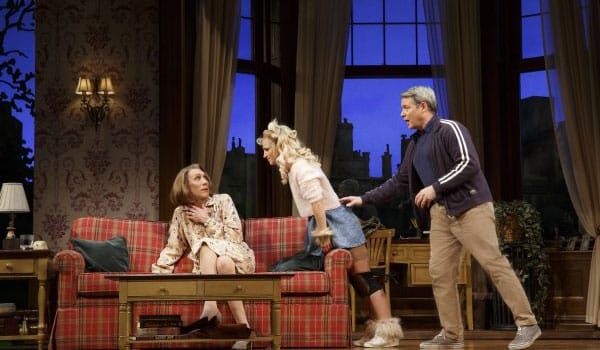 The play’s most obvious failure lies in supporting roles. One actor is asked to play three characters : a macho fellow dog-owner full of book learning , a snooty Vasser woman who is an old friend of Kate’s and whose genitalia, inexplicably, is irresistible to Sylvia, and an androgynous couples therapist who judges Kate and Greg’s marriage. At best, these characters are foolish; at worst, they actively undermine the play with objectionable and extraneous irrelevance.

The three parts are played well enough by Robert Sella, although both his Phyllis and Leslie (the woman and the question mark) are hideously stereotypical and the laughs are forced rather than natural. There are so many faux women in the character list of the play, it is bizarre.

David Rockwell’s design is suitably excessive – the green hues of Central Park are naive and unreal, which certainly matches Gurney’s narrative. Warm interior sets fly in and bring a sense of plush achievement to the domesticity of Greg, Kate and Sylvia. Japhy Weideman lights everything carefully and cleverly, bringing a sense of warmth where that is absent from performances or narrative.

Sullivan’s direction is stilted and unimaginative. The interesting underbelly of this theatrical beast is never itched. Only White’s exemplary efforts and Ashford’s winning guile lift this above the litter tray.

Kate makes a wry observation towards the end of the play, quoting the Third Act of Twelfth Night:

If this were played upon a stage now, I could
condemn it as an improbable fiction.

Book Tickets For Sylvia On Broadway