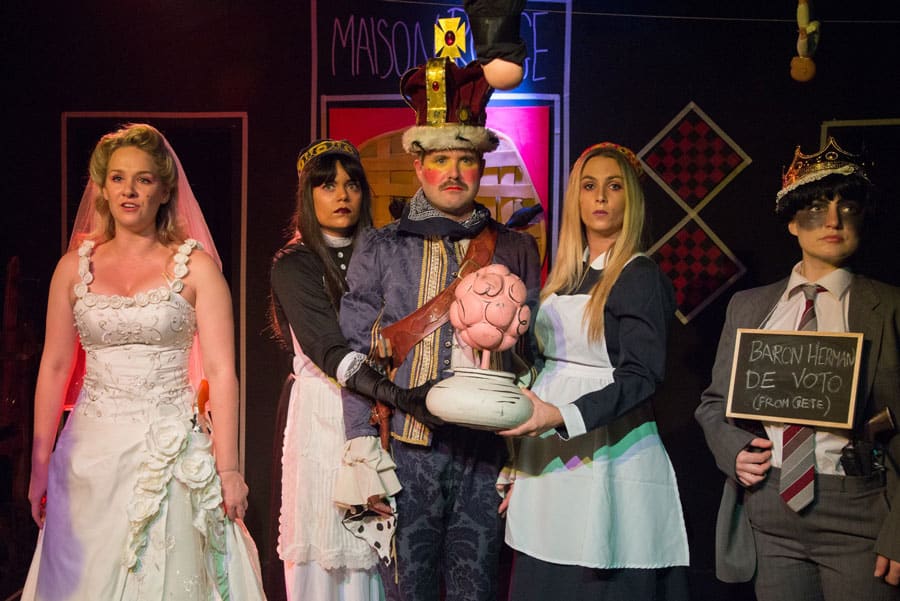 There’s a helpful article by the ever-fascinating director-producer-designer-choreographer (he also does the light and sound) Patrick Kennedy printed at the back of the cute Playbill programme for his production of Richard Foreman’s 70-minute stagework; it probably should be read first by anyone attending, or even thinking of attending, this entertainment, because it goes quite a long way to explain some very important things about the script.  Namely, there is nothing here of the conventional representation of character, plot, development, nor indeed is there much or any sense of location, time, relationships, motivation or in fact pretty much most of the usual things we expect to find in plays.  Foreman has simply – deliberately – excluded them from inclusion in this disciplined, taught, astringent and rigorous intellectual divertissement.  So, forewarned being forearmed, let us consider what it is. 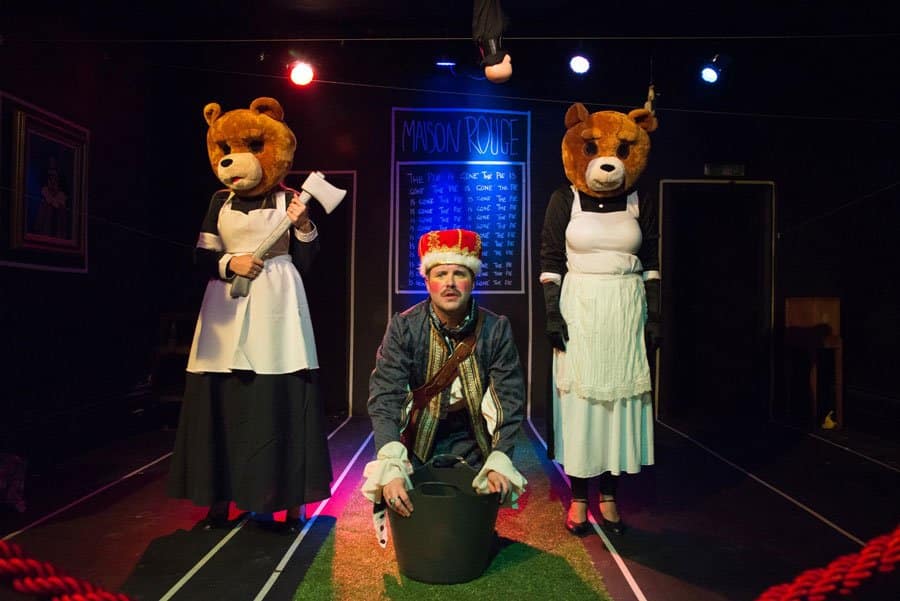 It begins in an ambience of brutal, harsh visual challenge, where the audience must first cover the obstacle course of the little black-white-and-red set in the 2nd-floor room above The Sun Inn at Leadenhall Market, a path strewn with female actors roughly intoning (in Russian), ‘Grab ’em by the pussy’, and criss-crossed by spider’s web strands of string, while audio-digital realisations of seven different pictures of President Donald Trump (whose image adorns the programme and the poster for the work, although he is never referred to in it by name) play coolly in their ears.  Once we are all seated, the door to the space is closed and the action begins.  It consists of a sequence of very many very short tableaux, mostly static, in which four women and one man, dressed elaborately, formally, deliver sloganistic utterances.  Effectively, their purpose is to hector the audience with a pretty rough bombardment of statements; occasionally there are questions, but mostly there are just egoistical declarations of simple wants.  Further elaboration is denied us.  The lights snap on and off between each salvo, accompanied by a nasty noise.  It seems to be a script written in infernal tweets. 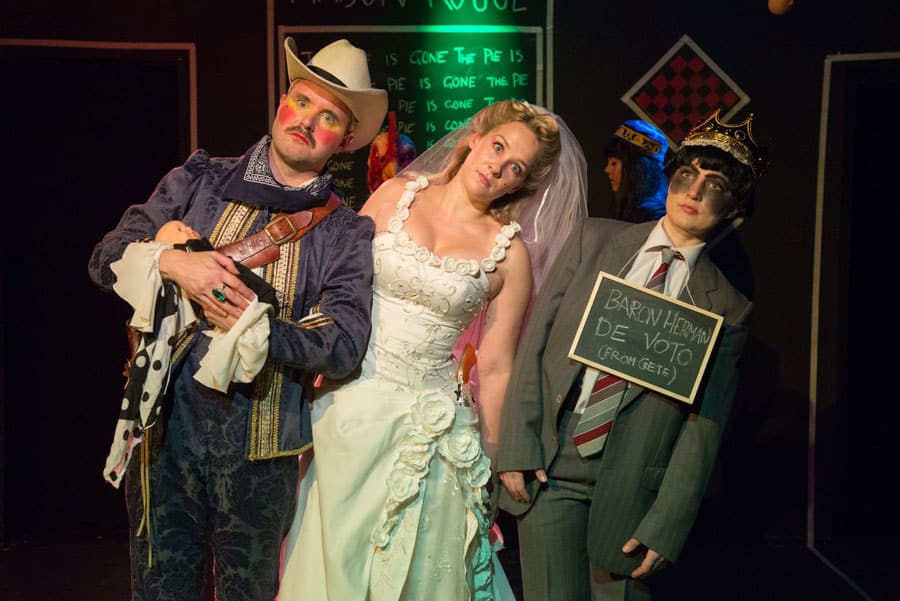 Doing the work of putting all of this across is the hard-working company.  Central to the event is Stewart Briggs as the eponymous figure ‘Rufus’, all flashy silk in a faux-pantomime outfit, and an array of crowns.  His side-kick is the extraordinary Kate Baxter, who manages to remain compelling while preserving a Buster Keaton-like perfect deadpan throughout: a label hung around her neck identifies her as ‘Baron Herman De Voto’.  And then there is a kind of chorus of three ladies.  First, in a Merlania-esque bridal ensemble, is Madelaine Nicole Jennings as ‘Suzie Sitwell’, Jessica Foden as ‘Rhoda’ and Dev Joshi as ‘Sophia’.  There is also a disembodied ‘Voice’ furnished by Mr Kennedy, who does go into some explanatory detail, but never very much.  Quite who they are all supposed to be remains somewhat obscure; possibly, with ingenuity, some knowledge of the world, and a readiness to do what the author apparently has not done, an audience might be inclined to try and work out answers to the infinite number of questions posed by this exhausting parade, this aesthetic assault created by Foreman.  Possibly not. 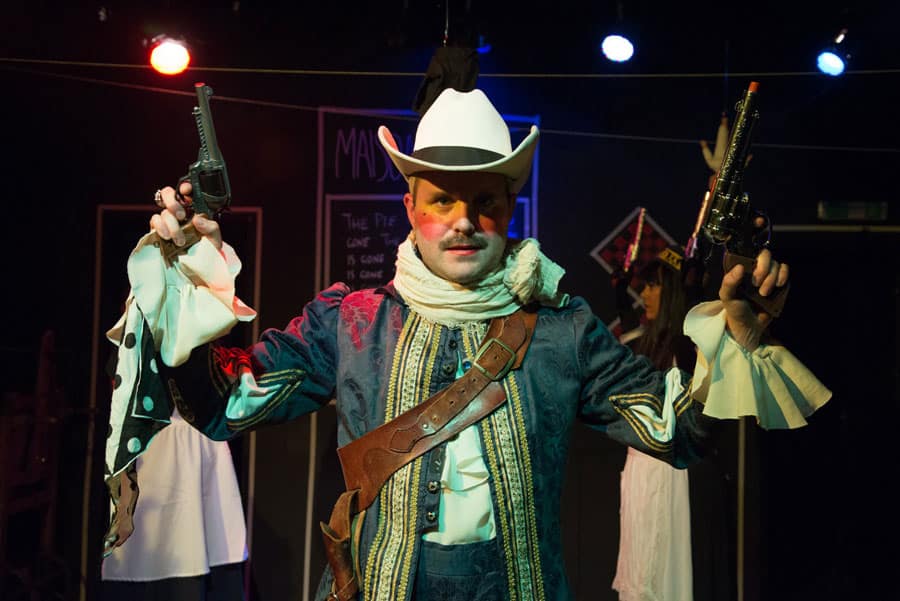 Arguably, audiences do go the theatre with a justifiable set of expectations about what they want to find in a work, in the same way that children settle down in bed to be read a story by a parent before they will condescend to go to sleep.  Well, Foreman does not speak to his audience as if they are children is all I can say to that.  Anything but.  I mean, imagine him to be the kind of parent who would read a few lines from The Communist Manifesto to his two-year old upon retiring, or deliver a few paragraphs from The Social Contract in order to induce appropriately thoughtful and socially critical dreams, and you kind of get the idea of the ‘mood’ of this piece.  Its intention, if it really has one, is perhaps to disconcert, not to reassure.  The same Foreman-like parent might also keep Disney characters out of the nursery, hanging in their stead images by Rothko or – just possibly – Lichtenstein.  There is an omnipresent maudant jokiness here, although never any actual ‘humour’. 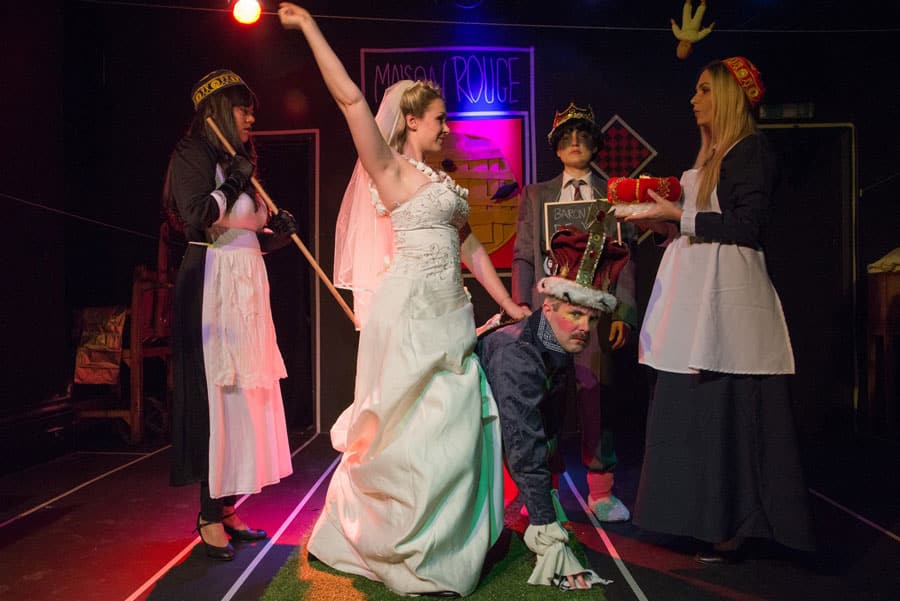 Accompanying this remarkable iteration is the music written for this production by MD (on the keys) Kieran Stallard, played also by the ever-useful reeds and flute of Nathan Harding.  Stallard lavishes humanism upon the fragments of text he is asked to set, and this does provide some flashes of warmth in an otherwise coldly challenging landscape; he adopts the tropes of popular and often rather old-fashioned American idioms, as well as a sometimes cheaply poppy approach, in a brilliantly accomplished score that makes considerable virtues of the abrupt brevity of its scope.  And, the cast do sing his music with great beauty and – that rarest of all things here – emotional intensity: their final chorale at the end reminding us of all the humanity they have apparently failed to connect with in their short and schematic existences.

So, take it for what it is, please, because it is never going to be anything else.  Bring cool drinks to sip, and light clothing, because of the oppressive heat of the space (the a-c broke down just before press night, although we are promised a replacement).  It’s a tough ride, but an interesting one, and impeccably presented.  Foreman, who usually hates productions of his stage creations, is seemingly much less hostile to Kennedy’s interpretations of his texts – this is the director’s third go at his oeuvre – and that has to be something else to admire in this year’s single offering by one of the country’s most fascinating theatre practitioners.