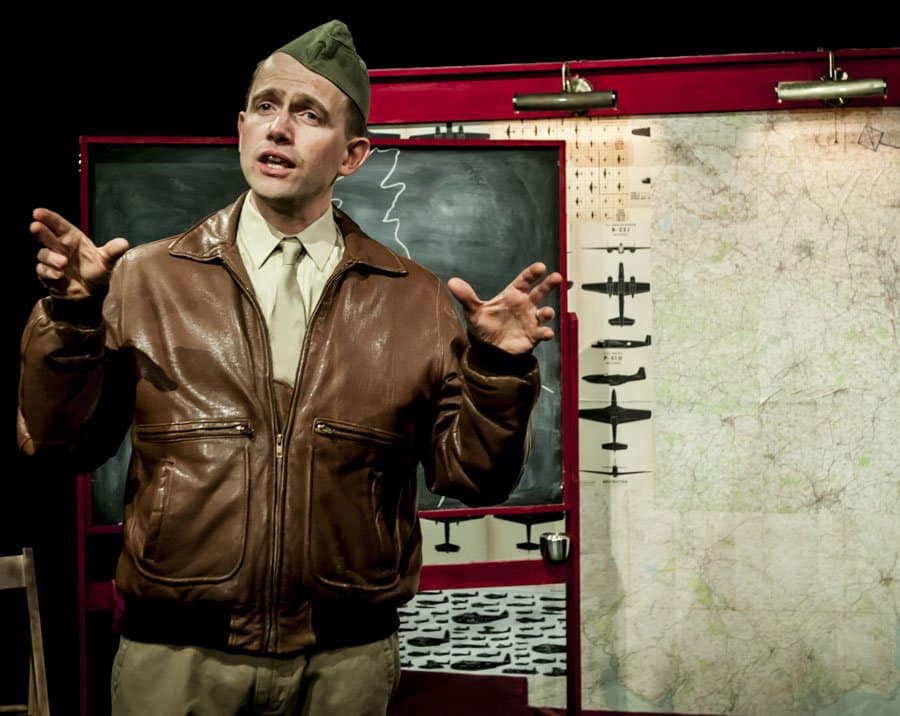 Hearing the sound of the act one siren, it’s not a huge leap of the imagination to envision the basement-based Jermyn Street theatre as a suitable shelter in the second world war bombing raids. As such, it makes for strangely fitting surroundings for Instructions for American Servicemen in Britain a fast, funny and often frenetic look at cultural differences, based on a government issued pamphlet intended to help newly arrived GI’s acclimatise to the British way of life.

It’s 1942, and the sleepy English village of Nether Middleton has been taken over by the inhabitants of the American airbase. It’s the morning after their first chaotic night in England, where they’ve fought the locals, trashed several allotments, locked up the local bobbie and driven off the vicar’s cat. The audience take on the role of the reprimanded soldiers, with plenty of opportunity to shout out suggestions and answers to questions. This also means that anyone brave enough to sit on the front show should be ready to get picked on – a lot! 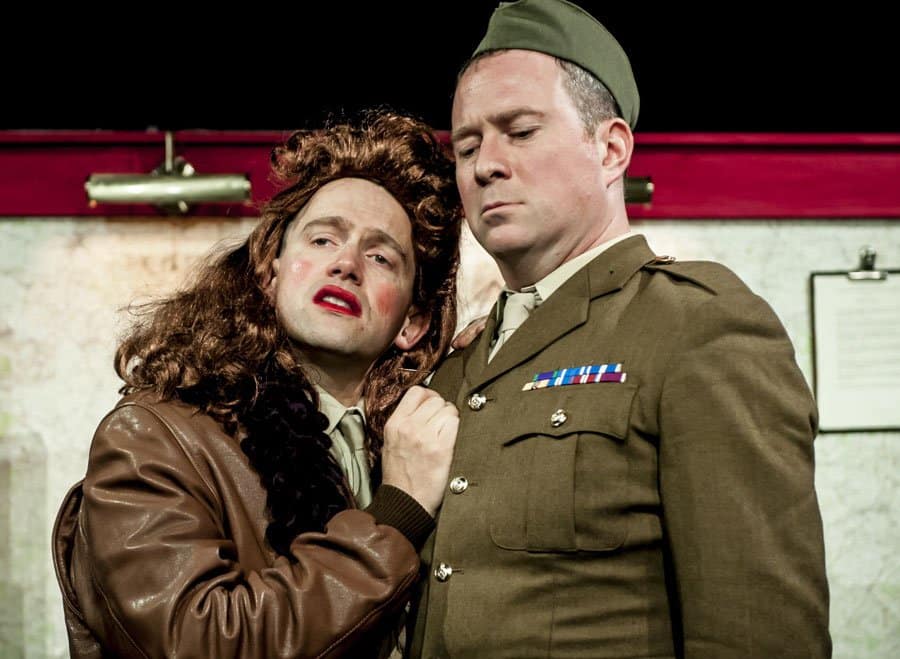 Enter local army major Randolph Gibbons (Matt Sheahan), with a message from high command. The entire camp will be put on lockdown as a punishment for the previous night, unless the Yanks apologise and take a crash course on English life. There seems little choice in the matter, although Colonel Attwood (Dan March), the loud, proud and arrogant American leader, doesn’t think it’s necessary, as his whistlestop (and hilariously inaccurate) demonstration of UK geography proves.

Attempting to keep the peace between Gibbons and Attwood is Lieutenant Eugene Schultz (James Millard), who is full of ideas (not all of them good) for getting the very different nationalities to cooperate. Together the three attempt to teach the audience all they know under a strict time limit – Winston Churchill himself is on his way to visit the troops, and wants to see that everyone is getting along. 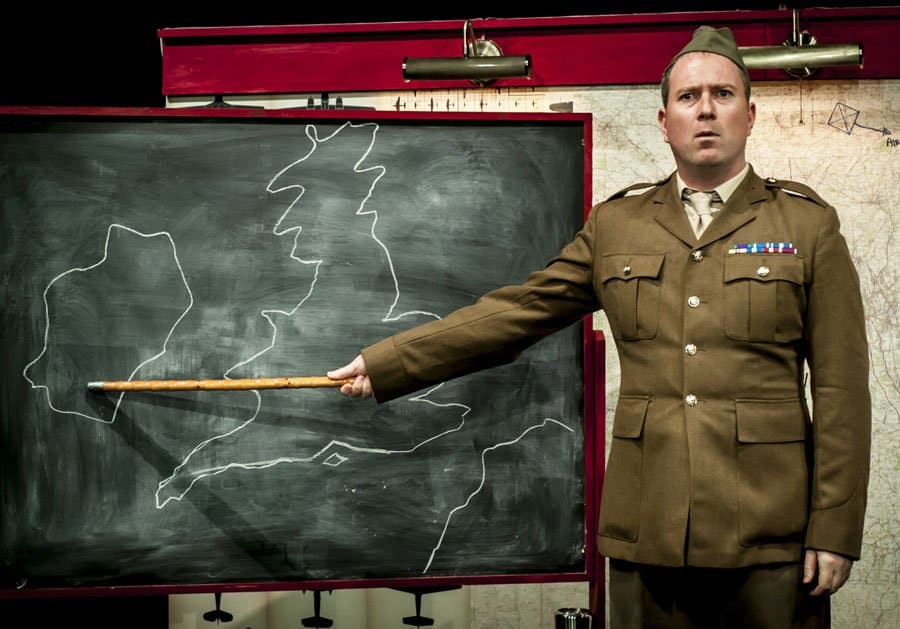 A wide and varied range of topics are covered, from the somewhat baffling monetary system to how to appropriately behave in a British pub. The show itself is incredibly silly, with a degree of slapstick and gross out humour which thankfully isn’t pushed too far. There’s a tendency to rely on stereotype that comes with the territory of comedy, but the best laughs come from the more subtle stuff; Attwood and Gibbons have some brilliant snide remarks towards each other, and Schultz’s shameless puns are made even funnier by their infectiously buoyant delivery. The set is simple, but effectively creates the world of the play with a selection of key items; maps, blueprints and a portrait of King George among others. 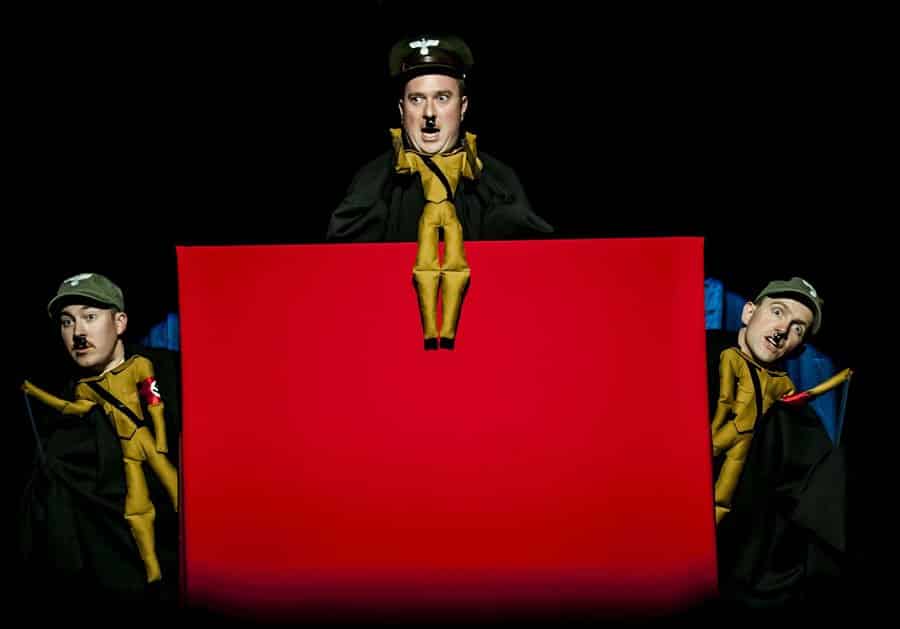 Sheahan, March and Millard, aka comedy trio The Real MacGuffins, take on the various roles with fearless aplomb, jesting with the audience and keeping energy levels sky high. Some groan-worthy quips sit alongside some very clever witticisms, as well as a few political jibes that remain surprisingly relevant today. All three performers skillfully carry off asides and interjections, and with much disparaging of both American and English sides, it never seems like an unfair attack on either. Accent work is strong on all sides, with March and Millard pulling off distinct regional drawls, and Sheahan’s clipped British tones could have come straight out of a public information film.

There are some delightfully daft interludes on offer, including an all too brief insight into Nazi Spy School, where two hapless recruits are having their own difficulties getting to grips with British eccentricities. Audience contribution is consistent throughout the play, culminating in a wonderfully transatlantic dance finale.

A fond and affectionate parody, Instructions for American Servicemen in Britain guarantees laughs and nostalgia in spades.

BOOK TICKETS FOR INSTRUCTIONS FOR AMERICAN SERVICEMEN IN BRITAIN