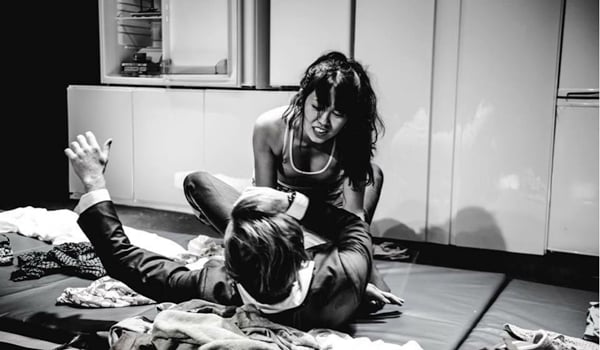 Bruises is an ambitious piece, seeking to cast a non-judgmental eye on the highly divisive topic of sex work. In the programme notes the author, Nadia Cavelle, speaks of her desire to avoid either “victimizing or empowering” the profession, concluding that if nothing else she hopes her play “[paints] a picture of plurality, complexity and ambiguity”. There is so much to admire in this play, which I believe makes a valuable contribution to a deeply sensitive dialogue. As a piece of moral philosophy, Bruises excels, unpicking questions of identity as its characters stare into the existential void. Yet the play is occasionally undermined by a lack of subtlety. Themes, metaphors and character traits are too often made explicit, making a piece that delights in the complexities of human interaction less satisfying than it should.

The play begins with the narrator, Damien (James Barnes), describing how the essential nothingness at his core lead him to become a sex worker, a profession that enables him to “dig” for human warmth. We are then introduced to ex-gymnast Banana (Kirsty Rider), whose financial troubles compel her to move in with high-flying lawyer Justin (Michael Edwards) after their one-night stand. She had previously relied on the support of former roommate Jacqueline (Eva-Jane Willis), who graduated to a luxuriant lifestyle serving the clients of her high class pimp, Mona (Lily Knight). Mona, who counts Damien among her employees, gives Jacqueline a new name – Clara – and an education, designed to enhance her appeal. Banana and Jacqueline both find purpose in their new lives, but circumstances begin to sour. The former’s budding relationship with Justin declines as both parties indulge their compulsive tendencies, whilst the latter has an identity crisis when studying Emile Zola’s Nana with lothario professor Jean-Baptiste (an underused Toby Rolt). Jacqueline is enthralled by and identifies with the life of Zola’s protagonist, and cannot face the prospect of meeting a similarly degrading end. As Banana and Jacqueline’s once close bond disintegrates, they begin to question where their lives are heading, and reflect on the paths that brought them there. 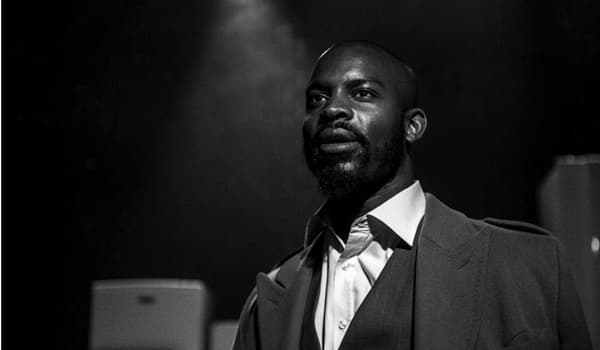 Bruises has a surreal air to it, enhanced by its set, which consisted of two gym mats, a number of differently sized fridges, and a large sheet. These items are both of practical and thematic importance. The gym mats enable Justin and Banana to fumble and argue with great physicality, whilst representing a past that Banana struggles to put behind her. Equally, the fridges are used for storing all manner of props, whilst exemplifying Justin’s cold, sterile interior – indeed, Banana explicitly compares him to an “empty, oversized American fridge”. The sheet not only acts as bedding, but characters are prone to hiding under it when they aren’t involved in the scene, and their stories implicitly inform the on-stage action.

The ambience is codified by the other-worldly Damien, who monologues about the complexities of human passion, before taking a vantage point at the side of the stage. These elements lend the play a parabolic quality which complements the best of the dialogue, encouraging us to reflect on the complex ethics of sex work, and challenge the notion that it is a rotten profession. Mona’s speech about how her wealthy, disinterested parents turned her to prostitution compellingly captures the ambiguities at play, hinting that empowerment and fear are two sides of the same coin.

Eva-Jane Willis is superb as the fragile Jacqueline, whose transformations into Clara become increasingly imperfect. Her feelings of worth, buoyed by her discovery of literature and poetry (Willis’s studious joy as she recites the opening lines of Endymion is a sight to behold) are qualified by Mona’s blunt assessment that she is merely the bread that compliments her clients’ caviar. Shortly afterwards, a triumphant monologue about the dichotomy between “fucking in the future” and “fucking in the present” transforms into a harsh scene where she tells a client she’ll take less money from him if he hits her. These disparate influences inform her second act disintegration; a tragic marvel that isn’t explained in full. Conversely, though Kirsty Rider and Michael Edwards give passionate performances as Banana and Justin, their characters are often frustrating to watch, as their actions are too frequently qualified by explanatory dialogue.

Banana’s arrested development, and her consequent inability to become emotionally intimate with Justin, becomes less compelling the more she remonstrates about the dysfunctions of her childhood. Her illiteracy, whilst an integral part of her backstory, often renders Justin an expositional figure, as he explains all manner of thematically relevant words and phrases to her. He in turn is too self-aware to be a likeable neurotic. The story of how he came to be obsessed with his dental hygiene stands out as a darkly comic moment, but it is perhaps presented with too much clarity. As Justin is clearly a flawed, but fundamentally good person, one begins to lose patience as he continues to articulate an awareness of his failings. This suggests that, unlike Jacqueline, he possesses the means of resolving his turmoil, and it is difficult to empathise with him when he is unwilling to do so.

Given that the strength of Justin’s feelings for Banana catalyses the tumultuous second act, I would have also liked the couple’s on-stage relationship to have been a little less fraught.

Their compatibility is only briefly hinted at, notably in their opening scene and in the surprisingly tender aftermath of their breakup, where Banana thanks Justin “for all the things that came from [his] heart.” Consequently, the couple’s happy ending feels rather unearned, particularly as it arrives rather suddenly, and at Jacqueline’s expense. In turn, whilst Jacqueline’s conclusion draws intriguing parallels with Zola’s Nana, the clarity of the play’s resolution undermined some of the enigmatic qualities that made her such a compelling figure.

Bruises is an impressive play, in spite of its imperfections. Cavelle is clearly a very talented writer, and when the play is at its best, it is absolutely fascinating.

Bruises runs at the Tabard Theatre until 29 August 2015