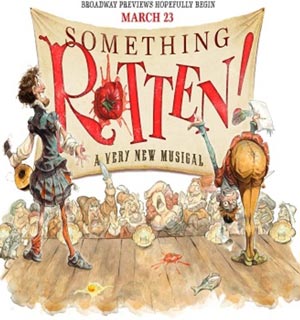 Sometimes you wonder what on Earth you did to warrant sitting through the excremental self-indulgence you have just witnessed on stage. Sometimes the anger that courses through your veins as you count the hours of your life that you will never get back is so extreme your eyeballs threaten to burst to relieve the tension. Sometimes the show features “stars” who have been recruited to ‘strut their stuff’ and lure unsuspecting, foolishly optimistic fans into a darkened theatre only to vomit on their expectations in unexpectedly vivid ways. Sometimes the writing is so bad, the music so appalling, the direction so trite, that you dream you were watching a low rent remount of Too Close To The Sun or Paradise Found instead. Sometimes a Broadway musical leaves you feeling like a vampire has fed on you since the moment the lights went out and all that remains of you is a brittle, lifeless, crumbling shell of toxic waste. These productions put the s in front of hit.

Something Rotten, the brainchild of Karey and Wayne Kirkpatrick (music and lyrics) with a book by Karey Kirkpatrick and John O’Farrell, directed by Casey Nicholaw, is now in previews at Broadway’s St James Theatre having bravely decided not to test the show on audiences out of town. It’s straight to Broadway for this monster of a show which, truth be told, is one of those shows which has to be in the “s in front of hit” category.

Wait! I got that wrong! No, no….Something Rotten is one of those shows which is indisputably NOT to be in the “s in front of hit” category. To be or not to be. Yes, yes, that’s it. It’s one of those shows where the “s” definitely comes AFTER the “hit” and describes the show, the songs, the production and the company – palpable hits all.

It’s easy to make a mistake because one cannot stop basking in the memories of the unmitigated joy which has just played out over the course of two hours and thirty minutes of sheer, unadulterated bliss. Your mind is fuddled as you try to remember the clever jokes, the quirky twists, the delightful tunes, the references to the musical canon, the quotes from Shakespeare’s writings – the veritable whirlpool of frantic, frenetic, and fabulously exuberant joy that has just bundled you up in shiny, eye-watering hilarity, seen you smile or laugh uncontrollably for so so long.

There is noting rotten here. Rather, Something Rotten is firm, juicy, fruity, perfectly cultivated, tart, sweet, and every segment, every layer that is peeled back, is full of life. It is almost an orgasm of enjoyment. The perfect blend of The Bard, Baloney and Broadway.

It is the kind of show where the less you know about it the better. The experience of having it unfold before your incredulous, but wildly satisfied, eyes is devoutly to be wished. Get thee to a Nunnery rather than listen to the songs in advance or read a detailed synopsis of the crafty narrative. Do yourself a favour – be a Something Rotten Virgin when you first see it.

In simple terms it is about the rivalry between William Shakespeare and another play writing team, the Bottom brothers, Nigel and Nick. Nick will do anything to get the upper hand on the Bard, including engaging a Soothsayer and taking money from a Jewish entrepreneur called Shylock. Nigel falls in love with Portia, but her father, Brother Jeremiah, forbids the union and seeks to destroy the Bottom brothers. What happens to these various threads provides the narrative.

But that is not what Something Rotten is really about. Its essentially an ode to the musical form, one that both satirises it’s subject and treats it with loving affection. If you know your Broadway Musicals, there will be plenty of references (musical, quotes and images) to tickle your funnybone or catch you off guard. No topic is off-bounds and there is nothing which cannot be the subject of devilish, razor sharp wit: honestly, what they do with Phantom of the Opera is reason enough to see this show. And Cats…

If you imagine Carry On Shakespeare meets Spamalot meets Kiss Me Kate meets She Loves Me meets Anything Goes, you have something of the topsy turvy flavour and sheer dirtiness of some of the jokes. (A rhyming couple with penis and genius is but one example) What is especially admirable is that the narrative works perfectly as a simple story of the adventures of the Bottom Brothers; those who know nothing about musical theatre can thoroughly enjoy that story. But for those who know about musical theatre, Something Rotten offers a cornucopia of subtle and unsubtle puns, wisecracks and double entendres.

In terms of craft, the creatives behind the book and score and lyrics are supreme masters. Not a word or note is unnecessary here. Everything is absolutely, impressively precise. Brevity is the key – less is absolutely more.

The songs are tremendous fun. There are huge ensemble numbers which stop the show, bravura solos which justify the presence of stars like Christian Borle, Brad Oscar and Brian d’Arcy James, fabulous duets/love songs, a wonderful, full throttle quartet in Act Two and endless dance sequences which are incandescently joyous. Several numbers have super earworm status: Welcome to the Renaissance; A Musical; Will Power; We See The Light; and the title number, the eleven o’clock sensation, Something Rotten. A Musical may well be the greatest song about its subject every written. I can’t remember a time when an audience has stopped a Broadway show in the middle of the first Act, but they did here – and rightly so.

The lyrics from the Kirkpatricks are clever and deft. Without music, they would be superb. With music, they are astonishing. Often they are delivered at near superhuman speed, but diction is impeccable all round and none of the lyrics are lost to the sound.

Nicholaw directs with endless inventiveness and with a sure eye for a great sight gag, an opportunity to add a stock joke and his choreography runs the full gamut from huge ensemble tap number to delicate duets and trios. Every dance number radiates classy energy; the routines are satisfying and often funny in their own right.

Scott Pask provides a marvellous set. The proscenium arch is converted into a faux Tudor frame and the sense of the 16th Century – and endless Disney cartoons – is well established. Gregg Barnes provides some wonderful, garish and eccentric costumes and Natasha Katz’ lighting is first class in every way. There is a very effective moment in front of the Thames, a bridge and the Moon in the background, which is lit in the light of love. Just beautiful.

The cast is magnificent. Brad Oscar all but walks away with the show as the Soothsayer – he is in superb comic form. Brooks Ashmanskas comes a close second in his portrayal of the hypocritical, closeted Brother Joseph – he wrenches every laugh out of those bottom jokes.

As the nerdy Bottom, John Cariani is faultless, a triumph of anxiety, self-loathing and repressed possibility. His love interest, the perky, zesty Christian Chenoweth character (no typo), Portia, played by Kate Reinders, is equally nerdy but willing to boldly go where no one has gone before with him, especially if it involves poetry or verse. Together, they are a superb pairing, both with full, expressive voices, and perfectly wicked sensibilities.

Brian d’Arcy James excels as the wayward Bottom. He has the bulk of the material and handles it all effortlessly, from small domestic scenes with his patient, loving wife (the brassy belter, Heidi Blickenstaff, who has great fun satirising Shakespeare’s tropes for women) to big voiced numbers and ardent confrontations with his hated rival, Shakespeare. He is singing fantastically well and is, in every way, memorable and ovation deserving.

As the swaggering, rock star of the 16th century, clad in skin hugging leather, Christian Borle has the time of his life. It’s a bigger than Ben Hur performance involving a lot of scenery chewing, much flexing of impressive muscles, some wonderful high tenor belting numbers, and the special joy that comes from being the bad boy. Borle is pitch-perfect in every way.

There is excellent character work from Michael James Scott, Gerry Vinchi, Marisha Wallace, Austin Lesch, Brian Shepard and Peter Bartlett. But, really, no member of the ensemble is anything other than outstanding. When they all sing together, the sound is electrifying, and the dancing they do is daring and new. Broadway will be hard pressed to find a tighter, more superbly tuned company than this one.

Phil Reno holds tight reins as Musical Director and the results are first-rate. The 18 piece orchestra is vibrant and plays with stylish panache. Everything about the score and lyrics is well served by the attention to detail Reno gives in his conducting.

As a piece of ribald, shameless and hysterical musical theatre, Something Rotten is unrivalled on Broadway at present. It is fresh, fabulous and frenetic fun. If you have ever had an experience like that described in the first paragraph above, go see Something Rotten – it will restore your faith that musical theatre can be magical in every way.

Do anything to see this original cast perform this wonderful piece of theatre.

BOOK TICKETS FOR SOMETHING ROTTEN