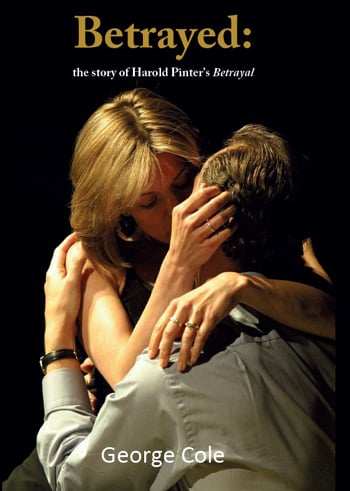 A book dedicated entirely to one of Pinter’s finest and most renowned plays is to be greeted with pleasure by Pinter admirers and academics alike. George Cole has researched the play extensively from its conception and first production at the National in 1978 to the 2012 Crucible Theatre production and the film and radio broadcasts. It’s a huge shame that the book went to print before the Pinter at the Pinter season concluded this year with Tom Hiddlestone, Charlie Cox and Zawe Ashton in Jamie Lloyd’s production of the play. It means the book feels unfinished and perhaps subsequent editions of this book will be updated to include it.

That said, Cole has gathered a wealth of material together in one volume, and his research admirably underlines the many layers of betrayal that occur in the play, and that subsequent revivals have matured the work. It has now moved from being seen as infidelity within marriage to a more complicated betrayal on many levels, something not appreciated at the first production. I particularly enjoyed the contributions from actors who have played the three roles, in particular, those playing Emma, a complicated role is often seen as problematic, but widely regarded as one of his best female characters. This is supported very much from Penelope Wilton, (the first actress), to Olivia Coleman who played her on radio. I was interested not only in Pinter’s approach, and each director but the variation in how performers approached the part. Some take exactly what is on the page, others work out a back story and previous history, even though the writer discouraged this. The rehearsal processes discussed reveal a variety of processes, which an actor can explore while reading this book, but also provides fascinating insights into the making of theatre- and the risks of West End and Broadway transfers. Betrayal is best seen in an intimate venue maybe?

There is, almost inevitably, a deal of repetition, and often Cole moves away from the play to give background information. This is, of course, often relevant, but occasionally in too much detail. For example,  Peter Hall’s battle to get the National Theatre building open and the Union strikes disrupting performances are well documented in his own diaries and perhaps need less coverage here.  The structure of each chapter is also rigid, and although the contributions of designers and stage managers is to be welcomed, I felt an analysis of each character by a range of performers would have brought even more clarity. That said, Cole has a tremendous amount of respect for his subject, and the book is very well researched.  It will appeal mainly to students of Pinter and acting and is highly readable.