Dear Evan Hansen is one of Broadway’s biggest musical theatre hits and is now playing at the Music Box Theatre.

Dear Evan Hansen is a new musical by Benj Pasek and Justin Paul with a book by Steven Levenson.

Read our review of the Broadway Cast Recording

“A gorgeous musical for anyone with a beating heart.” – The New York Times

“Dear Evan Hansen, thanks for finding us. We’ve been waiting for a musical like you.- Time Magazine

“A transformative, original and thrillingly emotional new musical that delivers a direct jolt to the heart. It sweeps you up in raw emotion like no other show on Broadway.”- Time Out NY

“That rare show that connects and enlightens all of us! As deeply universal and utterly compelling as anything you’re likely to see on stage.” – NY1

“An inspirational anthem resonating on Broadway and beyond. Dear Evan Hansen is a message of hope shining on center stage for all to see.” – NBC Nightly News 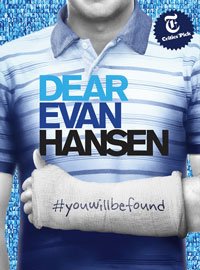