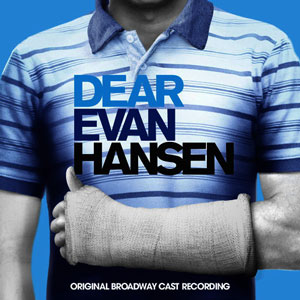 Dear Evan Hansen is a new musical by Benj Pasek and Justin Paul, whose musical Dogfight was a huge success at the Southwark Playhouse last year. Currently conquering Broadway, Dear Evan Hansen is one of those rare birds – a new original musical and it’s glorious!

“A letter that was never meant to be seen, a lie that was never meant to be told, a life he never dreamed he could have. Evan Hansen is about to get the one thing he’s always wanted: a chance to finally fit in” so goes the official explanation of what this new musical is about. It’s intoxicating to listen to. I doubt many will have to look hard to see moments from their own lives in Evan’s tale, that longing to be noticed, to be part of something, to belong.

Pasek and Paul have pulled out all the stops to create a modern pop score that is one of the catchiest I’ve heard in a while. Some of you will have heard Waving Through A Window, a song that seems to have taken on a life of its own through social media, but Dear Evan Hansen has some real emotional depth with songs like Requiem, Only Us, Words Fail, and For Forever. It’s that depth which stunned me when listening to this cast recording. Without really even knowing the ins and outs of the show’s plot, large sections of the show’s score and engaging lyrics spoke to me in a way that modern scores rarely do.

A large part of that connection comes from the central performance of Benn Platt as Evan Hansen. Talk about putting your heart and soul into a performance! Platt gives 110% of his very being to this character, and that intensity explodes out of this recording, shaking you and demanding in Lomanesque terms that “attention must be paid”. Some of you will know Platt from the Pitch Perfect films, but in Dear Evan Hansen, Platt has delivered a performance which in my view has him branded as a bona-fide Broadway star (and I’ve not seen the show yet!).

Every good musical relies on the strength of its supporting cast and there is a wealth of riches in Dear Evan Hansen. Listen to tracks like Requiem (one of the most addictive tracks on this recording) to hear  Jennifer Laura Thompson, Michael Park and Laura Dreyfus who play the Murphy family. There is real emotional guts in this number that shows a family suffering from the loss of a son and brother. These characters aren’t soppy or stock characterisations in any way. Rachel Bay Jones, Michael Park and Jennifer Laura Thompson particularly stand out on this recording as the parents in this tale. There’s a no fuss, honesty in their performances that make them incredibly believable.

Mike Faist (Connor Murphy) and Will Roland (Jared Kleinman) join with Platt in numbers like Sincerely Me and Disappear to give the show a driving heart beat whilst I found that You Will Be Found, the show’s highly emotional Act One finale is still haunting me bringing me back to the cd again and again.

Alex Lacamoire’s orchestrations for Dear Evan Hansen, continue the run of excellence seen in his work for Hamilton and In The Heights. Punchy, elegant and driving, they perfectly compliment Pasek and Paul’s words and music. Listen to numbers like You Will Be Found to hear arrangements rich with vocal harmonies, pop sensibilities and a driving (almost militaristic drum beat) and you’ll realise why Alex is such a hot property on Broadway.

Dear Evan Hansen doesn’t hide its heart and it’s that honesty that has me thinking about a trip to Broadway to see this most remarkable new show. This is a stunning cast album that comes with a whole-hearted recommendation to any lover of musical theatre.

BUY A COPY OF DEAR EVAN HANSEN FROM AMAZON.CO.UK