Kenneth Branagh is to direct a new version of Terence Rattigan’s The Browning Version which is to premiere at Riverside Theatre from 5 August 2021. 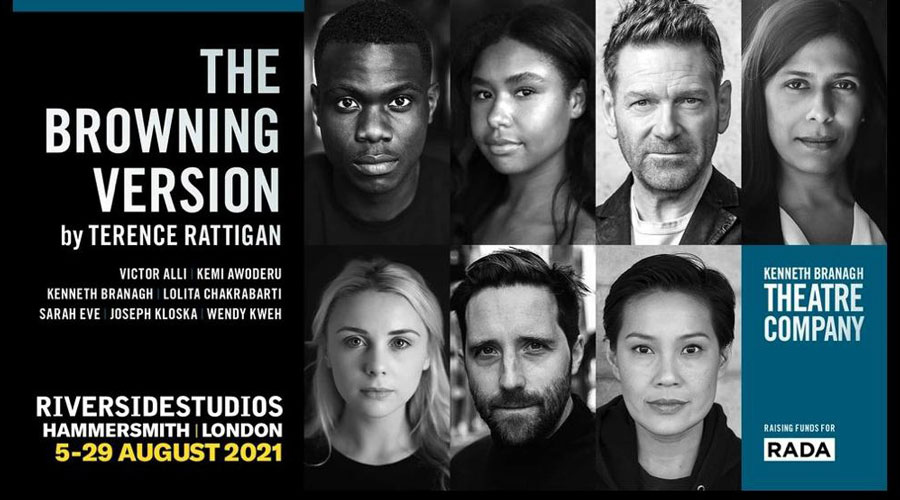 The Kenneth Branagh Theatre Company has today announced that tickets are on sale for a brand new production of Terence Rattigan’s much-loved play The Browning Version. The production will play for 3 weeks at Riverside Studios from 5 – 29 August with Branagh directing.

The production will be designed by Frankie Bradshaw, Lighting Design will be by Paul Pyant and Sound Design by Emma Laxton.

A late summer’s day at a school in England brings the end of term, and the end of intrigues, deceptions, and lies in the lives of its inhabitants.

The climax of teacher Andrew Crocker Harris’s career is also the crisis of his once intensely romantic relationship with his passionate wife Millie.

The school celebrations and the twisted ambitions of more popular pupils and teachers are intertwined with the inglorious retirement of the despised  ‘Crock’.

One quietly momentous evening in summer reveals whether their mutual futures can survive the conflict and the pain lurking just beneath the surface of British gentility, cricket, and ‘playing the game’.

Rattigan’s play is ‘English Chekhov’ for some, and for others, a titanic domestic drama that thrillingly lays bare its ties to the blood-soaked drama of Ancient Greece.

At 70 minutes, many regard it as a pocket masterpiece.

The production will donate all profits to RADA. COVID has had a devastating impact on RADA’s ability to deliver world-class training and on its finances. It urgently needs to raise £3.2million to recover and rebuild and to support its students. The  Browning Version marks the launch of Stage Critical, RADA’s fundraising campaign. For more information about Stage Critical please visit rada.ac.uk/stage-critical.

RADA Chair, Marcus Ryder said: “It is a massive privilege as Chair of RADA to be thanking Kenneth Branagh for putting on this production. A production that serves to highlight the full range and diversity of RADA’s alumni, while also launching our Stage Critical, our much-needed fundraising campaign following the extraordinarily difficult year because of Covid-19. I’m delighted that RADA is a part of this production and the rebuilding of our world-leading industry.”

BOOK TICKETS FOR THE BROWNING VERSION