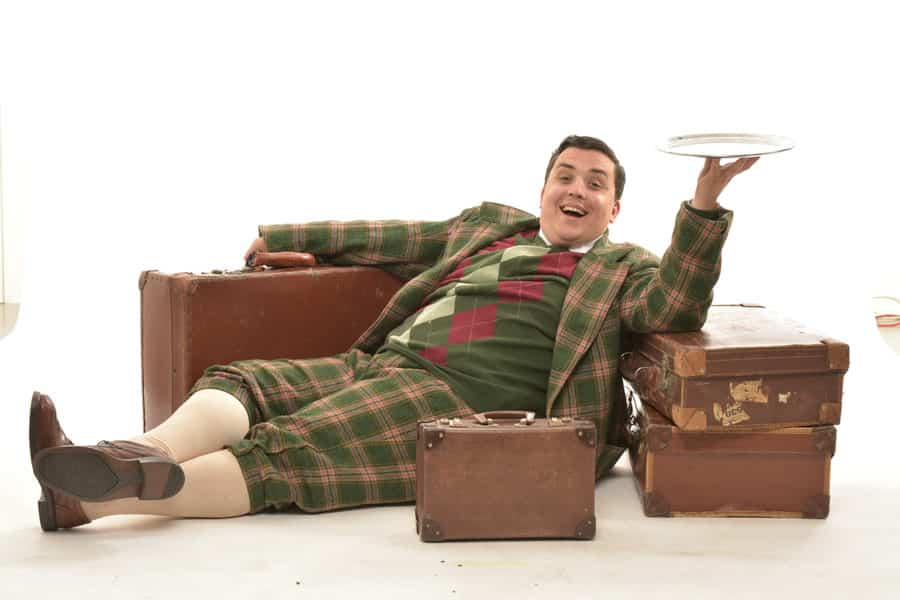 After being fired from his skiffle band, Francis Henshall is skint and hungry. He manages to secure a new job as a minder for small time gangster Roscoe Crabbe. What Francis doesn’t know, is his new guvnor is really Roscoe’s sister Rachel in disguise as her own dead brother, who has been killed by her boyfriend Stanley Stubbers.

To further complicate things, Francis nabs a second job working for that very Stanley Stubbers who is hiding from the police.  All Francis has to do to ensure his two guvnors don’t meet. What could go wrong?

Playing the central role of Francis Henshall will be David O’Reilly. David has numerous stage and TV credits to his name, with highlights including: The Catherine Tate Show Live and The Book of Mormon (both in the West End); Grease (a No. 1 UK Tour) and the popular sitcom Benidorm for ITV. 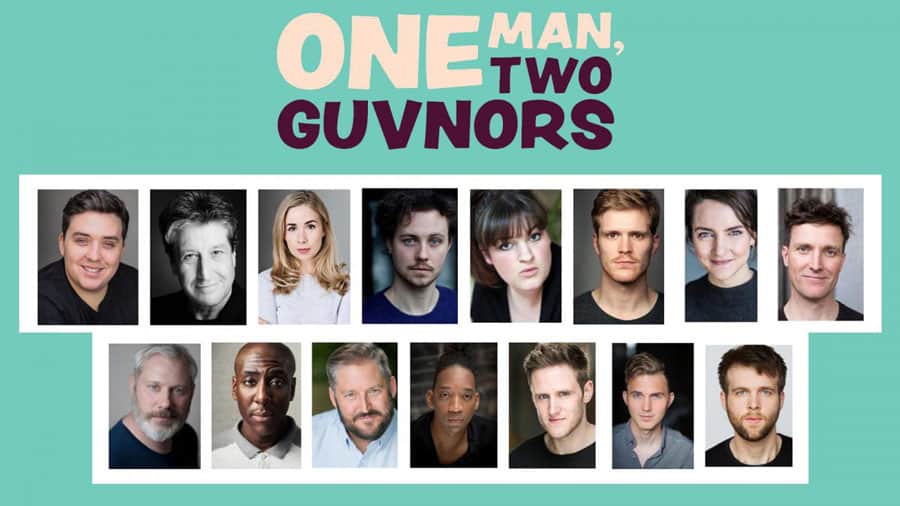 Joining David will be David Cardy, playing the role of Charlie. David played Chris, the husband of Pauline Quirke’s character, Sharon in the popular and long-running sitcom for the BBC, Birds of a Feather. David’s other TV credits include: The Bill, A Touch of Frost, Eastenders and Silent Witness. Joining them, as part of the wonderful line-up of top-class actor-musicians, will be: Samantha Hull as Pauline (A Christmas Carol for the RSC, Half a Sixpence at the Noel Coward Theatre and a UK tour of Jersey Boys); George Kemp as Stanley (The Trial of Christine Keeler for the BBC and Rope for Queen’s Theatre Hornchurch);Alice Frankham as Rachel (Sleeping Beauty for Theatre Royal Stratford East and Robin Hood for Derby LIVE and Little Wolf Entertainment); TJ Holmes as Alfie (The Hired Man for Queen’s Theatre Hornchurch, Mother Courage for Leeds Playhouse and Two Gentleman of Verona for Shakespeare’s Globe and Liverpool Everyman); Ivan Stott as  Harry (The Jungle Book and Goldilocks and the Three Bears for Derby Theatre and composer for numerous Derby Theatre productions);  Duane Hannibal as Lloyd (Of Mice and Menand The Wind in the Willows for Birmingham Rep and A Taste of Honey for New Vic, Stoke); Jack Brett as Alan (Peter in Peter Pan for Derby Theatre, a UK tour of Romeo and Juliet for China Plate and Underneath a Magical Moon for York Theatre Royal); Craig Armstrong as Gareth (director of Fat Friends the Musical, actor in Billy Elliot The Musical in the West End and Whistle Down the Wind for Bill Kenwright) and Rosie Strobel as Dolly (Grimms’ Fairytales for Guildford Shakespeare Company).

One Man, Two Guvnors will feature a live skiffle band which includes: Oraine Johnson (The Jungle Book for Derby Theatre andOne Flew Over the Cuckoo’s Nest for Torch Theatre); Dominic Gee Burch (UK and International Tour of Footloose); Jay Osborne(Cilla the Musical and Dreamboats and Petticoats for Bill Kenwright) and Tomas Wolstenholme (Dick Whittington Rock ‘n’ Roll Pantomime for Stafford Gatehouse and Cinderella for Bolton Octagon). The skiffle band will treat the audience to some pre-show music before each performance.

One Man, Two Guvnors is a side-splitting mix of physical comedy, farce and live music and has remained a huge hit with audiences and the press alike since the National Theatre’s production opened to rave reviews in 2011. The play continued to be a runaway success when it later toured the UK, played in the West End and on Broadway and later played Hong Kong, Australia and New Zealand, plus further UK tours.