Aladdin made its Broadway debut at the New Amsterdam Theatre on March 20, 2014, the new musical adaptation of the Academy Award-winning animated film, has become one of Broadway’s most successful productions. 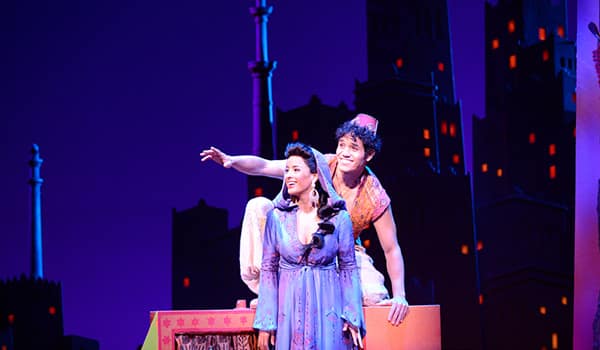 Aladdin is the story of a street urchin who uses the help of a magic genie to win the heart of Princess Jasmine. Aladdin and Jasmine fall in love and learn to be true to themselves as they fight off an evil, power-hungry enemy. In an exotic, faraway land, this timeless story reveals how one man’s life is about to change with the lucky rub of an ancient lamp. Aladdin’s journey sweeps audiences into an exotic world of daring adventure, classic comedy and timeless romance.

Originally released as an animated film by Disney in 1992, Aladdin was a critical and box office smash, grossing over $500million worldwide and was the highest grossing film of the year. The film won the Oscar for Best Original Score. This new production features a full score, including five beloved songs from the original film and more written just for the stage.

“The prospect of “Aladdin,” promising another weary night in the presence of a spunky youngster and wisecracking animals, didn’t exactly set my heart racing. But this latest musical adapted from one of Disney’s popular movies, which opened on Thursday night at the New Amsterdam Theater, defied my dour expectations. As directed and choreographed (and choreographed, and choreographed) by Casey Nicholaw, and adapted by the book writer Chad Beguelin, “Aladdin” has an infectious and only mildly syrupy spirit. Not to mention enough baubles, bangles and beading to keep a whole season of “RuPaul’s Drag Race” contestants in runway attire.”
Charles Isherwood – New York Times

Tuesday, Wednesday and Thursday at 7pm
Friday and Saturday at 8pm
Saturday at 2pm
Sunday at 1pm and 6.30pm 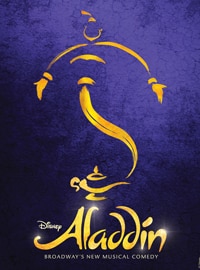