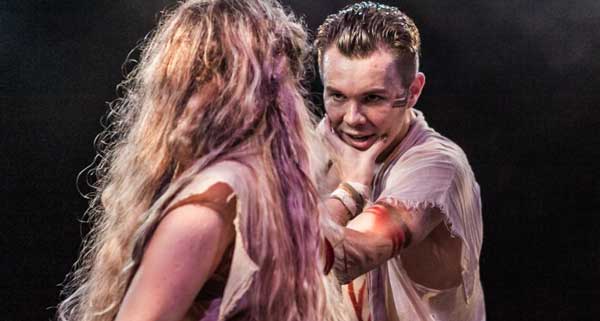 Imagine the scene. A rich, verdant, abundant forest, green and perhaps starting, just, to turn golden, stuffed with flowers that bring bursts of colour and fragrance to every step along the worn path; vines, trees lush with fruit, pinecones and leaves; a hill, where shadows flicker and dance in the corner of your eye; a lake, shimmering and glistening in the moonlight; and a circle of stones, a remnant of a bygone pagan life. It’s that last summer before the start of the First World War and there is an innocence, a sense of propriety, of tradition, of formality, of long skirts and three piece suits permeating every corner of the forest where the moonlight darts and transforms.

It is a place throbbing with possibility – sensual, lustrous, ripe and with just a touch of uncertain mystery. A place where magic could so easily happen.

Got the image in your mind?

Good, because that is the setting for Howard Goodall and Charles Hart’s magnificent musical adaptation of Shakespeare’s A Midsummer Night’s Dream, now being revived at the Union Theatre with direction by Paul Clarkson, musical direction by David Griffiths, choreography by Helen Rymer and set and costume design by Kingsley Hall.

It’s especially good to have that image in your mind because nothing about this production gives you any sense that such a place is the right setting for this really quite beautiful musical. Which is a desperate shame.

Hall has shown great design judgment in previous productions, but not here. A palette of brown and beige is disturbingly inadequate for the kind of rapturous natural beauty that would illuminate and properly frame the narrative and the score. The great mystery is why the part of the playing space in full view of every seat in the house is kept for the small orchestra; even if that was desirable, there would be no reason why there could not be a forest in front of the orchestra and a sense of the lake, the bed of leaves and twigs and flowers where the young human lovers eventually find themselves asleep together.

Further, and extraordinarily awkwardly, the space is arranged so that entrances cannot be made everywhere through the audience. This is especially odd in a space as flexible as the Union and it means that there is a great deal of silly, pointless running behind the backs of seats. The lost opportunity of having the mystical folk constantly appearing through the audience is profound.

It’s rare that the design for a musical and the concept of playing it works so very hard against the fabric and musicality of the piece – but, alas, that is the case here.

What is most extraordinary is that, despite this outright silliness, the power of the work itself – both book and score – is almost enough to make directorial and design decisions irrelevant.

Hart has done a wonderful job of adapting the Bard’s core stories. The sense of rural estate life is palpable, as is the hierarchy, the sense of moral outrage of the father whose daughter has apparently eloped and the raucousness of the lads who here substitute for the Mechanicals. And his lyrics are deft, pulse with life and interest and never flag, never descend into trite irritation. Equally, there is passion and sensuality in the passages involving the faerie folk and a real sense of fun in the more comic material.

And he inspires Goodall, whose musical tunes, harmonies, counter-points, polyphonies and flourishes are absolutely exquisite. The music is full of passion, joy and expression, the second Act in particular. There are jaunty tunes, reflective songs, rousing choruses, intriguing ballads and patter songs. And, of course, love songs, but not mushy, stupid ones, but haunting and evocative ones which send the narrative hurtling along in interesting and absorbing ways.

Griffiths ensures the cast has good orchestral support, but there is no denying that this score calls out for a full string section and a full woodwind section. What aural bliss there would then be here, in this rich, complex Goodall music.

This piece was commissioned by the National Youth Music Theatre and, accordingly, it is possible for very young people to play all of the roles, as happens in this production. But it is quite clear that with a cast of all ages, and a budget and a set that complements the work, this could be a truly astounding musical. It is a mystery why the National did not exploit it rather than pour millions into the waste of time that was The Light Princess. If this got the care and lavish attention Matilda did, it would be a world-wide hit.

The cast here are mostly very talented and mostly fresh out of one drama school or another. The main exception (about being just out of drama school) is Michael Chance who is quite lovely as the slightly fussy but well meaning Vicar version of Peter Quince.

There is excellent work from Alex Green, who is a lusty, sweaty sprite and a dim witted Bob; from David Breed, an endearing turn as the happy Grubb, he lights up every moment he participates in; from Christina Harris as the enigmatic and tricksy fairie Aphra; and from Michael Burgen as Bottom/Cheek, terrific in every way, great voice, great spirit, great timing.

There is too much shouting, pouting, over-acting and a complete failure to engage with the comic timing and delivery necessary to make the four lovers work – but that seems more about Clarkson’s direction than the quartet’s skills. Mostly anyway. Joshua Tonks is all stiff shouty git as David; Alastair Hill is frenetic nerd in the pantomime sense, complete with apple, as Alexander; Holly Julier is cute and her silly speech impediment almost works, but she is not beguiling enough as Charlotte; and Rachel Flynn is out of her depth, vocally and dramatically, as Jennifer, the object of both Alexander’s and David’s affections.

Apart from Flynn, it is clear all could play their roles exceptionally well, but the choices here are all crass and obvious, when real rewards would come from more subtle turns, drenched in simple warmth and love.

The rest of the ensemble are all capable and there is magnificent vocal work in the larger ensemble numbers. Rymer’s choreography is mostly effective, sometimes outstanding, and the entire company executes it with style and skill.

There is so much to like here; it just needs more sensible direction. The score and book is first class and there are performances that will linger in the memory for a long time. As flawed as this production is, it demonstrates the strength of the Goodall/Hart collaboration.

For more information on The Dreaming visit the Union Theatre website