As Jersey Boys approaches it’s 8th anniversary we got a chance to chat to Matt Corner who is playing Frankie Valli in the show that has become a massive hit around the world.

Tell us a bit about your background?
I grew up in Darlngton. As a youngster, I went to Stagecoach as a confidence building exercise and realised that I wanted to be an actor. I loved watching videos of Only Fools And Horses with David Jason, who I greatly admire, he’s just a genius as a comic actor. He was a huge inspiration and the reason I got into acting.

I spent most of my time day dreaming at school. I’d be reading the text of Midsummer Night’s Dream stuck inside my maths text book. The teachers at school laughed – the careers adviser asked me what I really wanted to do for a living!

Getting into musicals and singing came about by accident through an amateur production of Les Miserables. My Aunty saw it advertised in the paper, and knowing I was interested in theatre, cut it out and sent it to my mum who convinced me to go along. I got cold feet and last minute and didn’t want to do it, but I ended up going along.

I was 14 with no experience. They gave me the part of Marius, and from there I got heavily involved in amateur theatre.

How did you get from there to here?
Some of the people in the amateur group were heading off to drama school. Being naïve I had no idea. They explained to me that it was like university but you train as an actor, then hopefully get an agent and go into the business. I was amazed that you could make a living out of acting.

I auditioned and got accepted by Arts Ed who really nurtured me. 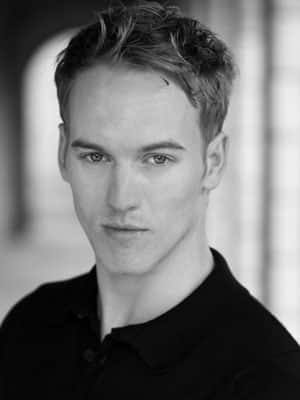 Looking back what sort of advice would you give to someone who wanted to act for a living?
People ask me what advise would you give – just give it 100% – give it all of your passion and dedication.

I’m from a working class background and I certainly couldn’t have got to here without the financial support offered. It’s really important for that to be continued to give people a chance.

So tell us about your first job?
My first job was in the Les Miserables movie. It was a bit of a baptism by fire. Being on set with major stars like Hugh Jackman, Russell Crowe and Eddie Redmayne was amazing. I was still at drama school, I’d done two weeks rehearsal, then had a four week break until shooting started, and in that break I went back to college.

I then did 6 weeks on set, then went back to my part time job working in a gym. It was a case of extremes but honestly that’s what it was like.

Since then, I’ve been very fortunate to have been continually busy. I did a small tour of High Society as the understudy for the role of Macauley Conor, then understudied Galileo in We Will Rock You.

You’re quite fair and probably not how most people see Frankie Valli as looking?

When I originaly auditioned I thought I’m blond and have blue eyes, there’s no way I’ll get the role, but the job that make-up and wigs have done is really amazing.

Where there any challenges in getting the Frankie Valli sound right?
I spent a lot of time listening to the original recordings. It’s not about a straight out impersonation, it’s about getting the essence of the man and his vocal style.

Making the character real, is all about telling the story and finding the truth in the character. The director treats the show as a play with music. You see the story of Frankie Valli from the perspective of each of the members of the group. For me the show has lasted because the story is brilliant, and the audience find it very moving. You get the songs but there’s this great story to back it up.

So how are your preparations going for opening here in the West End?
It’s been odd rehearsing here at the Piccadilly Theatre and then going back for the final week of the tour in Edinburgh and playing to a theatre three times the size. It’s been pretty surreal.

I have to pinch myself, standing here now in Piccadilly, it feels like I’ve properly arrived.