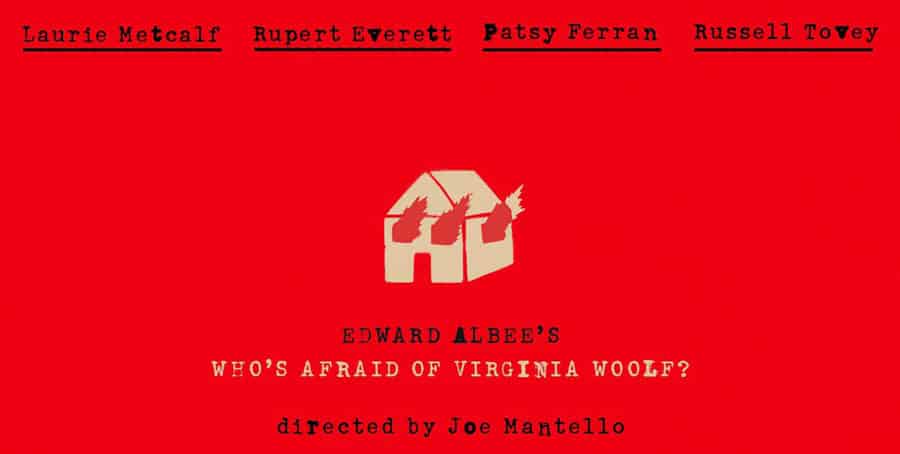 The casualty list of shows that will not be returning when Broadway re-opens from its Coronavirus shutdown is growing with the announcement that the revival of Edward Albee’s Who’s Afraid Of Virginia Woolf has now closed.

Directed by Joe Mantello was to star Laurie Metcalf as Martha, Rupert Everett as George, Patsy Ferran as Honey and Russell Tovey as Nick.

Eddie Izzard was to have played George, but it was announced that Everett would replace him in September 2019.

The revival was schedule to open at the Booth Theatre on 9 April but ended up playing only 9 previews and closing on 17 March 2020. Scheduling conflicts caused by the shutdown made it impossible for the show to return.

This is the second Broadway show that will not be returning as it joins Hangmen that announced it is also not returning. Both productions featured a majority British cast.

Albee’s classic play was first staged in 1962 winning both the 1963 Best Play Tony Award and has since been revived several times on Broadway. In 1976 with Colleen Dewhurst and Ben Gazzara. in 2005 with Kathleen Turner and Bill Irwin, and in 2012 with Amy Morton and Tracy Letts.

The 2012 revival won the 2013 Tony Award, Best Revival of a Play, Best Performance by an Actor in a Leading Role in a Play (Letts) and Best Direction of a Play (MacKinnon).