The Play That Goes Wrong West End will be going wronger longer as the hit comedy announces it will extend performances into April 2023. 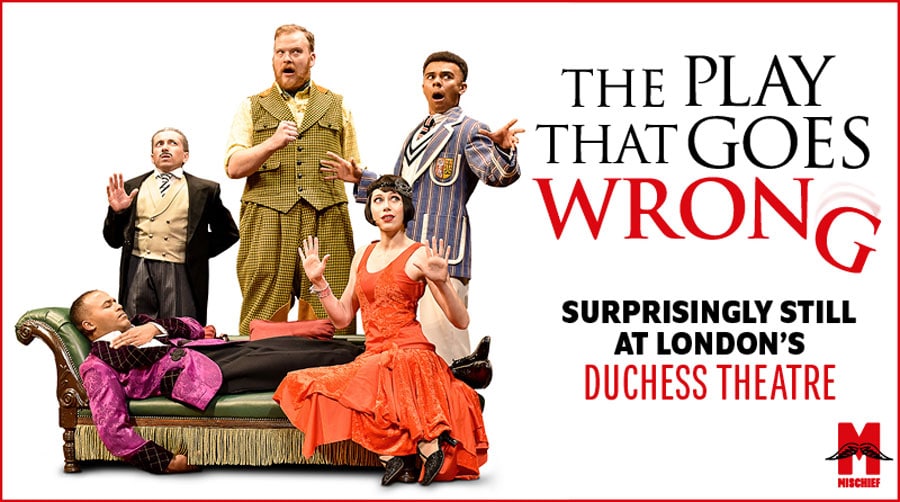 The Olivier Award-winning comedy The Play That Goes Wrong West End is now still trying to get it right in its eight-year at the Duchess Theatre where it now holds the record for the longest-running comedy in the West End.

The Play That Goes Wrong was the first production from Mischief Theatre. It has come a long way since it opened to four paying customers in a London Off West End theatre.

This production has now disgraced itself in front of an audience of over two million patrons in over 30 million countries who come to see if they’ve got it right yet. No luck so far!

Some of the cast gave up long ago, but others are up for the challenge where many have failed. They just can’t help themselves, poor souls.

The Play That Goes Wrong is co-written by Mischief company members Henry Lewis, Jonathan Sayer and Henry Shields and is directed by Mark Bell, with set designs by Nigel Hook, costumes by Roberto Surace, lighting by Ric Mountjoy, original music by Rob Falconer, sound design by Andy Johnson and the associate director is Sean Turner. The Play That Goes Wrong is produced in the West End by Kenny Wax Ltd and Stage Presence Ltd.

Never the company to stick with something until they get it right, we’ve been astonished that Mischief Theatre will take The Play That Goes Wrong will tour the UK (again) starting at the Theatre Royal Bath in April. They also presented Magic Goes Wrong created with Penn and Teller, the best in the business (that didn’t help either!) and the BBC (trusting souls) have also given them a chance to do Series 2 of The Goes Wrong Show currently hidden away om iPlayer.

Blame for allowing this farce to continue can be blamed on Mischief Theatres original members, its creative group and its directors Henry Lewis and Jonathan Sayer.

Please note Mischief Theatre have told us that children must be at least 8 year of age and children under 15 must be accompanied by an adult over 18 years of age. They are constantly mocked by young children and ask that you explain how difficult it is to present The Play That Goes Wrong without stuffing it up completely. Please!