Showstopper Of The Day was launched in response to home isolation during the COVID-19 period. 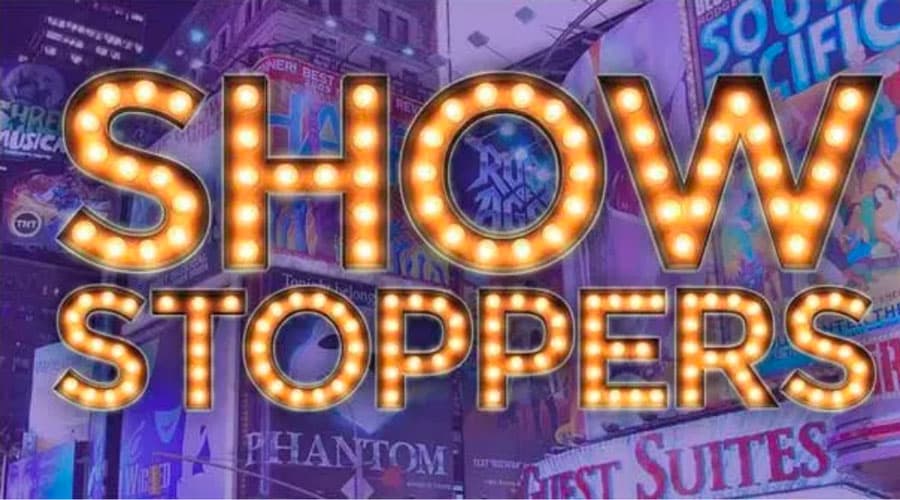 We wanted to entertain and try to put smiles on peoples faces with great numbers that well and truly stop the show. These are the numbers that we selected and we will keep updating this page each day as we select a new number.

RUN, FREEDOM, RUN from Urinetown
We were reminded this morning what a great show Urinetown is. So enjoy this great clip of the Original Broadway cast performing at the 56th Tony Awards.

WHO’S THAT WOMAN! from Follies (National Theatre London 2017)
A number that never ceases to bring down the house as Weissman’s Follies Showgirls relive a number at a reunion haunted by the ghosts of their former selves. I believe the choreography by Bill Deamer became bigger when the show returned By Popular Demand a year later. The full original Broadway orchestration by Jonathan Tunick and James Goldman’s original book combined with Stephen Sondheim’s iconic score and Dominic Cooke’s direction with the National’s craftsmen and technicians creating an incredible crumbling theatre was sensational.

HAPPY BIRTHDAY MEL BROOKS – KENNEDY CENTRE HONOURS
What better way to celebrate the masters birthday than with the performance from the Kennedy Centre Honours Gala where he was honoured. So many more musicals in the man if this is any indication.

A TRIBUTE TO IRVING BERLIN featuring Peter Allen and Bernadette Peters
If you want to present a tribute to one of the most prolific songwriters grab two incredible performers along with a hundred other singers and dancers and then present the resulting medley at the Academy Awards and voila!

The Boy From Nowhere – Matador (1990)
Happy birthday to Tom Jones who celebrates his 80th birthday today. We thought we’d celebrate his incredible career and talent by including this song from the 1991 musical Matador by Mike Leander and Eddie Seago, with a book by Peter Jukes. Loosely based on Manuel Benitez (El Cordobes), Matador told the story of the rise and fall of a fictional matador. Opening at the Queen’s Theatre, London in 1991 starring John Barrowman, Stephanie Powers and Caroline O’Connor, but its run was short due to the effects of the first Gulf War.

Make Them Hear You – Ragtime
At a time when there is such unrest across the globe due to inequality, made all the worse by some people in power who seem to relish the chaos and anguish they cause, it was time to wheel out the one and only Brian Stokes Mitchell to sing this plea from Ahrens and Flaherty’s epic musical Ragtime.
“Let Freedom Ring!,” part of the free daily performance series on the Kennedy Center’s Millennium Stage, features Tony®, Emmy®, and Grammy®–winning artist Audra McDonald and Two- time Tony®-winning artist Brian Stokes Mitchell and the Let Freedom Ring Choir led by Music Director Rev. Nolan Williams Jr. In collaboration with Georgetown University. January 21, 2019.
Listen to the words, we hope that wounds can be healed, lessons learned, understanding gained and equality made the norm permanently.

Tell Me It’s Not True  – Blood Brothers
We had a request for Blood Brothers so we found a clip of the incomparable Barbara Dickson singing the show’s finale. Barbara was the very first Mrs J in the musical version of the show (Previously, the show was a straight play which had toured schools). There have been some amazing interpretations from the likes of Stephanie Lawrence, Petula Clarke, Helen Reddy, Mel C and Lyn Paul. If anyone can find me a clip of Miss Jones please let me know. Anyway, from the Third Longest Running Musical In West End History one of producer Bill Kenwright’s crowning triumphs Barbara Dickson singing Tell Me It’s Not True.

Just No Time at All – Pippin
Bertha’s showstopper from Pippin by Stephen Schwartz, Roger O Hirson and Bob Fosse. Here Andrea Martin stops the show in the 2013 Broadway revival. Incredible!

Glitter and Be Gay from Candide

Based on the 1759 Novella of the same name by Voltaire, Candide was composed by Leonard Bernstein and was first performed in 1956 with a libretto by Lillian Hellman and later by Hugh Wheeler. Here Kristin Chenoweth as Cunegonde performs Glitter and Be Gay with a special appearance by Patti LuPone in the 2004 Concert with the New York Philharmonic

Why Can’t You Behave – Kiss Me Kate

In this clip from the 2014 BBC Proms Louise Dearman and Tony Yazbeck perform this standard with music and lyrics by Cole Porter and book by ‎Bella and Samuel Spewack. They are backed by the John Wilson Orchestra.

Hard To Be The Bard – Something Rotten
As today is World Shakespeare Day we thought that Willy needed to be included in today’s Showstopper but we were confronted with two points of view – so today there are two shows from Something Rotten by John O’Farrell, Karey Kirkpatrick and Wayne Kirkpatrick. Hard To Be The Bard is performed by Christian Borle.

If He Walked Into My Life Today from Mame
A ballad today performed by the incredible Marin Mazzie from Jerry Herman’s Mame.

Tommy Tune performs this showstopper of all showstoppers from Dorothy Fields and Cy Coleman’s musical Seesaw which featured a book by Director/Choreographer Michael Bennett. Tommy won the Tony Award for this performance and would go on to direct and choreograph iconic musicals including Nine and Grand Hotel. Enjoy!

Six Wives – SIX The Musical
Lucy Moss and Toby Marlow didn’t sit down to seriously write a musical and I think that’s part of why SIX has been such a phenomenal success, it’s not written to formula. It’s not padded or extended just to make up time, it’s economical, clever, funny and if you are like me I found myself leaving the theatre moved and impressed. I was crushed for them having their opening night on Broadway cancelled. The writers have a knack for tunes that have that ‘earworm’ quality to an annoying degree. What I really loved was the insane audience reaction from audiences of all ages. Enjoy Six!

Defying Gravity – Wicked
Right to take a slight detour away from classic Broadway showstoppers, we thought what better way to blast away the cobwebs and give you a slightly new take on Showstoppers. So for the next day or two, we take a look at new interpretations of some great numbers starting with the Act One closer from Wicked performed by acclaimed West End (and Broadway ) Elphaba – Kerry Ellis and the international rock supergroup Queen. Mixing that infamous guitar sound of Queen with the dynamic of this Showstopper made this one we couldn’t omit. We hope you enjoy.

Rhythm Of Life – Sweet Charity
From the film of Sweet Charity, this version featuring the one and only Sammy Davis Jr is a joyous celebration and couldn’t be resisted today.

There’s Gotta Be Something Better Than This – Sweet Charity
A high octane treat with creative by Cy Coleman, Dorothy Fields and Bobe Fosse performed by Shirley Maclaine, Paula Kelly and Chita Rivera. Another one that has lyrics applicable to what’s going on out there.  I don’t know if I could maintain social distancing doing that routine outside in the street.

We Need A  Little Christmas – Mame
Yes, we know it’s Easter but it was noted we needed some Christmas after all the woes of the world of late. Mame purists I’m sorry but this was the only decent version of the song in show format, we may, however, run Angela Lansbury again at Christmas. It’s the sentiment of this brilliant Jerry Herman song that resonates.

Ya Got Trouble from The Music Man

We included the footage of the one and only Robert Preston in the movie adaptation of Meredith Wilson’s The Music Wilson. Enjoy!

Sit Down You’re Rocking The Boat – Guys and Dolls
In 1982, Richard Eyre’s multi-award-winning Olivier Theatre revival of “Guys and Dolls” became the biggest hit of the National Theatre’s first 20 years. In this excerpt, Clive Rowe, who played Nicely-Nicely when Eyre revived his production at the National Theatre in 1996, leads an ensemble in “Sit Down, You’re Rocking the Boat.”

Anything Goes – Anything Goes
The 1934 musical with music and lyrics by Cole Porter. The original book was a collaborative effort by Guy Bolton and P. G. Wodehouse, heavily revised by the team of Howard Lindsay and Russel Crouse. Here Sutton Foster and the 2011 Revival cast of the show.

Anthem – Chess
Anthony Warlow performs Anthem sung by the Russian chess champion Anatoly as the Act One closer of Chess the musical by Tim Rice, Benny Andersson and Bjorn Ulvaeus. A knockout score if ever there was one.

Where You Are – Kiss Of the Spiderwoman
Take Kander and Ebb, Chita Rivera, Anthony Crivello and Brent Carver, the novel of the same name and a rather grim tale of political persecution becomes pure magic.

Tap Your Troubles Away – Mack and Mabel
Possibly one of Jerry Herman’s best score, Anna Jane Casey and the John Wilson Orchestra with possibly the anthem of this period. Get your tap shoes out.

The Lambeth Walk – Me and My Girl
Robert Lindsay and the Broadway cast perform The Lambeth Walk first stage in 1937 and revised by Stephen Fry in the eighties. It’s infectious but in a good way.

A Musical – Something Rotten
This hilarious take on Shakespeare and his erst-while contemporaries Nick and Nigel Bottom bought the house-down half way through act one with this number. The ultimate homage the musicals if ever there was one. Lead by Brian D’Arcy James and Brad Oscar and the cast of Something Rotten.

You Can’t Stop The Beat – Hairspray
With a big revival starring Michael Ball who won the Olivier for this role, we couldn’t resist putting this one on the list. We’re sure by the end of this number Marc Shaiman and Scott Wittman must be wearing sadistic grins as the cast work through once of the most energetic closing numbers ever.

The Brotherhood Of Man – How To Succeed In Business Without Really Trying
More than a little sexist by today’s standards, How To Succeed is still a lot of fun and there are some great numbers and this is the pinnacle. Enjoy Daniel Radcliffe, John Laroquette and the Broadway revival cast.

We’ll Take A Glass Together – Grand Hotel
Michael Jeter (who won the Tony for this performance) and Brent Barrett combined with Tommy Tune’s incredible choreography and direction make this a number that can be watched again and again.

Visit our Stuck at Home Page