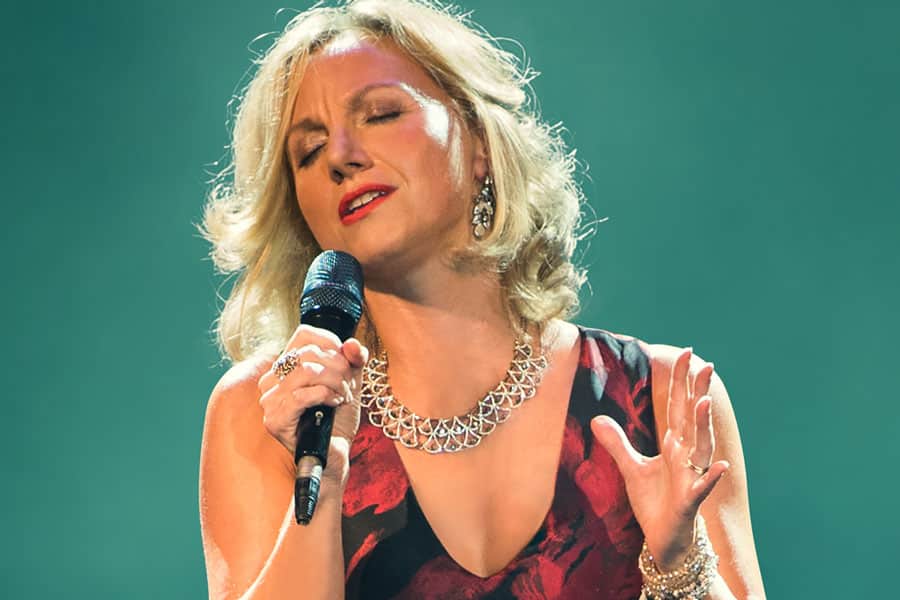 The evening begins with one of the pieces synonymous with Streisand, Don’t Rain on My Parade, which segues into You’ve Got a Friend. The pattern of the show is established as it dances between songs from different styles and periods. MD, Joseph Atkins is on the piano and is also responsible for the arrangements. Most often they begin in the style of Streisand and then flip into a shape of their own, stamping the classics with a touch of originality and freshness.

Liza Pulman is a force of nature and has a background and training in operatic singing. It’s wonderful to hear her sultry and smooth vocal tones meld into a rich and powerful climax. There is often the echo of the timbre of Streisand’s voice but Liza states from the start that the intention is to pay homage to the original without attempting imitation. The result is a sound of Streisand with a large delicious slice of Liza.

In addition to flawless and beautifully controlled singing Pulman excels in adding a delivery of emotional connection rarely seen in concert performances. In her rendition of You don’t Bring Me Flowers I got a clearer understanding of the lyrics than ever before.

However Liza is not the only huge talent on stage and she regularly acknowledges the boys in the band. As an ensemble the sound is tight and fat when required and yet shows sparse and lyrical too. The arrangements are intelligent and show a depth of contrast. They expose the harmonies and tones that are at the core of the music. Individually they are each masters of their own domain.

The shape of the evening has been well designed and with anecdotes and ‘Barbra’ facts scattered liberally between numbers the pace is breezy with only a slight dip in the second half with a couple of the more obscure choices in song.

Crowning an evening of sparkling entertainment, Liza sings Happy Days are Here Again returning to the stage after a well-deserved standing ovation to end with People. Audience who ma have come as fans of Barbra Streisand most certainly will have left as fans of Liza Pulman, she is, quite simply, superb!