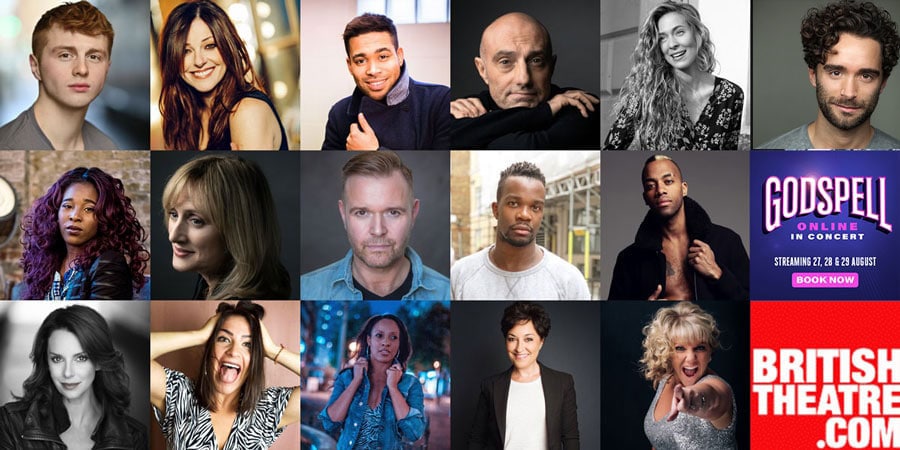 I cannot believe that it’s been thirty-odd years since I first (and last) saw Godspell. On those occasions (for I was instantly addicted and revisited the show MANY times) sitting in the Sydney Opera House Playhouse, I was enchanted by the talent and simple stories of humanity at its best and sometimes worst told through the Gospel According to St Matthew.

Now, at a time when many of us are housebound, scared of what is to come, watching violence and humanity at its worst on our televisions, it was a joy to be reminded of Godspell’s glorious score put together in an ambitious way by Michael Strassen and his talented team.

As this is the score in concert much of the show’s book has made way for Godspell’s iconic songs presented as a moveable feast.  Anchored by Darren Day’s wonderful Jesus, you quickly realise that this is far more celebration than pure concert.

There are some wonderful larger than life explosions of joy here. Alison Jiear’s soulful Bless The Lord blew away months of funk and cobwebs, whilst Darren Day and Matthew Croke’s All For The Best made one of musical theatre’s most diabolical duets look like child play. Danyl Johnson’s Light Of The World had an uplifting vocal but opened a window onto the outside world as did Jerome Bell’s We Beseech Thee with Jenny Fitzpatrick’s Prepare Ye The Way Of The Lord completing a triumvirate of filmed pieces that were filmed in such beautiful environs that I actually found myself wanting to leave my flat to find these places. Glorious!

Ruthie Henshall provided suitable sauciness with a bubbly take on Turn Back O Man that tickled my funnybone, as did Ria Jones’s Learn Your Lessons Well which showcased Ria’s vocal flexibility.

Some of the most touching and powerful moments here are amongst the simplest. Sam Tutty’s All Good Gifts was heaven-sent, John Barr, Jenna Russell and Sally Ann Triplett’s gorgeous stillness gave On The Willows such integrity and had me covered in goosebumps, whilst Jodie Steele’s Beautiful City soared.

At a time when the absence of theatre has had me despairing for the future and realising for the first time just how much talent and music feed my soul, the combined effect was one that had my face aching from smiling ear to ear to a solid hour. Actually for two hours as I rewatched it almost instantaneously and am about to go again once this review goes online.

As much as I enjoyed this concert presentation, it’s not the same as live theatre, but for the moment taking society as a whole into consideration, it will have to do. Thankfully, I have 24 hrs to watch and watch Godspell again to fully recharge my batteries and I fully intend to do just that!