I always look forward each year to the opening night of the latest offering from Cirque du Soleil at the Royal Albert Hall and this year the world-famous company have brought a steam punk-inspired extravaganza to London – Kurios! This year’s show was a visual feast with stunning sets and props designed by Stephane Roy and Costumes by Phillipe Guillotel, augmented and enhanced by a talented pool of musicians and a team of choreographers who had the troupe moving with a frentic energy that was ever so infectious. Act Two sees The Seeker endowed with a magical mysticism and awe by Anton Valen soar into the clouds to another realm and gravity lose its grip starting with a team of flying crazies on the Acro Net, dodgy-looking characters in raincoats transforming into some of the campest sea creatures ever all whilst soaring at time near to the roof of the Royal Albert Hall whilst the audience gasps got louder and louder. 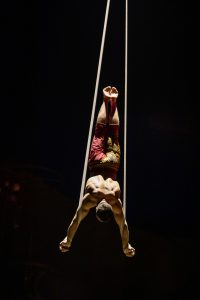 Roman and Vitali Tamanov’s Aerial Straps were incredibly graceful and displayed a refined synchronicity and strength that made this section of the show my personal favourite. I found tonight that this duo together with the Banquine performers showed how even when stripped back and without some of the complex apartatus of acts like the Russian Swings, pure talent and a group of mega talented acrobats can leave an audience dumbstruck.

New to any Cirque du Soleil show I’ve previously seen was the Theatre Of Hands which was a clever short part of Act Two and showed off the dexterous talents of Nico Baxias projected onto an ethereal balloon floating high above the crowd.

As per usual, this talented team make it all look far too easy. It’s not! What made me smile and laugh throughout was the obvious glee being had by the performers as they wound their way through this journey into a bizarre cabinet of curiousities.

The only downside of tonight show was that the stage seemed to be slightly lower than usual and a bit of the action was lost if you were sitting on the ground level.  A small thing but worthy of note in a show which was otherwise flawless.