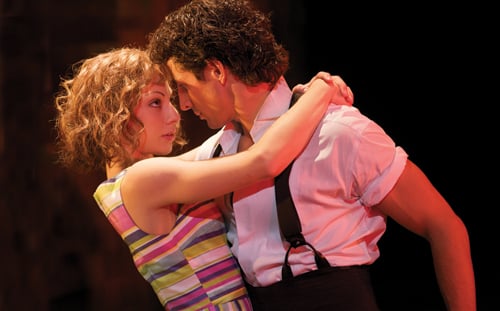 Nobody puts Hannah Vassallo in the corner – certainly not since she made her acting debut in West End’s Dirty Dancing.

You hail from a family of creative types. Was it par for the course you being a performer?
My whole family is definitely very creative and we all work in artistic fields. It wasn’t always the case that I would perform on stage as I had a lot of interests when I was growing up which I loved equally. But there came a point when I had to focus on one thing in particular and I chose dance. I went to a very academic school so effectively I followed an alternative path to everyone else. I think that whatever I had chosen to do would have been practical or creative in some way as I find it hard to be still and concentrate for long periods of time!

What did you feel you got out of your training at Rambert?
Rambert was a fantastic school that was very much suited to my personality. There was no mould that they would try and fit you in to unlike some other schools, so they worked hard to encourage you to reach your own potential and to do it off your own back. Self discipline was a huge part of my training. I learned very quickly that in order to achieve what I want I have to work as hard as I can to make it happen.

You started working with Matthew Bourne aged 20. It must have been magical working on some of his biggest shows?
I was very lucky to work with Matthew at such a young age. It was incredibly exciting to be of such a wonderful company with great opportunities to dance all over the world. I always knew how lucky I was to be doing something that I loved and that made me work harder to achieve more because I just wanted to keep doing it for as long as possible.  It’s not every day that you get to travel the world doing something that you love.

What country would you say proved the best audiences?
Every country I’ve been to has had a different type of audience. Similarly different cities in the same country have different types of audiences. They all have their own ways of showing appreciation. For example American audiences wont be afraid to laugh at jokes and clap at obvious moments whilst the Japanese audiences will be silent the whole way through and then erupt into applause at the end. I do like it when you hear audience reaction. It reminds you that they are enjoying what they are seeing and it makes an enjoyable experience for everyone.

Had you ever thought about treading the musical theatre boards before Dirty Dancing?
I’d always joked amongst my friends that I’d get a job in the West End.  Mainly because it was a ridiculous idea as I’m not the best singer! It was very funny when I got one of the few lead jobs in the West End that doesn’t require singing.

It must have been a bit daunting auditioning for the show, having never had an acting lesson?
I nearly didn’t go to the audition in the first place. I thought I’d never have a chance as I’d never done a show like this before and had no experience of anything they required other than dance. When I was given script to learn I was first of all very surprised, then slightly terrified as I’d never held a script in my hand let alone speak out  loud in an audition situation. And all this in an American accent! I remember shaking like a leaf but once I had started to relax I loved it and became more confident. It was the first time I had used my voice and I loved it.

Everyone knows the film Dirty Dancing. It must be a joy playing ‘Baby’ which is such an iconic role?
It’s such a great opportunity to be playing this role. Whether people know the film or not she is a character they can identify with on so many levels. She makes such a huge journey from start to finish and it’s a great challenge to try and tell her story night after night.

What advice would you give to someone thinking about a career in the industry?
I would say do it because you love it. Work hard and have a strong head at all times.

Do you feel it’s important to find other passions in life other than performing?
It’s so important to develop different aspects of your life. All these things feed each other and in turn you become a more rounded performer and person. Everything feeds everything else.

What are yours?
I love drawing and doing crafty types of things.  I make lots of bits and bobs for my house which is a great creative outlet. I also love playing music and socializing with friends – when I get the chance!

Dirty Dancing is running at Aldwych Theatre in the West End.
www.dirtydancinglondon.com