Megan Mullally and Robert Lindsay are to star in a major revival of the classic musical Anything Goes at Barbican Centre from 8 May 2021. 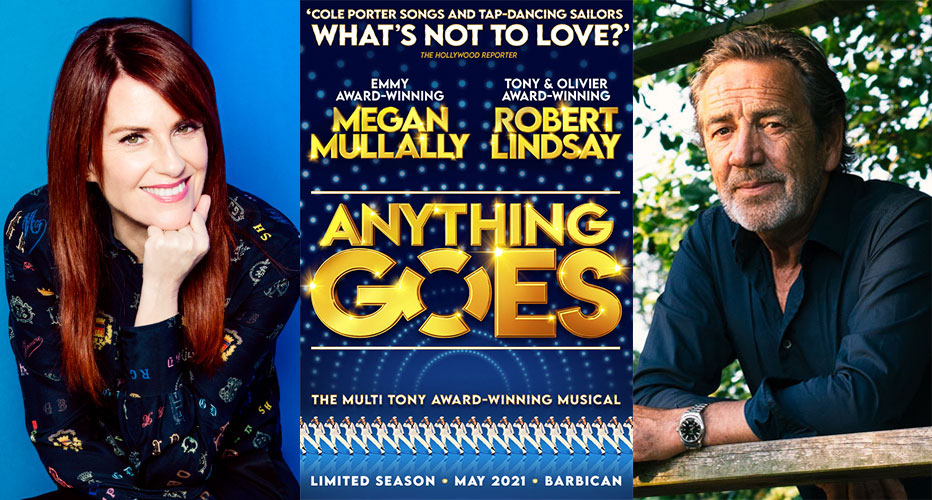 Will and Grace star Megan Mullally will make her West End debut as Reno Sweeney opposite Robert Lindsay as Moonface Martin in Cole Porter and PG Wodehouse’s Anything Goes. This revival of the multi-award-winning musical is to see Kathleen Marshall re-imagine her Broadway production of the musical which was nominated for nine Tony Awards and 10 Drama Desk Awards, winning Best Revival and Best Choreography for both.

When the S.S. American heads out to sea, etiquette and convention head out the portholes as two unlikely pairs set off on the course to true love… proving that sometimes destiny needs a little help from a crew of singing sailors, a comical disguise and some good old-fashioned blackmail. This hilarious musical romp across the Atlantic featuring a collection of some of theatre’s most memorable songs – including ‘I Get A Kick Out of You’, ‘Anything Goes’, ‘You’re the Top’, ‘Blow, Gabriel, Blow’, ‘It’s De-Lovely’, ‘Friendship’ and ‘Buddie Beware’ – will take you back to the Golden Age of high society on the seas. Anything Goes is set to sail away with audiences all over again.

Megan Mullally said: “Anything really does go, is the thing, and I’m excited to be coming to London where Robert Lindsay and I will promptly unleash ourselves upon that wonderful town for 15 weeks of farce and frolic. Under the tutelage of the devilishly clever Kathleen Marshall we shall endeavour to do the memory of Cole Porter proud. Meanwhile, I will endeavour to get my a** to a tap class. A brand new rendering of a great old entertainment is on the horizon…something tells me I’ll get a kick out of spending my summer in London next year! Tally-ho!”

Robert Lindsay said: “I am so looking forward to returning to the stage in the medium I love – musical comedy.  And what better than Kathleen Marshall’s revival of Anything Goes at the wonderful Barbican Theatre. The perfect remedy to shake off the blues of 2020.”

Kathleen Marshall said: “I’m so thrilled to have the opportunity to reimagine Anything Goes for the West End.  I’m a huge fan of both Megan and Robert and I know we will have a blast working together on this iconic musical comedy.  I adore London and can’t wait to bring this joyous show to UK audiences!“

This revival of Anything Goes has music and lyrics by Cole Porter, original book by P G Wodehouse, Guy Bolton, Howard Lindsay and Russell Crouse with a new book by Timothy Crouse and John Weidman.

Anything Goes will have set designs by Derek McLane, lighting design by Neil Austin, sound design by Simon Baker and musical supervision by Stephen Ridley.

BOOK NOW FOR ANYTHING GOES AT THE BARBICAN THEATRE