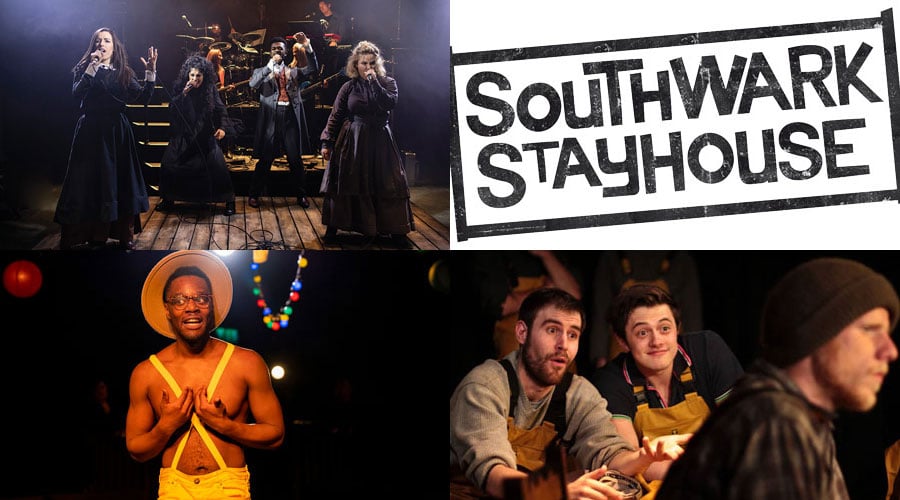 Southwark Stayhouse presented by Southwark Playhouse will launch with the following productions:-

The world premiere of new British musical Wasted ran in The Large during September/October 2018.

Through the lens of a rock documentary, Wasted gives an access-all-areas account of the struggles, heartbreaks and triumphs of the three Brontë sisters Charlotte, Emily, Anne, and their brother Branwell. Brought up in a remote, poverty-stricken town in Yorkshire, without money or opportunity, they fought ill-health, unrequited love and family feuds to write some of the most celebrated literature including Jane Eyre and Wuthering Heights.

Never afraid to rebel against expectations, the lives behind the pages expose a struggling, squabbling, ferociously driven, drug-fuelled crash and burn trajectory from obscurity to celebrity and ultimately to their untimely deaths. Coupled with a rock score from Christopher Ash (Showstoppers – Oliver Award winner for Best Entertainment), book and lyrics by Carl Miller (Emil and the Detectives, National Theatre), directed by Adam Lenson (The Rink, Superhero), the Brontës ask – was it all wasted? This is the Brontës as you’ve never seen them before.

Twelfth Night ran in The Little in January 2019 and was part of our annual Shakespeare for Schools initiative, the most ambitious element of our Youth and Community Programme, reaching over 1500 young people every year in Southwark and Lambeth. The project aims to enable more young people to engage with Shakespeare and have the opportunity to see live theatre that is exciting, innovative and contemporary when they might not otherwise have the chance to do so.

Whilst searching for her lost twin brother in Illyria, Viola stumbles upon something entirely unexpected – love. But in Illyria, love’s true course is never going to run smoothly.

No one is quite what they claim to be in this strange place – male/female, lover/fighter, happy/sad, fool/priest – which leads to all sorts of complications.

Shakespeare’s classic comedy of love and identity is given a rollicking makeover with a festival vibe and live music on stage. Grab your wristbands now before they all get snapped up!

Directed by RSC Creative Fellow Anna Girvan (Associate Director, Leopoldstadt and People Places and Things) and designed by Anna Reid (The Cardinal, Dear Brutus) this production is suitable for everyone aged 10 and above.

Bound ran in our old Vault space underneath London Bridge in 2011. It follows the fortunes of six trawlermen from Devon as they embark on one final voyage. Compelled by the threat of bankruptcy, fishing trawler ‘The Violet’ is forced out into treacherous weather. Competing against the overpowering force of nature, the tribulations of life with the opposite sex and each other’s egos, will they lose more than a way of life?