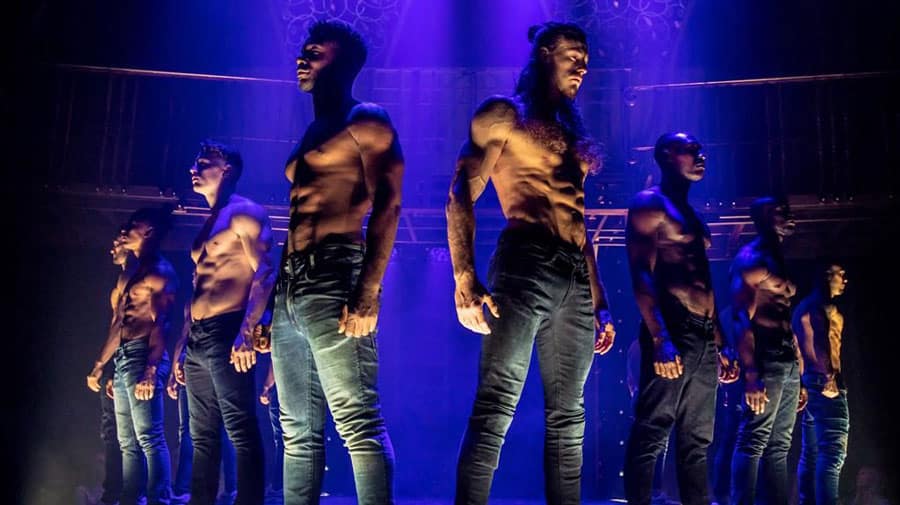 On a miserable London evening, 300 women, 8 men and I found ourselves in the redesigned Matcham Room at London’s Hippodrome Casino to catch the much-hyped Magic Mike Live created and directed by the man himself Channing Tatum.

There is no getting around the fact that this is a glorified strip show of a kind, except the men on show, don’t show as much as many shows of its kind that have come before. Old stereotypes are quickly dispelled and the audience is treated to a 90-minute floorshow with men aplenty bumping and grinding their way through some incredibly sexy routines.

Guided by MC Sophie Linder-Lee, this is a modern take on women’s desires, keywords like trust, consent, and personal space abound. Female members of the audience are repeatedly told that they are powerful, free and enough. It’s like a Tony Robbins empowerment rally for today’s women with more than a hint of testosterone.

The Matcham Room at the Hippodrome has been refitted with some clever staging, and enough lighting to stage a small pop concert. Rob Bissinger and Anita La Scala have packed enough tricks into this small space to put any Vegas floor show to shame. Combined with Luke Hall’s body enhancing video design and Philip Gladwell’s lighting this is a well thought out extravaganza that inhabits every inch of the auditorium and yes even the balcony gets more than its fair share of up close action and audience participation.

In a style that is very reminiscent of the style of choreography, you will have seen performed by Tatum himself in the Magic Mike Movies we are treated to a sort of guide to what women want (although it’s a shame that there are almost no men in the audience to hear the message).  In just over 90 minutes Aaron Witter, Anthony Donadio, Brian Siregar, Daniel Ralph, Dean Stewart, Harry Carter. Jack Manley, Jake Brewer, Manny Tsakanika, Maxwell Trengove, Pip Hersee, and Ross Sands work the audience and put a serious amount of masculinity into the super stylish choreography they perform. They’re a talented bunch even giving us a musical number with many of the troupe playing instruments and showing their talents.

Large £20 cocktails abounded at tables throughout the space and top marks have to be given to the incredible floor staff and stage management who keep this production running slickly and making sure that overboard infatuations and the grabbers don’t go too crazy.

Trying to rate Magic Mike against Shakespeare, Pinter or Dreamgirls is impossible. This four-star review is based on the slick presentation, the obvious enjoyment of the audience and the talent that is working their arses off to make Magic Mike Live London a night that had the whole auditorium yelling for more.