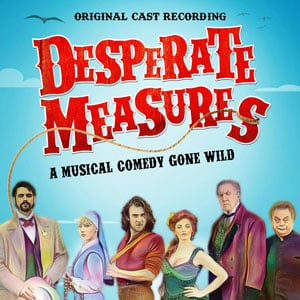 Shakespeare never ceases to surprise me, I’ve seen multiple interpretations of his works set in all manner of ways and you really can set these classic stories in all manner of places and periods. Sometimes, with a bit of adaption by modern-day creatives, the unexpected happens and you end up with something substantially better than what you began with.

So it is with Desperate Measures. I would have loved to have been in the room when the idea was floated to turn Measure For Measure, one of Shakespeare’s problem plays into a musical set in the Wild West in 1892. Yet here it is and it’s something quite wonderful.

A handsome young cowboy arrested for murder, his sister who is a gun-toting novice nun, a harsh Governor, a sozzled priest, a stripper, and a steadfast Sheriff make this show strangely compelling and a real hoot!

Peter Kellogg (Book and Lyrics) and David Friedman (Music) provide a score that had me smiling and more than occasionally belly-laughing throughout. David Hancock Turner’s orchestrations are economical but so incredibly atmospheric with wonderful banjo and violin parts that just resonate with that wonderful country ‘thang’ that has you toe-tapping whilst you sit trying to follow the shenanigans of this show. It’s a slick, perfectly paced comic romp and this little band keep the proceedings lively!

On two listens, I can safely say it’s an immensely hummable score, it stays on the brain and I have to say I’m wishing I could get to see a production sooner rather than later as it’s really tickled me and rather than getting mired down in its own cleverness, the composers really seem to have hit the jackpot with this clever take on Shakespeare.

Conor Ryan bursts off this recording as Johnny Blood, you just couldn’t ask for better. He’s so dim you may as well be in a blackout! Emma Degerstedt brings Sister Mary Jo to life and it’s some of the subtleties that work on this cast recording that got me most interested. Take for instance her number with Bella Rose the stripper (Lauren Molina) The Way That You Feel. As the central deceit of the show is planned, each woman has a moment of realisation thanks to the others perception, it’s subtle but the lyric and recorded performance deliver the intent in droves.

Nick Wyman’s Governor is suitably devious, a man prepared to trade virtue for a pardon, but with what he considers perfectly justifiable reasons. he even gets a fab musical comedy number Some Day They Will Thank Me to monologue with the audience.  His duet with Sister Mary Jo About Last Night is musical comedy gold – an absolute delight! Throw in Peter Saide’s steadfast Sheriff and Gary Marachek’s sozzled priest and it’s easy to see why this musical caught the imagination of audiences when it premiered.

A good cast recording serves as not only a record of a show’s score but as a calling card and ambassador for a show, and I can’t help but think that as a result there are likely to be a lot of productions of Desperate Measures popping up all over the world.

One can only hope that one of the UK’s more adventurous producers gets into gear and brings this show to the UK. Otherwise, we may need to resort to Desperate Measures!

BUY A COPY OF DESPERATE MEASURES