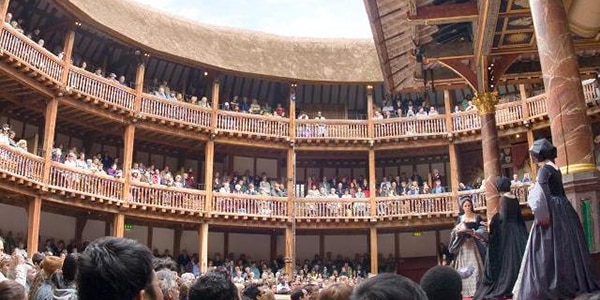 The original Globe Theatre is famously the site where Shakespeare’s plays were first performed. Built in 1599, it was destroyed in 1613 when a malfunctioning cannon set the building ablaze. It was rebuilt sometime later and finally closed in 1642, demolished a year later.

In 1970, Sam Wanamaker founded the Shakespeare Globe Trust, an organisation with the intention of construction a recreation of the theatre at Bankside, close to its original location.

The new Globe Theatre opened in 1997 with Mark Rylance as its first Artistic Director. True to its Elizabethan roots, the theatre has a seating capacity of 857 on top of a ‘groudlings’ pit space that fits 700 standing (roughly half of a typical Shakespearean audience). During the building of the new globe, an indoor theatre shell was constructed next door, primarily used as rehearsal space.

In 2012, it was announced the theatre would be completed at a cost of £7.5 million and named the Sam Wanamaker playhouse.

The theatre (a replica of a Jacobean era theatre, including pit benches, horse-shoe galleries, and lighting provided by candles) opened on 15th January 2014 with a production of The Duchess of Malfi.

Get social with Shakespeare’s Globe:

Otherwise, please click here to continue to the Shakespeare’s Globe...
x
Send this to a friend