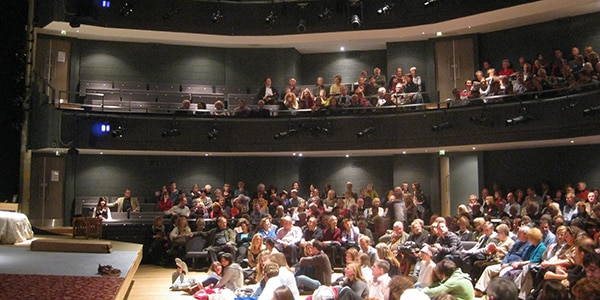 The residents of Kingston and the local Councillors came up with the idea of The Rose Theatre in 1986. When building work began, the council provided £5 million of the £11 million construction cost, and the shell of the building was provided for free by St. George plc. A production of As You Like it directed by Sir Peter Hall was performed within the shell of the unfinished building in 2004, with the official opening production (Uncle Vanya) beginning on 16th January 2008.

The design of the theatre is based on Rose Theatre bankside, and features a 900-seat auditorium in an Elizabethan design. The Rose regularly hosts visiting work, which encompasses theatre, music, and comedy, but has been gradually increasing the amount of in-house productions. The Rose also provides a variety of performance opportunities and workshops, including a youth theatre, community choirs, seminars, writing courses, acting classes, and poetry parties.

The Rose receives no Arts Council funding, and is instead supported by Royal Borough of Kingston and Kingston University London (who hold their graduation ceremonies in the theatre).

Get social with Rose Theatre Kingston:

Please click here to continue to the Rose Theatre Kingston  >>>