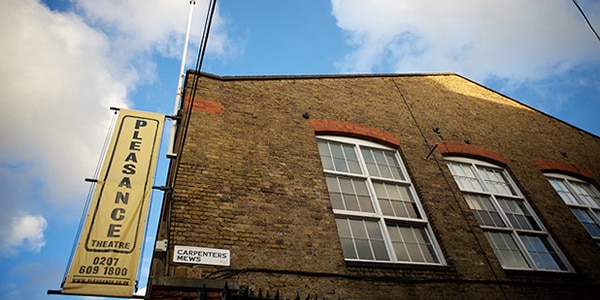 The Pleasance Theatre Islington opened in 1995. It is the English cousin to The Pleasance Edinburgh, a collective of venues that opened in 1985 which is now one of the most highly regarded venues at the Edinburgh Fringe Festival.

The Pleasance Islington hosts a variety of performance, with emphasis on comedy of all kinds (sketch, improve, stand-up, character, etc). Famous acts to have played the Pleasance include Adam Hills, Mark Watson, Russell Brand, Mark Thomas, Micky Flanagan, and The Mighty Boosh.

As well as its 289-seat main house and 55-seat studio space, the theatre also contains rehearsal rooms and recording studios. These facilities are often used by companies preparing for the Fringe Festival.

The Pleasance runs a work-in-progress season, showcasing unfinished work from comedians at discounted ticket prices, and a youth theatre company (Young Pleasance) which produces a large scale production at the Festival every year.

The theatre also has an annual grant called The Charlie Hartill Special Reserve Fund, which provides an opportunity for a young theatre company to perform at the fringe, as well as four new comedy acts (in a show called The Comedy Reserve).

Get social with Pleasance Theatre:

Otherwise, please click here to continue to the Pleasance Theatre...
x
Send this to a friend