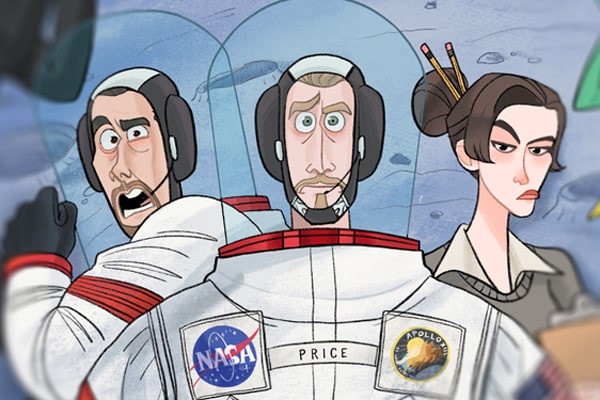 July, 1969.  Los Angeles.  Edward Price is a man with problems.  His ex-wife left him for a famous actor, his house has been seized by the IRS, and the sci-fi TV show he produces just got cancelled in its first season.  But that’s show business for you.

Things look bleak until the CIA arrive with a suitcase of money and an offer.  Edward now has five days to fake the moon landing, and pull off the greatest conspiracy in American history.  If he succeeds, he’s set for life.  If he fails…well…best not to think about that.

In celebration of the Fiftieth Anniversary of the Apollo 11 Moon Landing, Arrows & Traps Theatre bring their critically-acclaimed approach to a brand-new comedy set in the back streets of a Hollywood lot. One Giant Leap is about the power of having an impossible dream, realising it’s impossible, and then trying your hardest to fake it and hope no one notices.

One Giant Leap is a new comedy by Ross McGregor who will also direct this production. Set design is by Justin Williams, lighting by Ben Jacobs, choreography by Matthew Parker and sound by Alastair Lax. Casting will be announced soon.

BOOK TICKETS FOR ONE GIANT STEP

Otherwise, please click here to continue to the Brockley Jack Studio Theatre...
x
Send this to a friend