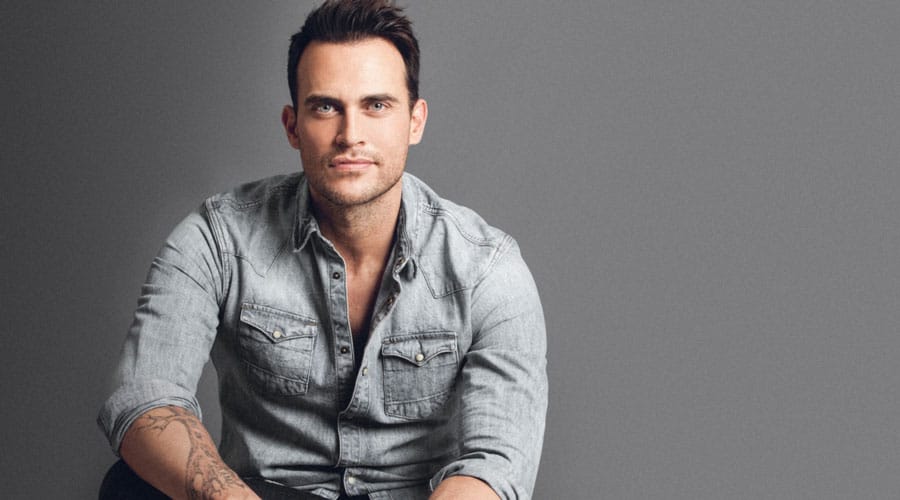 The crystal clear bright tones of this thrilling tenor, Cheyenne Jackson, burst forth in a blaze of technicolor sound with ‘Stand By Me’ (Leiber and Stoller) at the start of this latest in Seth Rudetsky’s wonderful online cabarets.  Cheyenne (sometimes ‘Shy’ for short) looked great in a smart Yves Klein blue jacket and white shirt, with his pale blue eyes flashing in a most complimentary way.  What a wonderful product of the extreme far west, the borderlands of northern Idaho and Washington state, where four feet of snowfalls in the winter, and the boy Cheyenne had to go out in that if he needed the out-house or a cup of water.  Anyway, if you’ve seen the movie that took its name from that opening song, you’ll probably get the general idea of the intense territory to be covered in this gig.

‘Something’s Coming’, Stephen Sondheim’s song from Leonard Bernstein’s ‘West Side Story’ (it’s complicated) was next up, showing the yearning, the drive, of a boy wanting something different, something more exciting, somehow, somewhere…  Cheyenne has a superbly dramatic voice, swerving and weaving between emphatic strength and diaphanous pianissimo, sometimes casually looping around the lyric, and sometimes punching out the story in a way that makes you want to go right along with him, wherever he might be going.  ‘Besame mucho’ (Sunny Skylar’s English text to Consuelo Velasquez’s arrangement of Enrique Granados’ melody), next up, was as obvious an invitation as anyone, even the most recalcitrant, might desire, and it made delirious use of his lower, honey and molasses, baritonal register.  All of this vocal development, apparently, was made possible for him just by listening to other singers – good ones – and going wherever their voices went, no matter how high, or how low.

But, he also had the great luck to have to wait and wait and wait, until he was in his mid-twenties, allowing his voice to mature until he got the impetus to move to New York and understudy Mark Kudisch (after moving to Seattle, he’d understudied him there in a touring production).  Kudisch gave him the backstage musical leg-up of all time in getting him to be his understudy on Broadway, a lucky move which after a mere six weeks resulted in him playing the part for a fortnight while Kudisch went off to do some opera.  The ‘something’ that was due had finally arrived!  Yes, real-life really is that crazy: and if anybody ever questions the credibility of the plots of musicals, just get them to take a look at the mad reality that lies behind them.

We could mention too that this week, the show got a nice new layout, with an inset for Seth while the numbers rolled, and split-screen only being used for conversation, with a calming blue-to-lilac background.  Technology moves on: there were still some sound glitches, but nothing we couldn’t cope with.  The wittily placed, ‘A Little Less Conversation’ from the Elvis-inspired ‘All Shook Up’ (Shy’s first lead) showed his rock’n’roll chops, and showed them going right up to a high C!  He’d already aced a low G, earlier; that gives him a two-and-a-half octave range to play with.  He must be a dream to cast!  ‘Don’t Walk Away’, a lush ELO tune, was another fine number for his high vaulting lyric tenor from the deliciously whacky, ‘Xanadu’.

Then we wandered back into his best Forties heart-throb, practically Chet Baker style for ‘Old Devil Moon’ from ‘Finian’s Rainbow’ (Burton Lane-E.Y.Harburg).  To follow that, Cheyenne had a song of his own, a beautiful folk-inspired paean to his late father, ‘It’s OK to be gentle,/ It’s OK to be kind.’  And then we heard about his marriage to his husband, Jason, and their life together, which sounds like the most perfect thing imaginable: they have kids, and home cooking every day, that kind of beautiful thing.  With a saucy edge: Katy Perry’s ‘Teenage Dream’ (with its refrain, ‘Don’t Ever Look Back’) was the smart best-fit song for this moment in the cabaret; and that built into a great number from ‘The Full Monty’, the gorgeously country, ‘Like The Breeze Off The River’, an exquisitely wonderful David Yazbek song.  It was all wonderfully heart-warming stuff.

And so to Jason Robert Brown’s, ‘Hope’; a 2016 work of his, and a bit of an anthem for the Trump era, perhaps, although as far as I’m aware the American President has not been playing this at his rallies.  It works just as well for the past half-year of ‘strange times’, though.  Then we made our way to a show that did well on Broadway but never made it to the West End, Leslie Bricusse and Anthony Newley’s, ‘The Roar Of The Greasepaint, The Smell Of The Crowd’, and their fabulously successful and luscious ‘Feeling Good’.  Which took us to a grand finale of the more homespun John Denver’s always charming, ‘Leaving On A Jet Plane’, with the whole Jackson family – this Jackson family, two dads, two kids – singing along.  Perfect family entertainment.