The second round in Seth’s current series of online cabaret chat-shows brought us the velvet voice of Norm Lewis, another ground-breaking African-American performer: the first ‘Phantom’ of colour, as well as taking the lead in ‘Sweeney Todd’.  Lewis cut a chipper figure in a smartly lapelled, chequered suit, and opened up with ‘Rain’ from Ahrens and Flaherty’s ‘Once On This Island’.  His opening anecdote, though, about catapulting from waiting tables and performing in dinner-theatre right into his first New York jobs, picked up the tempo even more. One of those early roles was Joseph, which he played for the princely sum of $150 a week (gross).  Then came a string of other Broadway shows, including ‘My Fair Lady’, which lent a roughed up ‘Wouldn’t It Be Luvverly’ to his rep folder, and Seth honky-tonked it through a jazzy stroll.  Lewis’ is an always captivating sound: sometimes singing with a loose, bluesy attack, and invariably balanced with his round, perfectly supported and placed classical voice.  Yet, despite these qualifications, fame did not come easily…

Turning back the clock, we found out that Lewis is also a cruise-ship survivor: oh, well, that was something to do when he couldn’t get work with Disney. But, the really good news that came out of that experience, however, was the need to give up cruising and go to New York, the land of impossible dreams: which took us, very happily indeed, into a magically lyrical rendition of the great big tune from Joe Darion and Mitch Leigh’s, ‘The Man of La Mancha’.  There is a sexy, rock’n’roll immediacy in Lewis’ voice – Seth asked if he’d considered a pop career – where the lyrics are pushed forwards with beautifully neat and yet also natural articulation, allowing the story of a song to ‘unfold’ like the petals of a flower gradually opening to the rays of the morning sun.  And when Norm Lewis sings, ‘The Impossible Dream’, you believe his every word.

We heard about more dreams becoming reality in the Broadway revisit to, ‘The Gershwins’ Porgy and Bess’ (as distinct from anybody else’s African-American folk-opera of the same name).  This was effectively a conflation of the Heywards’ original play, with some of their dialogue getting back in place of operatic recitatives, speeding up the action and focussing the mind on the songs those two nice Jewish boys wrote for the show.  This is where Norm also showed the darkest, baritonal colours of his range: ‘I Got Plenty of Nuthin’, in Seth’s accompaniment especially, exemplified the extraordinary mix of African and Jewish rhythms and timbres in this score – the two inextricably fused together – and Lewis has the ideal voice to lift it into a more modern interpretation, straying true to the work’s ‘operatic’ roots, but pitching it right into the popular culture of today.  This is what makes a really great musical theatre performer: someone who can act as living bridge between the here and now and whatever it was that the writers had to tell us.

It is a reach, of course, for a baritone to play a tenor role, and The Phantom of the Opera is definitely a tenor… but one who needs the muscle and boots of a baritone to project his lines and give them the appropriate shine that makes them, well, sexy enough for the audience to take the character (and the show) seriously.  The joy of great music, however, is that it does what the singer needs it to if they can only find their way to the notes in the right way.  Lewis knows how to do this: his ‘Music of the Night’ was a masterclass in how to ‘declaim’ the ideas in a heroic, operatic way, and to pace this declamation through the harmonic progressions of the melodic lines, while at the same time being completely at one with the ‘spectacular’ effects of Lloyd-Webber’s music (and Seth’s playing brilliantly sounded these passages), including putting in a great top, ringing note when needed.  This is where Lewis achieves what every great writer for the musical theatre stage dreams of the (almost impossible to achieve) skill of inhabiting every single second of the action as a special, never-to-be-repeated moment, while also following the journey of the scene, so we always feel we’re moving forwards.  Perfection achieved here, I think. 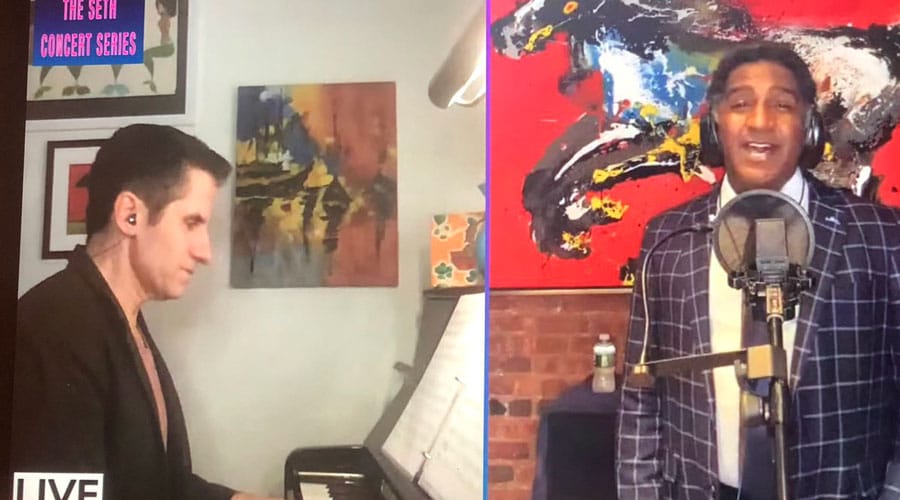 Seth, you see, not only chats to his guests, he also gives them notes (as, you suspect, he has been doing for some time).  He is famous for his online tutorials anatomising great songs (in the hands of great performers), and he approaches those interactions very much as an MD prepping a score with a cast.  This side of his art is really seductive: put a singer together with their musical director and just listen to them working together to find their way to the finished ‘performance’.  To the outsider, there is sometimes an apparently ramshackle quality to these conversations, but that is because both parties know what they’re doing so well, they can relax with each other, and they draw themselves towards the ultimate goal without ever actually arriving at it until the time of the precisely executed performance.

Bigger scale events, like appearing in the anniversary gala for ‘Les Miserables’, showed Lewis’ great facility for moving between fully voiced and more lightly breathed notes in Javert’s great monologue, each tonal characterisation perfectly judged to sound real and involving, so the listener can never ‘relax’ into following the great beauty of the melody and maybe stop paying quite as much attention to the sense of what is being said.  ‘Les Mis’, is – as the world knows – a bit of a saga, and it often seems that the struggles of actors to get into that gig are no less fraught with adversity and pain. So, when they get to sing, ‘Bring Him Home’, you really know where the agony in their voice is coming from. Lewis is able to sing this music as if he had just thought of it himself, which is – I think – the way any musical theatre composer wants it to sound.  Exquisite pianissimo at the conclusion, by the way.

Now.  Seth dishes the dirt.  Yes; Norm Lewis did not do any voice training until he was thirty.  So.  Now we know.  Whatever the approach, when he gets ‘I Got Rhythm’ between his teeth, he makes it sounds like as if it were written for his voice, knocking out some peachy harmonics over Seth’s suitably George-amusing-himself-at-the-piano tub-thumping.  As he says, ‘I try to impress you, Seth’.  Now, isn’t that nice of a singer to say to the pianist?  If only the world were always like that.

Thoughts of that kind meshed pretty quickly into a moment of reflection upon how we react to ‘social distancing’, which is fun to do, but it’s also getting to kind of be code for a, ‘What is your way of coping with the USA falling to bits?’ question.  David Friedman’s words and music provided the best answer: Lewis has the ideal chops for this lovely confession of bliss, ‘We Live On Borrowed Time’.  He focusses so much on the innocence, the simplicity of the ideas in lyrics that his vocals sound in a curious way as if they are inspired by the tradition of great lyrical male singers of the Fifties or Sixties, it’s a really seductive effect.  Mind you, he can also swing a lyric with the best of them.

Thus, nicely, this chat took its own, particular, distinctive course, and brought us into a finale with a limpidly nimble arrangement of, ‘Before The Parade Passes By’.  Maybe Lewis will be the world’s first male Dolly Gallagher Levi (as opposed to Danny La Rue doing it in drag)?  Who knows!?  Then, with a final nod to an exit collection for http://www.blacktheatreunited.com, a campaigning and support group that anyone can join or support, we ended another blissful hour in the company of Mr Rudetsky and one of his great friends.  And the both of them would just like us all to know that in this world, we should always remember, even if a dream seems impossible you owe it to yourself to keep on reaching out for it.  You never know.  You just might get there.