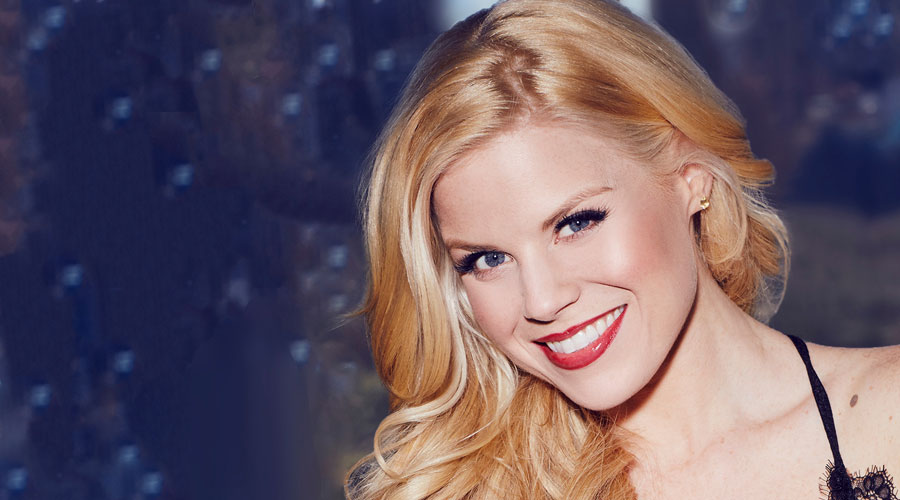 ‘The Voice’, ‘The Belter’,… this weekend the great Megan Hilty connected from L.A. across the continent of North America with the indefatigable Mr Rudetsky in New York City for the third in his series of intimate lockdown cabarets.  As usual, Seth fairly shovelled the jokes our way (‘There’s going to be no singing tonight’ was one of the first balls kicked into play).  This dry martini humour of his is the zest that keeps the cocktail bright.  Of course, we got music.  One of Hilty’s hit songs from the TV series ‘SMASH’, the Grammy Award-nominated, ‘Let Me Be Your Star’ (Marc Shaiman and Scott Wittman) made a cracking start, showing off the voluptuous warmth of her extraordinary instrument.  Officially she may count as a soprano, with a delicious top register, but that chest voice is to die for, and – naturally – she has perfect ‘passaggiato’ between all the notes any composer might request.

The power behind the this beautifully filled throne, however, is the producer Mark Cortale, who sees comments and questions typed into the side-screen by the audience and then feeds a carefully selected few back to the ‘cast’.  So this gives us an element of interaction with the ‘house’, in place of the customary audible responses of applause, cheers, laughter, gasps, oohs and aahs!  You know.

Rudetsky’s aim in this series – indeed, in all he does – seems to be to make a positive contribution towards not only a better appreciation of the ‘art’ and artistry of musical theatre (and allied entertainments), but also a clearer understanding of the psychological processes involved.  This is surely exactly what we need during the era of lockdown and acres and acres of expensive closed theatres.  Not that we dwell unnecessarily on things that get us down.  Hilty gave us next, a witty kewpie-doll-esque rendition of ‘You Will Be Popular’: a breezy comic turn from the mega-blockbuster, ‘Wicked’ (il genio creator: Stephen Schwartz).  As if that weren’t enough, we also got from that show, ‘For Good’, one of the most heart-meltingly exquisite songs of recent years.

It is, of course, easier to look back over what has been done when there was a functioning ‘industry’ than to peer forward into the impenetrable murk of an unguessable future.  But Hilty is making plans and rolling stuff out into the socially distanced world of animation, although specific details are oftentimes still lurking under embargo.  Thus we came back to thinking about, ‘Somewhere That’s Green’ (previously the personal property of Ellen of the same name – different spelling!) from another big brand of Hilty’s, ‘Little Shop of Horrors’, an immaculate lyric by Howard Ashman to Alan Menken’s deceptively simple tune.  Seth then got to join her in a fine duet of ‘Suddenly Seymour’.  Performances like this really point to the ‘folk’ ethos deep in the heart of American musical theatre, THE indigenous dramatic art form of that land.  The anthemic, gospel strains could so easily emanate from a Sunday afternoon marathon session down at the chapel, with the ladies and gentlemen, boys and girls, and those who identify differently all in their best attire, making the music, sharing the spirit.

But the production process for Broadway shows is more complicated: usually long, often difficult and very demanding.  Hilty regaled us with an anecdote about her part in the gestation of ‘9 to 5: The Musical’, and how she worked with the team led by the great Dolly Parton.  The collaborative nature of theatre is what everyone now misses, and that social bonding – from first pitch to a producer to saying good-byes to (ideally) happy customers leaving at the end of a performance – is what the thing is all about.  For an illustration of her versatility and adaptability, Megan showed her command of accent and style, with a real Dolly-sound for, ‘I’m Just A Backwoods Barbie’, that segued handsomely into the shoulder-swinging title song.

As if the stage were not pressurised enough, the world of TV is even more extreme in terms of the risks involved, and the firm hold that production companies like to exert over the talent, inviting performers to ‘test’ for roles.  If they sign you up, then they won’t be paying you, but you cannot test for anything else, and you may be up against several others – only one of whom is going to be picked for the role.  It’s tough!  So, people, every time you see a US TV show, reflect that the cast in order to get there have probably had to crawl through burning coals.

All the more reason, then, to grasp just how vital the ‘family’ side of the industry, and indeed life is.  Hilty doesn’t just live this herself, but backs ‘You Gotta Believe’, an organization that provides continuing ‘family’ support for orphan children without anyone else in their lives.  ‘That Second-hand White Baby Grand’, another song from ‘Smash’, was the perfect number to encapsulate this aspect of her life and work.  Time and time again, this repertoire turns towards stories of struggle through adversity, giving voice to those who find life hard and yet still give their utmost to reach towards something better, ‘something beautiful’.  That is also what we found in Emily Skinner’s, ‘The Alto’s Lament’, a virtuoso calling-card cabaret turn for any work-a-day fantastically gifted and brilliantly accomplished singer, that Hilty sings the heck out of.

However, we need to ponder how much theatre stories are also about reinforcing social stereotypes.  Megan tackled this, too, knowing only too well the uncomfortable truths that often lie but a short distance beneath the surface glitter.  In particular, how frequently do we find the narrative of women being shown ‘at odds with each other’, or who are demonstrated to be bad mothers and wives and therefore deserving of punishment?  And what better riposte to that nonsense could there be than Sara Bareilles’, ‘She Used To Be Mine’ from ‘Waitress’?  It was sung here with Hilty’s full passion and commitment.

Yet, opening doors is what this show is also about, and we got another of the lucky entrants who have been chosen to show their wares to the guest: not only that, this time we got a solo performer and also a trio of voices to knock out a grand finale, complete with a crowning top harmony of stratospheric dimensions.  It’s another clever way to link into the audience and to remind us to the vast pool of talent there is the USA.  Hilty followed this with a beautifully modulated performance of the eleven o’clock number from Ahrens and Flaherty’s ‘Ragtime’, ‘We Can Never Go Back To Before’.  How true and right she made it sound today.  And finally, to roll it all up, we turned again to the world of ‘Smash’ and ‘They Just Keep Moving The Line’: another perfectly chosen commentary on now and today’s world.

Relevant?  Punchy?  Gorgeous?  I should say so.  Honestly, cabaret doesn’t get much better than this.