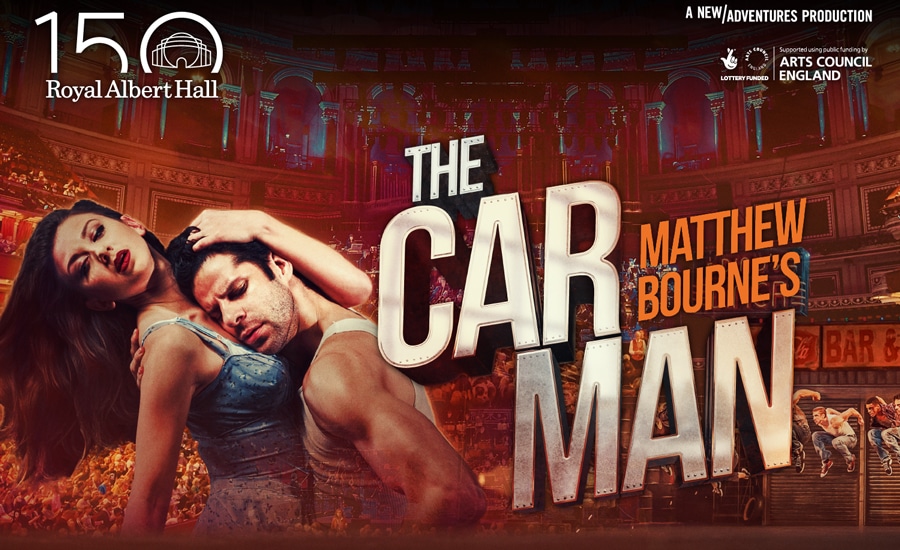 The multi award winning, dance-thriller based on Bizet’s beloved Carmen, The Car Man will be completely reimagined for the gladiatorial arena of the Royal Albert Hall, adding a frisson of danger as the dancers perform throughout the auditorium amid stage designs by Olivier and Tony award-winner Lez Brotherston.

Featuring an expanded company of 65 dancers and musicians, a live orchestra and epic new designs, this will be the first time New Adventures performs a full production at this historic and world-renowned venue.The event is one of the highlights of the Royal Albert Hall’s 150th anniversary celebrations.

The title role of ‘Luca, The Car Man’, will be played by Will Bozier and Richard Winsor. Will Bozier, playing ‘Luca; for the first time, was last seen as ‘The Swan/Stranger’ in “Matthew Bourne’s Swan Lake” in 2018/20 and also stars in the recent film version. Most recently, he has been featured in Andrew Lloyd Webber’s “Cinderella” at the Gillian Lynne Theatre.  Richard Winsor, also a former Lead Swan, has a history with “The Car Man” that goes back to his debut with New Adventures in 2001. He has played several roles within the production (including ‘Angelo’) and now returns in his debut as ‘Luca’. As well as playing a host of leading roles with New Adventures he was most recently seen as ‘Tony Manero’ at the Peacock Theatre in “Saturday Night Fever”.

The role of ‘Lana’ will be danced by Ashley Shaw and Zizi Strallen. Ashley Shaw has been a Principal performer with New Adventures since 2009 playing most of the leading roles in the repertory. She won a National Dance Award for her acclaimed portrayal as ‘Victoria Page’ in New Adventures “The Red Shoes” in 2018. Also returning to the role of ‘Lana’ is Zizi Strallen who won a National Dance Award for playing this role in 2016. Zizi is currently starring in the title role of “Mary Poppins” at The Prince Edward Theatre.

The role of ‘Angelo’ will be shared by Paris Fitzpatrick and Dominic North. Paris Fitzpatrick was most recently seen in Matthew Bourne’s newest work, “The Midnight Bell” and also created the role of ‘Romeo’ in New Adventures hit production of “Romeo and Juliet” in 2019. This will be his debut as ‘Angelo’. Dominic North, one of New Adventures most popular dancers for close to 20 years will return to the role of ‘Angelo’, a role that he also plays in the most recent film production. He was most recently seen as ‘Fritz’ in the hit production of Nutcracker!

‘Rita’, Lana’s older sister, will be performed by Kayla Collymore and Kate Lyons. Kayla Collymore will be making her Principal debut in the role of ‘Rita’ in “The Car Man”. Kayla featured in New Adventures world tour of “Swan Lake” and can currently be seen in a variety of roles in New Adventures Nutcracker! Kate Lyons returns to the role of ‘Rita’, having played her to great acclaim in the recent film version. Kate joined New Adventures in 2010 for “Cinderella” and has featured in most of the company’s repertory since that time, most recently in “The Midnight Bell’.

The role of ‘Dino’ Lana’s violent husband will be played by Alan Vincent. Alan Vincent is returning to the show in which he created the title role of ‘Luca, The Car Man’ at the shows premiere in 2000. This time he will be playing the role of ‘Dino’ following a stellar career with New Adventures that saw him play leading roles in pieces as diverse as “Play Without Words”, “Nutcracker!” and ‘The Swan’ in “Swan Lake”.

Full Daily Principal Casting for the Royal Albert Hall Season will be posted on Tuesday 10 May.

Matthew Bourne’s vivid storytelling combines with one of the most passionately dramatic scores ever written, with musical arrangements by Terry Davies featuring Rodion Shchedrin’s Carmen Suite (after Bizet’s Carmen), to create a dance event like no other.

The 19th Century Spanish cigarette factory becomes a greasy garage-diner in 1960s America where a small-town’s dreams are shattered by the arrival of a handsome stranger. Fuelled by heat and desire, the inhabitants are driven into an unstoppable spiral of greed, lust, betrayal and revenge.

BOOK THE CAR MAN TICKETS ARE THE ROYAL ALBERT HALL