Inspired by Lee’s own childhood in Alabama, To Kill a Mockingbird features one of literature’s towering symbols of integrity and righteousness in the character of Atticus Finch, based on Lee’s own father. The character of Scout, based on herself, has come to define youthful innocence – and its inevitable loss – for generation after generation of readers around the world.

Published in 1960, Harper Lee’s debut novel To Kill a Mockingbird was an immediate and astonishing success. It won the Pulitzer Prize and quickly became a global phenomenon, with more than 50 million copies in print to date. Considered one of the great classics of modern American literature, the novel has never been out of print since its original publication.

“If Sorkin’s adaptation lacks the subtlety and plain-spokenness of Lee’s novel, it has moments of old-fashioned power-the playwright knows how to set up a court scene-and others of surprising tenderness, as when he briefly takes the fatherless Dill under his wing. (“You have no business being kind, but there you are,” he tells the boy.) As perhaps befits material that has been a high-school mainstay for decades, this To Kill a Mockingbird has many teachable moments, perhaps a few too many. But it does-and I mean this as a compliment-a very decent job.”
Adam Feldman – Time Out

“Perhaps the most notable achievement of this thoughtful adaptation, and Bartlett Sher’s meticulously calibrated Broadway production, is that it takes Harper Lee’s 1960 novel – a modern American classic that pretty much all of us know either from studying it in high school or watching the outstanding 1962 film version – and makes us hang on every word as if experiencing the story for the first time.”
David Rooney – Hollywood Reporter 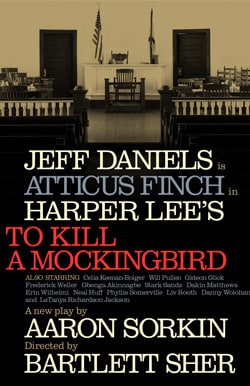