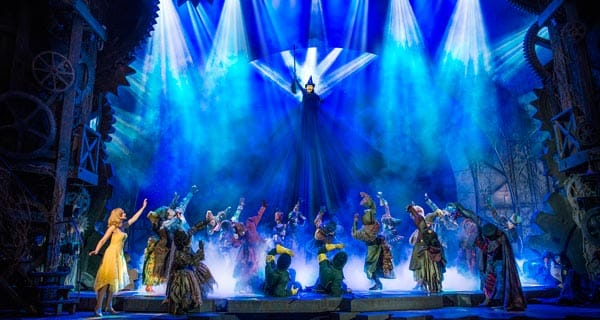 What are the chances of getting large audiences to come eight times a week to a musical about political propaganda, ethnic cleansing, racism, infidelity, peer pressure, murder, civil disobedience, official corruption, rewriting history, the flaws in a system where power is inherited, and animal cruelty? Next to none?

Wicked is about all of those things, wrapped up in a topsy-turvy, magic filled, paint-the-town-green silk gown, and it is now in its 9th year at the Apollo Victoria Theatre. It’s true that many people might see Wicked and never realise that these themes are swirling around and, indeed, that is one of the greatest strengths of Winnie Holzman’s book, which is based on Gregory Maguire’s novel. Greatly important issues are brought to the attention of young minds (and even older ones) cleverly disguised as a romantic musical comedy about the backstory to one of the most popular children’s stories/movie of all time: The Wizard Of Oz.

It is critical to approach Wicked as a separate work, entirely, from the Wizard of Oz; if one goes expecting to have some sort of experience akin to watching the Judy Garland film, inevitable disappointment will follow. Wicked has a completely different feel, style and intent, and needs to be appreciated on its own merits. It certainly helps one’s understanding of some of the jokes if a passing knowledge of that movie is possessed, but it is not essential to enjoying Wicked. 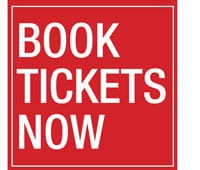 Fundamentally, Wicked is the story of a friendship between two young women, Galinda and Elphaba, from vastly different backgrounds, who become the witches Dorothy encounters in Oz when the tornado twists her from the safety of her farm home. Cleverly, the question of what constitutes goodness and wickedness propels the narrative and many things are never quite what they seem. Along the way to its “happy” ending, many familiar Oz characters are encountered: Lion, Tinman, Scarecrow, Flying Monkeys, Munchkins, and, of course, the Wizard. New characters too: the scheming, manipulative, tyrant-in-waiting, Madame Morrible and the Goat Professor, Doctor Dillamond, whose voice is taken away (literally and metaphorically) by the humiliation and oppression he endures.

Constantly, the narrative works on two levels: the pretty, colourful, exciting and romantic tale of two witches, where the outsider scores the handsome Prince (well, castle heir at least) and lives “happily” ever after; and the more adult exploration of weighty themes, difficult notions of power, responsibility and, most importantly, acceptance.

It’s this seamless duality which has kept Wicked playing to capacity houses on Broadway for over a decade now, and which will surely see it reach the ten year milestone in London too. That, and Stephen Schwartz’ remarkable and tuneful score. This is not a score that necessarily appeals on first encounter, although there are many obviously winning tunes that could be earworms for the right ear, but it is a score which develops in richness and complexity the more one hears it. Lush and beguiling, it calls for wonderful singing, an attribute which has not always been at the forefront of all casting choices in the London production.

It certainly is now.

As a result, the current incarnation of Wicked is the strongest London has seen. Everything about the production is in tip-top shape. The Ensemble is extremely good and produces thrilling vocal harmonies and effective, disciplined stage pictures and dance routines. The lighting (Kenneth Posner) is sharp and precise; the costumes (Susan Hilferty) look fresh, perfectly fitting and enchanting; the sound (Tony Meola) is crisp and clean, albeit with the occasional tendency to test the ear-drum splitting point for patrons. It looks, feels and sounds like a production in its ninth week, not its ninth year.

The best aspect of this Wicked is that the production has reverted to its essence: a tale of two witches, rather than the story of one green witch with a supporting character who is blonde. The title is Wicked, not Elphaba; it’s an apt title because, at different stages and in different ways, both central characters are, in fact, wicked and, in my view, the show only really works when the balance between Elphaba and Glinda is properly struck.

Actually, more than that: without a sensational Glinda, Wicked just can’t work as it was meant to work.

Happily, Savannah Stevenson is a sensational Glinda, in both Galinda and Glinda mode. She is easily the best performer I have seen in this role either in the West End or on Broadway. A consummate actress, she is precise and clear in every scene, covering with admirable dexterity the complete range from ditzy self-obsessed spoilt brat to radiant benign power-broker, with heartbroken girlfriend, betrayed and betraying best friend and popular idol beautifully judged along the way.

Her comic timing is excellent, her rapport with Elphaba and Fiyero sensitively achieved and sustained, and her scene with the Wizard and Madame Morrible, after all has been revealed, quite fabulous.

Vocally, Stevenson is breath-taking. She has a sure, clean Soprano which is warm and thrilling from top to bottom. The very high passages at the start of the show, in No One Mourns The Wicked, are pure and sound effortless; Popular is infectious and bursting with life; and there is real beauty in her work in Dancing through Life and the reprise of I’m Not That Girl. She is at her dazzling best in her duet work with Emma Hatton’s Elphaba: For Good is sublime, and there are quite magical moments, for different reasons, in the vitriolic What is this Feeling and the climactic Defying Gravity. In the harmonies, the two voices blend expertly, giving full value to Schwartz’ intentions.

But, best of all, is her acutely felt work in Thank Goodness at the start of Act Two. Stevenson dazzles here, charting Glinda’s happiness and pain while all the while maintaining a façade of radiant and controlled beauty. In Stevenson’s performance, Glinda becomes the important central force the show needs.

Emma Hatton was indisposed so the alternate Elphaba, Natalie Andreou, was on. Andreou is an excellent Elphaba and she certainly has no trouble with the high-belt Menzel legacy in Defying Gravity and No Good Deed. At the top of her brassy voice, the sound is exciting and rich. In the middle of her range, as well as the top, Andreou is in complete control and excels at colouring the passages she sings with rich and complex tones. The bottom of her voice is not as well supported as it might be, which leads to inaudibility and odd phrasing occasionally, but these are quibbles which do not impair the overall performance.

Andreou’s  acting is everything it needs to be and she makes the complexities and different facets of Elphaba’s journey as a character readily comprehensible and true.  She is, in turns, petulant, scared, warm, confused, scary, driven and inspirational. She makes complete sense of her relationship with, first, Glinda, and then Fiyero, and is especially good at establishing her complicated bond with her sister, Nessarose, and her deep respect for Doctor Dillamond. Especially adept at showing the soft heart under the brittle surface, Andreou gives a complete, multi-faceted and well-rounded star turn.

Fiyero is a difficult part to pull off successfully. Ostensibly a selfish, vain, posh, bad boy, Fiyero is really the agent of change in the piece. In truth, because both Glinda and Elphaba met Fiyero each of them was changed forever. Matthew Croke, standing in for a holidaying Jeremy Taylor, is an excellent Fiyero; appropriately handsome, light on his feet, with a dazzling smile and hair that begs to be tousled, he is the personification of the fairy tale love interest. Dancing through Life is splendidly done and Croke’s duet with Andreou’s Elphaba, As Long As You’re Mine, full of passion. Croke exudes style and charm and completes the central trio with dashing distinction.

Katie Rowley Jones, the original West End Nessarose, is back in the saddle, and her performance has matured and developed beautifully. Rowley Jones is quite wonderful as the crippled sister to Elphaba, bringing every ounce of resentment and disappointment and anger to her terrifically judged turn. There is a controlled desperation to her Act Two scenes which is particularly compelling. She is in excellent voice too. Sam Lupton provides good support as Boq, especially in Act Two. He has a true voice and good stage presence, but needs to imbue his early scenes with more exuberance and slightly less earnestness.

Martyn Ellis strikes a good balance between mystical leader and Machiavellian maverick in his performance as the Wizard. He does manage the improbable task of lining up the various aspects of the Wizard and making a coherent, whole character come to life, albeit one that seems quite like an Ozian cousin to Nicely Nicely Johnson. Still, there is a charm to this larger than life dissolute which is undeniable, and, in the second Act particularly, he shines. Liza Sadovy strikes all the right notes, comic and malignant, as the obsequious Madame Morrible and is especially good when she turns on Glinda, her composure rattled by annoyance.

There is excellent work from Philip Childs as the harassed and then defeated Doctor Dillamond, and Kyle Anthony is splendid as Chistery, his final awkward words a potent symbol of hope.

Wicked is tremendous shape and the current cast gives it full value. If you have never seen it or if you have seen it, now is the time to go again – you too could be changed for the better.