Helena Payne reviews Kneehigh Theatre’s The Flying Lovers Of Vitebsk at Wilton’s Music Hall and finds it to be funny, beguiling and achingly romantic.

The Flying Lovers of Vitebsk is one of Kneehigh’s most enduring shows. In various iterations it has lit up stages and other more daring performance spaces across the UK and internationally for nearly 20 years. There must surely be something special about a production with that track record, so I was delighted to settle in to Whitechapel’s Music Hall, Wilton’s, which charms its patrons with just the right amount of bohemian dilapidation to see 2018’s version. The play relates the story of the relationship and marriage of painter Marc Chagall and his luminous wife and long-time muse, Bella Rosenfeld. The show feels as fresh and inventive as anything coming straight out of development and it is funny, beguiling and achingly romantic in equal measure. 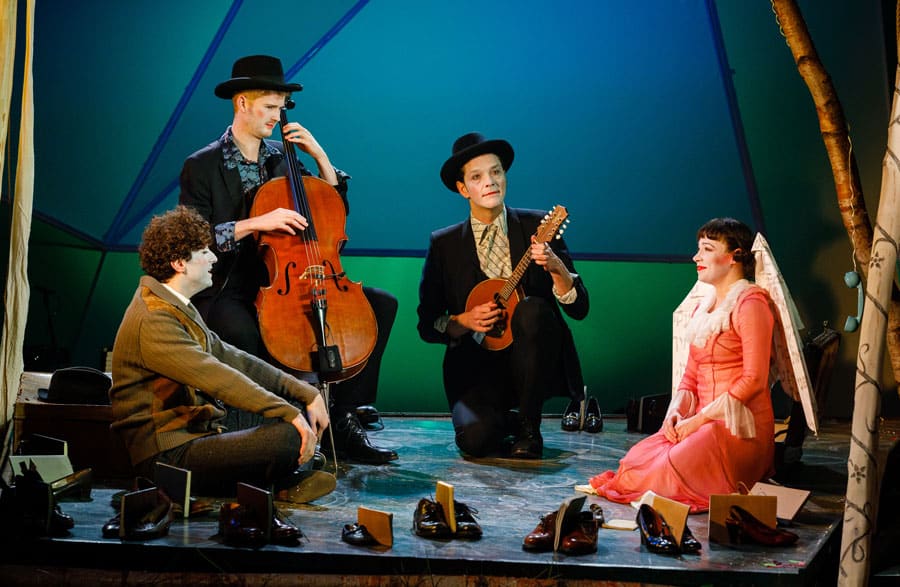 A solitary chair sits on a jauntily raked stage surrounded by a sort of makeshift climbing frame, a clear nod to the tragically exiled and dispossessed lovers as they attempt to make a home out of whatever they can find. There is no mystery about Kneehigh’s performance style, in a Brechtian pre-show the two actors and two musicians mill and tune their instruments whilst the audience chatter away. After a catchy jazzy duet, we meet an exasperated Marc Chagall played with verve by Marc Antolin as he is interviewed over the phone by his son in law Franz with regards to the deeper meanings of his paintings. The answer to the question, “Why does he paint?” appears in the form of his wife Bella, played delightfully by Daisy Maywood. They tell their love story through quirky dance, song, monologues and scenes all underscored by the fantastically sensitive musicianship of Ian Ross and James Gow. Their chemistry between Maywood and Antolin is palpable and their companionship and trust intrinsic. The portrayal of their meeting is magical, signified through the letting go of a bright red balloon representing Bella’s pal Thea leaving them alone in the room. A striking visual to highlight the magnitude of this moment for both characters.

It is a familiar yet extraordinary love story of leaving home and striving for more than fate has expected of you. Yet to any creatives in the audience their arguments over the pull of an artistic career and the responsibility of family life speak as poignantly as ever. Some of the funniest episodes include the hysterical chair outfits they don to represent the “horah,” their “milkmoon” and the dramatically ironic discussion of the virtues of actors and the theatre. Whilst touching lines include “Can you hear my eyes?” as they stand looking at each other: words to describe a sensation which feels true for anyone who has been in love. Their daughter Ida’s transformation from child to fairy with some expert paper folding and the emotions and colours they describe drenching them when they’re together are pieces of theatre that will stay with me. The say that “necessity is the mother of invention,” and this is evident in Flying Lovers, the relative paucity that Rice talks about in Kneehigh’s fledgling years has prompted funny and inventive dramaturgical choices, but the hindsight of time seems to have focused the themes of this production on the plight of immigrants and those who are displaced from their own homes.

There is a reason this show has endured so successfully. The story is beautifully told in the way that only theatre can, and the enduring romance and power of the couple’s love is enough to even have a community of hard-nosed theatre critics, “industry professionals” and despondent teenagers sobbing in the aisles. The pair of multi-instrumentalists and multi-faceted actors are all we need to be transported to the captivating world of Marc and Bella with its bright colours, swirling skies and green cows. Go see it with someone you love and remember how fortunate you are to have each other.

BOOK TICKETS TO THE FLYING LOVERS OF VITEBSK