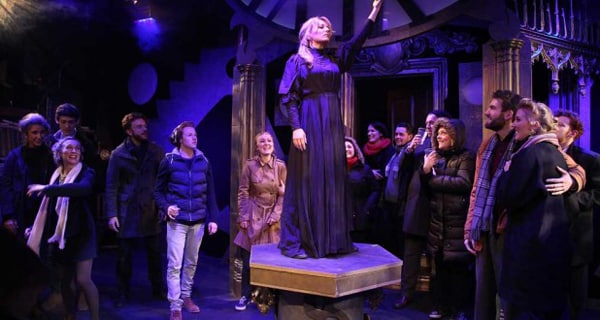 In the fifth season of Buffy, The Vampire Slayer, Spike, the vicious, machiavellian, but ultimately heroic (and always thrilling) Vampire is gifted a robot of Buffy. The robot serves a number of plot purposes, but it was created because of Spike’s desire to have a substitute for the real Buffy, one he could love. In so far as the series concerned fantasy creatures such as vampires and werewolves, this sort of plot device was par for the course in some ways, inspired in others. Because Spike was already dead, the repulsion factor was low.

Equally, in the same series, Xander’s love for a 1000 year old vengeance demon, Anya, was understandable, framed as it was by the bizarre and fantastical elements of the storyline of Buffy, her Scooby gang and their enemies and friends. Buffy was exemplary fantasy – but it had a lot to say about real modern concerns, such as peer pressure, coming out, emerging sexuality, jealousy, obsession, revenge, self-interest, the price of power and the power of love and sacrifice.

This is, of course, one of the great things about fantastical tales: they can deal with serious moral issues in a way which is seamless and thought-provoking, but entertaining across the spectrum, because the superficial plot lines provided comedy and drama in their own right, often in magical or romantically heightened situations.

If you were to bill a new musical as a serious exploration of lustful obsession, the power of the pack mentality, the ostracising of those who are different (for any reason, race, gender, sexual identity, poverty, lack of opportunity, health issues) and the inherent misogyny of society, especially against disadvantaged women, would anyone go to see it? I doubt it, even if Stephen Sondheim wrote the score. Of course, he did write that musical, the fractured fantasy fairytale, Into The Woods, but it was not billed that way – ever. (But that’s another story, never mind…)

Now playing at the Landor Theatre is The Clockmaker’s Daughter, a new musical (specifically, an original musical faerytale) with book, music and lyrics by Michael Webborn and Daniel Finn. Together with Duncton Wood, now playing at the Union Theatre, The Clockmaker’s Daughter completely makes the case for there to be created a National Musical Theatre, properly funded from the Lottery funds, which has the sole purpose of developing, workshopping, and refining new musicals. These works abound with excellence, particularly in terms of their scores, and deserve significant and substantial support.

In the programme, Webborn and Finn state their purpose:

“When we first began writing ‘The Clockmaker’s Daughter’, the one thing we were certain of was that we wanted a new fairytale. We wanted all the trappings of the traditional form: the magic, the fantastical feel, the supernatural elements, the moral core and the simplicity that comes with the genre’s narrative. But it had to be new; it had to be different”.

In this, they have wholly succeeded.

The Clockmaker’s wife has died, childless. He, Abraham, a master craftsman of timepieces, fashions a clockwork female for companionship. But he creates more than he bargained for, and when he winds up his creation, by inserting a large key into her back, she comes to life. He tries to keep her presence hidden, but the creature he has made, Constance, is rapacious for knowledge and experience. She reads a lot, studies and remembers, then ventures into the world – where she finds loss, joy, acceptance, love, revulsion, hatred and, eventually, death. There are many tricks and surprises along the way, but that is the essence of the tale: as magical, fantastical and moral as they come.

It is also new, different. Yes, the cake Webborn and Finn have baked here might be one pound Frankenstein, one pound Pygmalion, a cup of Phantom of the Opera, heaped tablespoons of Beauty and the Beast, a pinch of Pinocchio, and a soupçon of Buffy, but it is, as Jerry Herman might have said, its own special creation.

Set in a suitably rustic Irish village, it is full of familiar characters: the fusty, doddery Mayor; the Mayor’s handsome son; the Mayor’s handsome son’s beautiful bride-to-be; the pained, lonely, hermit-like master-craftsman; the forthright Village Seamstress (a kind of cross between Mrs Potts and Ursula) her daughters and son; and the villagers. Almost everyone is poor or at least not rich, but all seem happy enough.

Then, the bride-to-be’s expensive, irreplaceable wedding dress is ruined in an accident involving the village well, and disaster and misery stalk the village. Into that melting pot strolls Constance, unsure, exploring the world outside her own. She whips up a replacement dress, much better than the ruined original, and brings presents and does good deeds for the villagers. Eventually, they uncover her identity as the mystery benefactor and celebrate her – not to mention take advantage of her.

Abraham warns Constance that the village will reject her if her true nature is discovered. In truth, he wants to keep her for himself. Constance, having tasted life outside Abraham’s solitary house, wants more and, perhaps unsurprisingly, is caught out in the village, when her timing mechanism ceases, and she freezes, needing to be rewound. Abraham, in front of the village, literally winds her up and she comes back to life. But the village has turned…

To say more would be to unforgivably spoil a story which has several real surprises before it ends. Suffice to say that magic and love both have a significant role to play in the unfolding of events, though not, perhaps, in the usual Disney way.

It’s a great story, but the show’s most glittering treasure is its music. There are folk tunes, love songs, impassioned ballads, comedy numbers, patter songs, soaring melodies, complex harmonies and splendid polyphony, all with a sprinkle of Irish jig around the edges. It’s a score that screams out for an accomplished orchestration, involving many strings, reed and woodwind, to unleash the natural forces of the composition in an enthralling way.

As it is, under Webborn’s musical direction, the small band and the cast of twenty combine to give a real sense of the inherent power and attraction of the score. They are helped in this in no small measure by a superbly assured delivery of the most difficult, and gorgeous, music by Jennifer Harding who excels in the central role of Constance.

Harding has a rich, vibrant, perfectly supported and sustained voice, with a strong belt and a free, luxurious top. It is a joy to listen to her tackle the big numbers here, to enjoy the fusion of her artistry and the passionate score. Her diction is impeccable, and she has that rare ability to give proper measure to every note and convey entirely the meaning of every word and the overall sense and scale of the emotions and dynamics of the score.

On top of her skills as a singer, Harding is in scintillating form in the acting department. It is difficult to play a clockwork creature in a way which emphasises both the inhumanity of her mechanical nature and the emerging romantic soul that comes from the magical alchemy of her interaction with the villagers. But Harding pulls it off spectacularly well.

With his customary aplomb, Robert McWhir directs proceedings with skill and clarity. This is, in truth, a big, epic piece of musical theatre. It would be seen at best advantage on a big stage, with stunning sets and costumes; a proper sense of scale as befits the fairytale conceit. That McWhir manages to make such a piece work as well as this on the intimate space that is The Landor deserves real credit. It’s ambitious and it pays off.

Robbie O’Reilly does good work in the choreography department and David Shields makes the set intriguing and playful, evoking different locations very well. The sense of time and clockwork is ever present in the set, but not in a way which is tedious or tired. Unfortunately, Richard Lambert’s lighting does not do either the set or the company too many favours – there may have been a blown spot the night I attended, because things seemed very odd in that department.

There is a lot of tremendously committed work from the company, with especially good turns from Emily Peach, Ryan Lynch, Kathryn Laura Aiken and Paul Bradshaw. Alyssa Martyn is very sweet as Amelia, and she is impressive indeed in the second Act scene where she challenges the pack mentality of the village and raises moral questions in an effective way. She has a quiet but pleasant voice which is juxtaposed against her strength of character.

Alex Spinney (Henry), Rob McManus (Mayor Glynn), Alan McHale (Will) and Max Abraham (Sam) all have moments of inspiration in their roles, all look and suit their parts, but could all afford to be more assured in their delivery.

Jo Wickham’s Ma’ Riley is too grotesque a caricature to bring the pathos and heart the character should deliver; Natalie Harman, as her daughter, Rhiannon, takes her cue from Wickham, which is understandable, but it means the complexity and interest of her character is somewhat lost. In both cases, less could most definitely be more.

As Abraham, the titular clockmaker, Lawrence Carmichael does not bring to the role what is needed. It is difficult to hear the words he sings and, more often than not, there are serious pitch problems. Much of the exposition and emotional foundation rests on his shoulders, and while there are undoubted moments of insight, the burden is too great for him to bear.

Partly, this is to do with the writing. His first solo is difficult to understand because his back story is not made clear before it happens; his interest in Constance is written as very creepy in parts of the narrative; and, although he creates Constance, and is key to the best surprise of the show, the part is not written as kind or friendly in many respects, and so requires the sort of delicate handling that comes with parts like the Beast in Beauty and the Beast, but without the pay-off that the Beast is given in his narrative. Also, there is never a chance for Constance and Abraham to have a musical number where the joy in their unique relationship is made clear. All of these matters combine to make the role of Abraham a colossal ask – when, given the richness of the material, there is no need for that ask to be so great.

This is an engaging, absorbing, fantastical musical, radiant with possibility and truth. It’s confronting in parts and heartbreaking in others. And it is full of magical moments. Potentially, a truly great British musical.

One thing is for sure – you won’t be watching the clock while you watch The Clockmaker’s Daughter.