Mark Ludmon reviews The Brief Life and Mysterious Death of Boris III, King Of Bulgaria: Part The First by Joseph Cullen and Sasha Wilson presented at The Vaults London as part of the Vault Festival 2020. 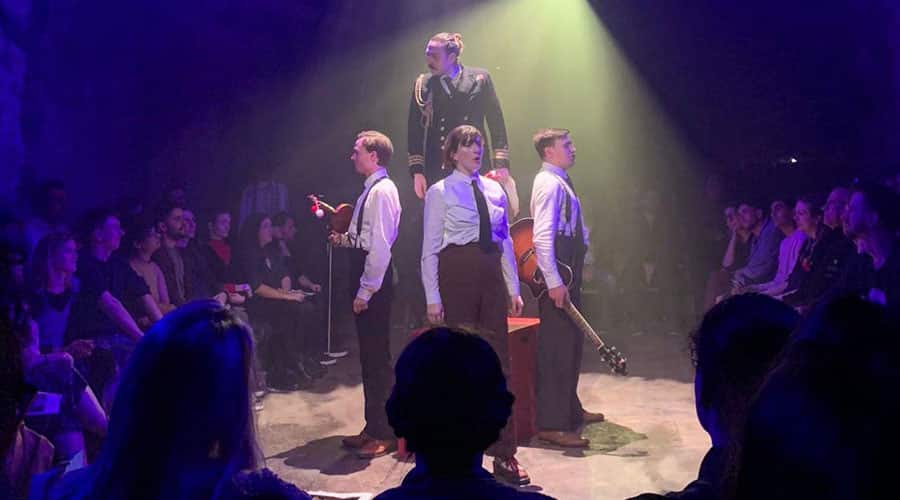 A largely forgotten story of World War Two – at least forgotten to those of us in Britain – is retold in Out of the Forest Theatre’s new show, The Brief Life and Mysterious Death of Boris III, King of Bulgaria. With a darkly satirical tone, it reveals the dangerous game played by the Bulgarians in trying to placate Hitler while attempting to save the lives of their Jewish citizens from the Holocaust.

As the show emphasises, history is messy and hard to fit into a simple narrative, but Out of the Forest cleverly and entertainingly explores the questions and ambivalent morality of Bulgaria’s efforts to ally itself with Nazi Germany while resisting its control. It is playful and funny but also succeeds in tackling the more serious sides of the story by highlighting what can be achieved when good people stand up to evil and injustice.

Joseph Cullen, who wrote the show with Sasha Wilson, leads the cast as an avuncular king Boris, an uneasy ruler who struggles with the impossible decisions that war presented him. All the other parts, from pro-Nazi politicians to religious leaders, are played by the rest of the excellent cast: Wilson, Kara Taylor Alberts, David Leopold and Joseph Prowen. A finely tuned ensemble, they bring another layer to the storytelling through live music and song, from Bulgarian tunes to new takes on English pop.

The show is subtitled “Part the First”, presumably reflecting Out of the Forest’s intention to develop it into something longer and more complex – they admit to having much more content up their sleeves that wouldn’t fit into a 60-minute slot. However, this tightly paced and precisely staged show has none of the hallmarks of a work in progress, turning a complex episode of European history into an enjoyable and irresistible piece of theatre.