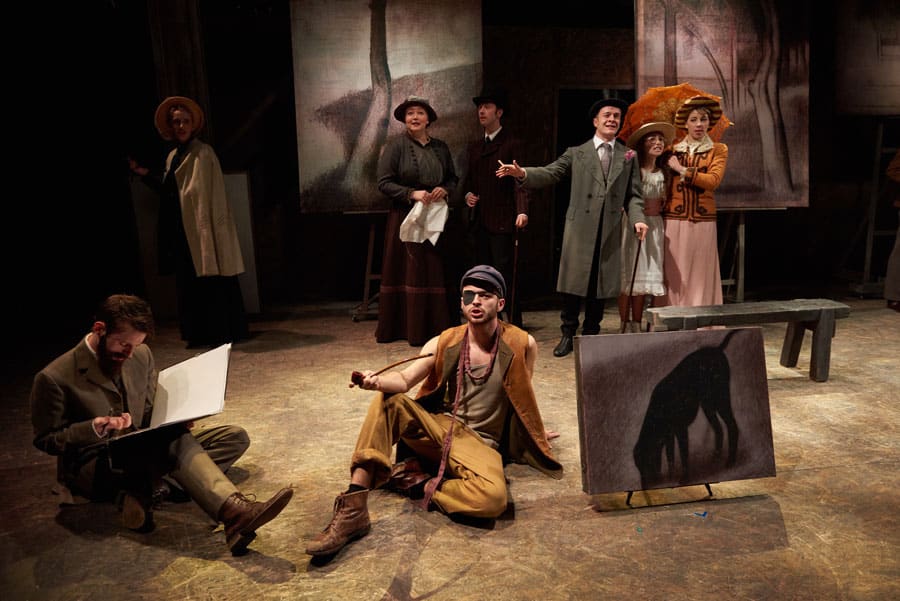 Sunday In The Park With George
National Youth Music Theatre at The Other Palace,
Saturday 19th August 2017

Andrew Lloyd Webber, who has a lot of experience with them, says the hardest thing about musicals is they have so many different elements that to get them all to work together to create a unified effect is very, very tricky: it takes a great deal of hard work, and also a lot of luck.  Any number of things can go wrong, and they often do; but when things work together… the results are magnificent.  In the case of this headline production by the NYMT, a favourite company of his and well established in its summer season at this address (as well as in many other leading theatres up and down the country), magnificence has been achieved.

Director Hannah Chissick, who scored a terrific success last year with NYMT’s revival of Ben Till’s stunning new Great War epic musical drama, ‘Brass‘, at the Hackney Empire, returned to the company full of insights into how it functions – and how to get the very best out of its fine players, recruited from the most talented young actors and musicians across the country.  Working with accomplished choreographer Sam Spencer-Lane and superb designer Matt Kinley, with veteran lighting designer Mike Robertson and leading industry sound designer Avgoustas Psillas, Chissick and tireless producer Jeremy Walker have assembled a cracking team of the best professionals to support the work of these young people.  And they also have a trump card up their sleeve: upcoming musical director Alex Aitken, whose work on ‘Brass’ last year propelled him into national attention, and who here, directing from the keyboard in the gallery at the back of the stage, achieves wonders with orchestral parts reduced to a tiny chamber ensemble of six (Michael Madigan, 18, reeds; Emilia De St Croix, 18, and Jamie Faulkner, 21, violins; Ellie Blight, 19, cello; Chris Poon, 21, keys 2), focussing the attention of listeners upon the voices of the actors. 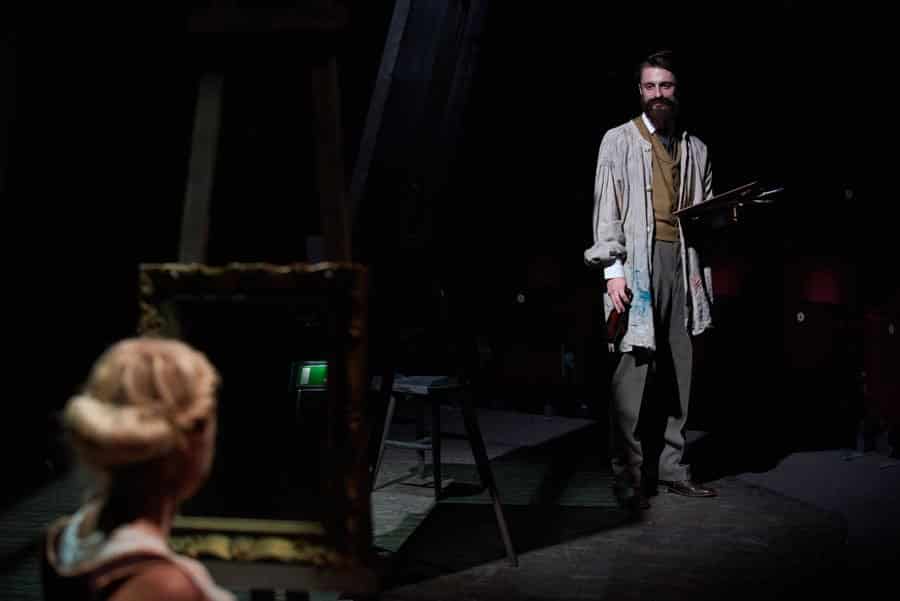 This work is about the challenges of art and demands nothing if not complete artistic commitment from its creative team, cast and band.  Seen through the refracting prism of one of the most curious and thought-provoking of late 19th century French masterpieces, Georges Seurat’s ‘Un dimanche apres-midi a l’Isle de la Grande Jatte’, it is a partly autobiographical and generously re-imagined interpretation of the stories that may or may not have lain behind the artful collection of images composed in the arrangement we know as the finished painting, and that has hung in the Art Institute of Chicago since 1924.  Seurat is famed for his pointillist method of applying paint to canvas, and this gets attention in several places in James Lapine’s astutely taught and vivid script, but for my money Seurat is more fascinating for the way he continues more venerable traditions of French painting, in particular where it concerns character and narrative. 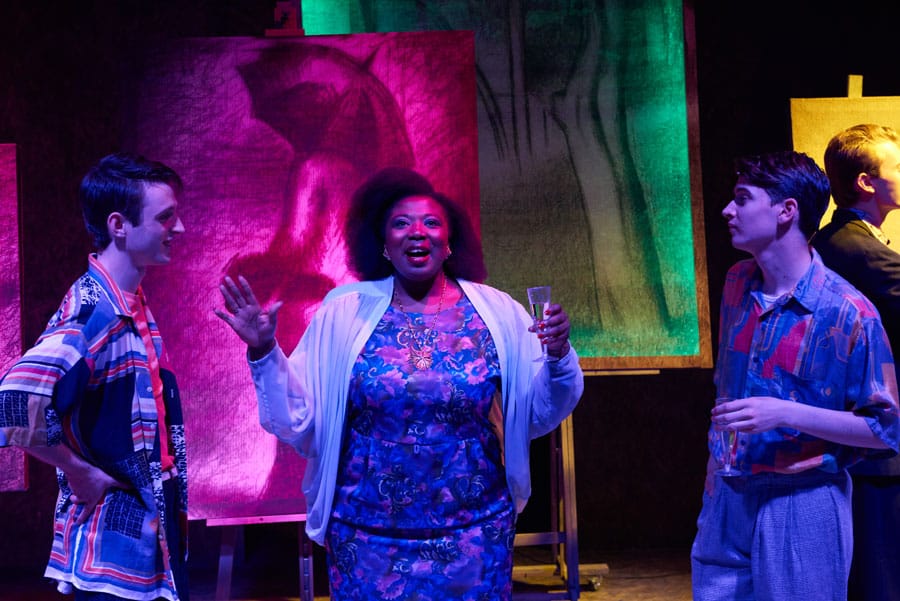 Rather like that inventor of the French romantic pastoralist genre, Antoine Watteau, before him, Seurat sketched individuals endlessly, and then rigorously chose which of them to put together, and in what kind of ensemble, for a canvas.  So, quite unlike the disciplined principles of the Impressionists, who insisted on only painting what was there, he was all about seeing things and then imagining what to make out of many different, often contrary, impressions.  In that sense, in respect to his grasp of form and structure, he has so much in common with his dramatic memorialist, Sondheim, who, in turn, finds in him and his attitude to life and creation a metaphor for his own love and creative destiny.  Thus, this is not just a musical, it is part of a grand conversation stretching over centuries and spanning continents: it is, in fact, about humanity itself.

This tremendous philosophical sweep is difficult enough for adults to grasp, let alone communicate, so how much more remarkable, then, does this stunning production appear, when we consider the perfection of execution achieved by this company.  In the leads, Laura Barnard (21) asserts authority and maturity from the outset as the artist’s muse, Dot: the most varied role – she has to double as her aged daughter in the second act, before coming back as her own ghost – it is also far and away the most theatrically demanding; with vocal and dramatic skills of the highest calibre, Barnard announces here she is amongst the best interpreters of the role this country has seen or heard.  Alongside her, the less sympathetic part of Georges, played with staggering credibility by 19-year old Thomas Josling, is a minefield of problems, none of which seem to have stood a chance against this expert actor with a lush and perfectly controlled voice, and the intelligence to recreate the artist’s turbulent and vital mix of youthful energy and iron dedication.  Between them, they make you believe completely in who they are and what they’re doing.

And in a way, that is what the play is about.  Although it begins conventionally enough, apparently following the recognisable structure and conventions of musical theatre, bit by bit, as it progresses, it takes us further and further away from what we know, until – eventually – it is reaching out into wholly unknown territory, and – most wonderful of all – we the audience are ready to go with it wherever it wants us to go.

The reason for the success of this production is that it utterly understands the intention of the work, and it does not permit any single detail to intrude without insisting it is earned.  Even a sudden and fleeting whisp of stage smoke is demanded by a passing reference in the script.  And thus it is with every single visual component of the mis-en-scene, the elegantly moving easels and canvases that make up the entire substance of these people’s universe; there isn’t a single move by an actor on stage that doesn’t continue the eloquent articulation of the driving force within this incredibly assured and evocative realisation.  In short, this is not just about ‘Art’, it is a conversation about what theatre is. 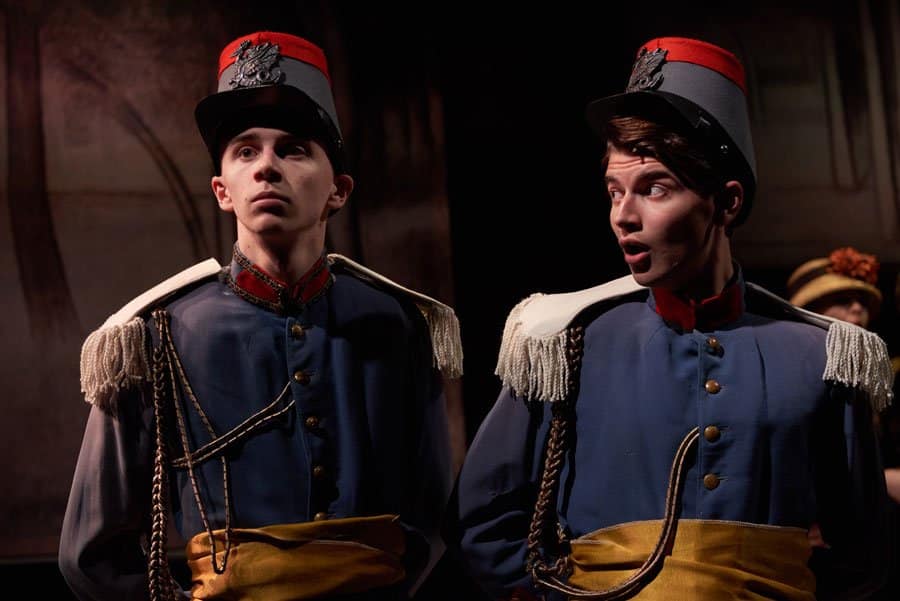 Playing second fiddle to the leads are the more conventional Jules (Adam Johnson, 20) and Yvonne (Florence Russell, 19): they are playing the Snows to the others’ Bigelows, of course, and they are part of Sondheim’s discussion, nay – discourse, embedded in the show regarding the very nature of musical theatre and his own relationship with it.  The various pairs of characters who revolve around them seem to be visitors from works he wrote either before or after this: the Old Lady (Eloise Kenny-Ryder, 19) and her Nurse (Lucy Carter, 18) are straight out of ‘A Little Night Music’, while the Soldiers (Marcus Harman, 18 and Scott Folan, 17) seem on the point of turning into the Princes from ‘Into The Woods’.  And so it goes: here, and there, and everywhere, we see and hear echoes of Sondheim’s mind at work.  But, perhaps that is what we all experience when we look at art?  What else, after all, does it invite, if not a response from the mind.

When the story shifts to Chicago a century later in the second act, and everyone gets to play a different part!, Kinley’s design really holds the whole show together: his sparing use of colour in an otherwise monochrome world makes the audience yearn for not only pigment, but its truthful and meaningful use.  The ghastly mockery of the modern ‘installation’ rigged up by the descendant of the painter (also played – unnervingly unrecognisably – by Thomas Josling) and his technical goons, the Chromolume, is sad, rather than laughable, its melancholy feeding off the frustration the purveyor feels when he knows himself to be lost, unable to express anything with any depth.  For this, we have to return – as we did at the end of the first act – to the work’s finest moment, the transcendental chorale of ‘Sunday’, a piece of such forthright humanism that it demolishes all that has gone before it, and speaks directly to the heart with immense force and passion.

Yes, there are still people who say there is no ’emotion’ in Stephen Sondheim.  They have obviously never seen this play.  They should.  And, perhaps, soon, they might have another chance to.  Meanwhile, this brilliant memory of this NYMT production will shine in the hearts of those who were fortunate enough to see it.  For those who didn’t, then all I can say is, please – if you can – try and find time to see the productions of this astonishing young company.  Your life will not be the same again.

FIND OUT MORE ABOUT NYMT